In some recipes, tripling one ingredient might lead to disaster. But in Honeybee's line of popular Blood Orange Strawberry fruit gumdrops, tripling the THC content — from 100mg to 300mg — has made no difference to the fruit flavors imbued into each drop by chef Dave Owens.

"It's still such a small amount," says Owens, the director of culinary for Proper Brands and its line of Honeybee edibles. "Even with these high-potency versions, we didn't find any real impact so far in the taste or in the consistency."

Along with the gumdrops, Honeybee is rolling out a similarly upgraded version of its peanut and pretzel chocolate bar, its ten pieces containing a total of 300mg. Made with European milk chocolate, roasted peanuts and crunchy pretzel, the bar is marketed as "a grown-up version of a childhood favorite."

It's a product informed by Owens' previous role as a chief chocolatier for Bissinger's — though he notes that, as a high-end confectioner, he was often working to keep costs down in a very competitive marketplace.

In cannabis, things are different. A bag of gumdrops can sell from $35 to $40 in a St. Louis dispensary, and the new "high potency" varieties are selling for $75. For a confectioner, that price point means greater latitude to use ingredients like premium fine chocolate and real fruit.

"We have more flexibility," Owens says, though he also adds that he's just as excited to create new flavors for Honeybee as he was as a chocolatier for a storied confectioner like Bissinger's.

"The creativity is certainly still here," Owens says, and jokes, "We had 350 years of history at Bissinger's; we've just had a year here. So we're still working on building that. We've only got 249 more years to go."

Putting aside whether Owens and Honeybee can last to the year 2270 (we're hoping humanity can make it that long, at least), Proper Cannabis co-founder Matt LaBrier points out that time is an important variable when talking about increasing a product's THC potency. In a state where cannabis has been legal for little more than a year, patients with limited edibles experience can innocently intake more THC than they intend.

Safely eating edibles takes a level of caution. It could be the difference between eating half a gumdrop and a full one, and LaBrier says that Proper, which produces the line of Honeybee edibles, has had to consider the relative inexperience of Missouri patients when determining just how strong to make its products. He references the advice he offers to cannabis users trying an edible for the first time: "Start slow."

"We were trying to be cognizant that this was a new market, and we didn't want to come out of the gates with a product that had a chance of being ingested and being too much for folks," he explains. "But, pretty quickly after opening our door and selling Honeybee all over the state, we kept getting feedback that there was a market for higher-potency edibles."

Indeed, even with the candy and chocolate designed for taste, patients who rely on edibles for relief from pain and insomnia may find themselves eating and spending more than they'd like to attain the same effects. 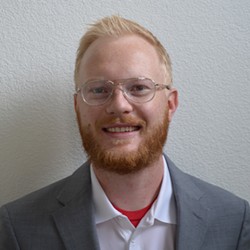 Proper's Honeybee line of edibles isn't the first to reach the 300mg benchmark for high potency in Missouri. Through a partnership with Kansas City-based cannabis producer Clovr, the Colorado edibles powerhouse Robhots offers two flavors of 300mg THC gummies, Peach Mango and Blue Raspberry, with each pack containing ten candies of 30mg THC each. The products sell for around $90 in St. Louis-area dispensaries.

A Kansas City native, Robhots founder Zack Romey has seen his company expand from Colorado into multiple cannabis industries. Like LaBrier, he credits public demand for higher THC content in edibles for driving the company to offer steadily stronger varieties; that includes a 1,000mg product where each gummy contains 50mg of THC, significantly more than Missouri's current crop of high-potency products.

"You have people who really can't eat a bunch of sugar, but they can eat a small gummy that has the high dose that they need," Romey points out. "With our products, what we really found successful is they taste great and there's consistency. You're never going to have a patient who eats a gummy and they get way more than a 50-milligram dose or a 30-milligram dose."

Romey says he expects Missouri cannabis patients to see more high-potency edibles on dispensary menus, especially if the competition creates pressure for lower prices. Based on his experience in Colorado, he sees the availability of 300mg Robhots products as "stepping stones" to 500mg, and perhaps more.

"I get emails a couple times a week from people saying, 'I have this condition, I was on this list of prescription narcotics,'" Romey says. "Now they're just eating our gummies."