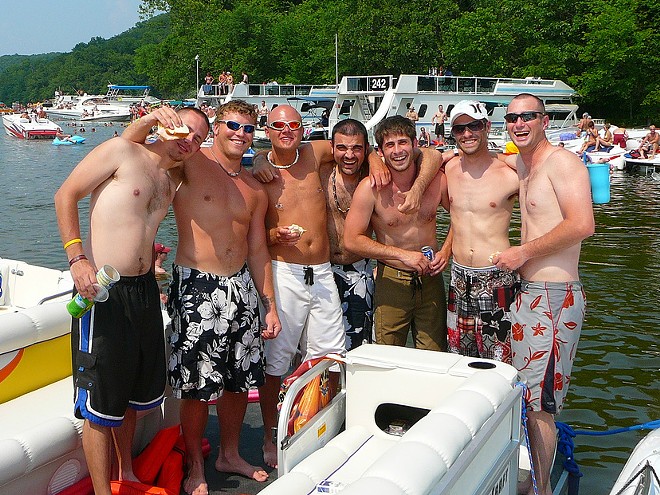 This week Missouri was faced with a particularly serious bit of news: Someone is turning Party Cove into a reality show.

At this floating frat party on the Lake of the Ozarks, every weekend hundreds (sometimes even thousands) of boats show up, and partiers prepare to either see or be seen doing all manner of naughty business. Captains tie groups of boats together, creating temporary islands where drinkers can hop from boat to boat in search of fun.

Party Cove was already a hot spot for Girls Gone Wild type of filming, so it was only a matter of time before entertainment executives caught on to our local slice of shame. And the man in charge of exposing our dirty little secret to the world is not just anyone, but Doron Ofir, the “king of reality TV casting.” He’s been the casting director for more than 100 reality productions, including Jersey Shore and Ru Paul’s Drag Race. This TV show will be legit.

The website advertising the casting call says Ofir is looking for “the most interesting, craziest, hottest, loudest 21+ SUMMER VACATIONERS who are ready to hit the lake and share the summer of a lifetime with us.” Go ahead, fill out the application. Make your family proud. Maybe your mom even got her taters out there when she was your age.

Here are five things Missouri should expect — nay, demand! — to see on Ozark Shore or whatever they're calling this thing:

1. People slipping on boats and eating shit
With all of the drinking combined with all of the boat-hopping, accidents are bound to happen. Collisions on the water are common, but usually not as bad as they could be because of the area’s strictly enforced speed limit. If partiers injure themselves, it's more typically from slipping and falling on slick boat surfaces. As revelers climb from boat to boat, water droplets and spilled beer combine to make one hazardous drunken playground where not everyone succeeds at keeping his or her teeth inside their head.

2. Humans of all social strata partying together
Party Cove is the great equalizer. Here, multilevel million-dollar yachts post up next to battered pontoon boats, everyone united in their desire to witness debauchery and get their drink on. Sure, sometimes the ultra-rich show up being flashy and try to slum it, but that’s okay. The authentic members of the Redneck Riviera don’t mind who you are or where you came from... as long as you’re down to flash your fun bags.

3. A bro in wrap-around sunglasses
Going to Party Cove might as well be a sport, so you can’t really blame these bros for strapping on their best gear. Plus, if the glasses are reflective, it’s hard to see where the gent is resting his eyes, affording him a nice long look at the natural buoyancy of mammary glands. After sunset, he’ll wrap those Oakleys around the back of his head like he’s Guy Fieri. This is the signal that the bro is ready to attempt procreation.

4. People banging in the putrid lake
You know how sometimes people are swimming together and then they start hugging each other in the water? And then one of them shuts his eyes, drops his head and bites his lip just a bit? Yeah, they ain’t huggin’. That’s called “hoosier humping.” (Okay, we just made that up, but that’s what we’re calling it now.) Public sex is common and even encouraged here but be warned: everybody is filming. Even before the reality TV cameras get there, you’re still being recorded by your boat neighbors and uploaded to the web, so bang with a bag over your head or something.

5. Disgusting detritus floating on the water
Have you ever seen a barf-puddle float on water? Don’t worry, you will. There’s an urban legend that you can get gonorrhea from this water, and that seems pretty reasonable, honestly. More often than you’d expect (or could even attempt to prepare yourself for), you’ll come across a sailing prophylactic. When you first see one, you might think that it’s a small jellyfish riding along the surface, but then you remember that jellyfish don’t hang out in lakes and that it’s just a nasty used rubber and that the world is shit.

But whatever, most of these sights will just give you one more reason to drink until you drop, thus continuing the Party Cove circle of life. Ah, it’s a beautiful thing. See you on idiot box.