9 Ways to Celebrate July 4th Weekend for $11 or Less 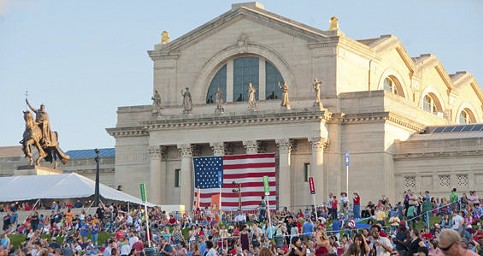 If you're like us, you're settling into a three-day weekend, which means you have an extra day to pack in some fun. And whether you intend to hit Fair St. Louis for some Blondie, catch the fireworks down at St. Charles' Riverfest or see some star-spangled burlesque, there are plenty of possibilities.

Here are our picks for nine ways to celebrate our nation's birthday this weekend, all for $11 or less. Bonus: At least eight of them involve exploding pyrotechnics. The Chinese may have invented fireworks, but to us, nothing says America risking life and limb just to witness the pretty colors.

1. Catch the best team in baseball -- and great fireworks, too This year the best fireworks downtown will be at Busch Stadium (Broadway and Poplar Street; 314-345-9600 or www.stlcardinals.com) when the St. Louis Cardinals face the revamped San Diego Padres in a four-game series during the Fourth of July weekend. While the Cardinals are fending off the Pirates and Cubs, San Diego is looking for a spark to help catch the Giants and Dodgers in the National League West. Bombs could be bursting in air — the Friars rank among league leaders in giving up the longball. The Redbirds celebrate Independence Day with giveaways at three of the games — from replica 1982 World Series rings to camo-print jerseys. First pitch is at 6:15 p.m. Thursday, 7:15 p.m. Friday, and 1:15 p.m. Saturday and Sunday (July 2 to 5), and tickets are $10.80 to $365.80. — Rob Levy

3. Get your fireworks with a side of Toad the Wet Sprocket O'Fallon's Heritage and Freedom Fest offers more bang for your buck this Independence Day with three nights of family fun, from 5 to 10 p.m. Thursday, 5 to 11 p.m. Friday and noon to 10 p.m. Saturday (July 2 through 4) at the Ozzie Smith Sports Complex (900 TR Hughes Boulevard, O'Fallon; www.heritageandfreedomfest.com). Little patriots can romp in the Kids' Zone, which is packed with inflatables, craft areas, Hula-Hoops and giant checkerboards (with checkers), while the older crowd has access to the carnival rides and the midway games. There are also a ton of bands playing on two different theme nights: Country night (July 3) has Gloriana, Locash and the Well Hungarians, and Rock night (July 4) sees Smash Mouth, Toad the Wet Sprocket, Tonic and Superjam. And of course, there will be fireworks displays on Friday and Saturday. Admission is free, but you'll need money for concessions and to buy ride tickets. — Paul Friswold

5. Celebrate America with a rock-n-roll clown Clownvis Presley, everybody's favorite rock & roll clown, is back in St. Louis and back in action for the Fourth of July and his very own Clownvis Candy Cola Explosion. In honor of our nation's birthday, Clownvis ends the show by jumping into a seven-foot-tall can of cola while handcuffed and wearing a suit covered in Mentos. The Miss Molly Simms band provides the soundtrack, and Lola Van Ella and Foxy La Feelion will also be present. Sat., July 4, 8 p.m., $10. The Bootleg, 4140 Manchester Avenue.— Paul Friswold

Turn the page for more 4th of July fun, including details about Fair St. Louis