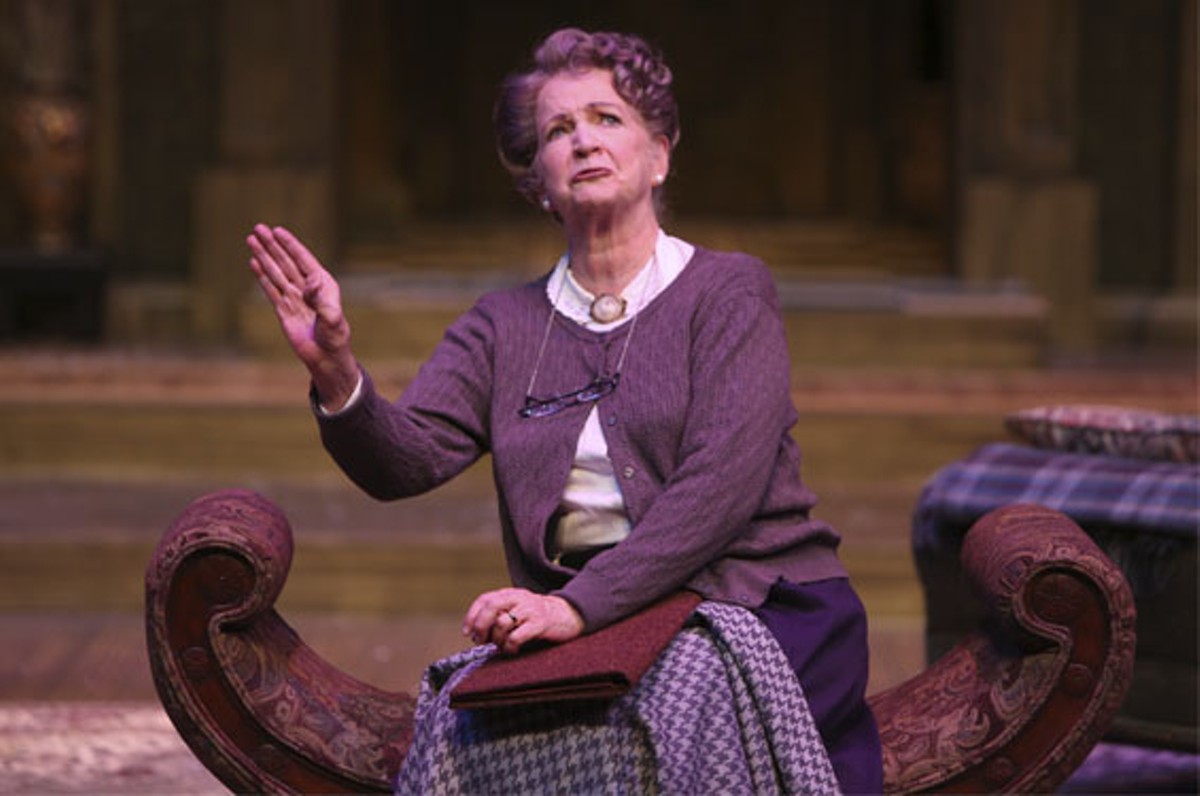 An aura of nostalgia permeates The Mousetrap, this month's holiday offering at the Repertory Theatre of St. Louis. Nostalgia, due not to the advancing age of Agatha Christie's 1952 whodunit – nor because of any affection for its lofty stature as the world's longest-running play. Nostalgia, rather, for those artisans who year after year collaborate at the Rep with expertise and imagination.

The rendering of a musty old manor house 30 miles from London is yet another splendid example of scenic designer John Ezell at his most extravagant and detailed. When you grow bored with Christie's play, this expansive set will keep you intrigued. Ezell's creaky old house has been illuminated by the subtle yet caressing lighting design from Peter E. Sargent. Now add to this mix the character-revealing clothes thoughtfully designed by Dorothy Marshall Englis, who apparently has an entire team at her disposal, solely charged with keeping pants creases razor-sharp. For so many years now, Englis, Ezell and Sargent have comprised a formidable designing triad.

Still more nostalgia emanates from the actors. Darrie Lawrence has returned to portray a nagging guest at Monkswell Manor. Lawrence's vivid work at the Rep includes a textured performance in the resonant 2005 staging of The Road to Moscow. To see Lawrence again also is to be reminded of that unexpected occasion seven years ago when she so triumphantly stepped in for an ailing Cherry Jones in Doubt at the Fox. Memorable. Tarah Flanagan is another returning actor who elicits fond Rep memories – brilliant in Lobby Hero, valiant as Saint Joan. Flanagan is one of those rare actors who seem incapable of delivering a false line reading. Because she is always spot-on, Flanagan becomes mesmerizing to watch: Will she ever miss?

Paul Mason Barnes, one of the most inventive (Stones in His Pockets) guest directors to work at the Rep, has filled out his Mousetrap ensemble with a talented bunch. The sweetly plaintive Ellen Adair and the forceful William Connell portray the young couple who discover that innkeeping can be harmful to one's health when guests get murdered. As one of the more flamboyant visitors, Sean Mellott models his performance through the eccentricities of a young Truman Capote. Michael James Reed is admirably restrained as another of the expected guests; Larry Paulsen is aptly ambiguous as an unexpected arrival.

Yet all this fine work from actors and designers alike is mostly in vain, because the venerable, even historic Mousetrap is an empty vessel. Agatha Christie was to playwriting what Antonio Salieri was to nineteenth-century music: a popular hack. Christie's magic name may sell theater tickets, but she knew nothing about the dramatist's craft. The stultifying Mousetrap piles up exposition higher than the snowdrifts that have isolated Monkswell Manor. Typical of Christie, the plot builds on incidents that occurred a generation ago. Although this format might work in a narrative novel, a stage play requires sustained action here and now, not verbose descriptions of events from the distant past.

Forget action; how about a laugh or two to relieve the talk? Christie did not know how to write humor. ("Oh, my pie!" does not elicit guffaws.) When the evening's perkiest moment is a recording of Glenn Miller's "Chattanooga Choo Choo" during the curtain call, you know you've endured a lifeless night.

Do you want to solve a real mystery? Try this one. Why is it that, despite the play's absurdly long 61-year run in London (and another 26 years in Toronto), The Mousetrap has never been produced on Broadway? Here's one possible explanation: Perhaps because the play's iconic reputation would be sorely tarnished were a New York staging to shutter as quickly as it opened (which it surely would). Theaters can get away with mounting this kind of claptrap out in the hinterlands, but it's tough to fool more discerning Broadway theatergoers. Just ask the producers of that other legendary whodunit, Moose Murders. 