After Leaving Cherokee, Future Ancestor Is Now Open in Shaw

Megan Anthony
Julia and Brian Leenig, owners of Future Ancestor.
On a quiet corner in the Shaw neighborhood, a popular Cherokee Street transplant opened the doors of its new location for the first time this weekend.

After first launching online, the Leenigs opened their brick-and-mortar store on Cherokee Street's Antique Row in 2014. But as the shop rapidly grew in popularity, the couple began looking for a new spot that would allow for expansion. They finally settled on the storefront in Shaw, saying the space that previously held Restituo Cafe and then Nom-Enu just felt natural.

Megan Anthony
This mid-century chair and ottoman exemplify the store's modern look.
Julia Leenig describes the shop as having a "modern living" style, with the couple mixing old and new items to create a unique, collected and curated look. "We aren't necessarily antiques. I think it's a nice way to differentiate us," says Leenig. Many times, she says, customers would come into their Cherokee Street location expecting the antiques offered by their neighbors rather than the shop's minimalist vibe.

They are looking forward to getting to know their neighbors in Shaw.

"There's a lot of young homeowners in this area," says Leenig. "This demographic seems a little more interested in being settled and homemaking,  where Cherokee is such a lively restaurant and bar scene." Future Ancestor is one of just a few retail options in the area. "I think it's kind of a nice asset," Leenig says, "bringing some retail to the area. The neighbors we've met so far seem excited."

While Brian, 35, studied at the Art Institute in Nashville and has a background in interior and retail design, Julia, 31, has worn many hats. She began as an English major, went on to pastry school, and spent some time as a stay-at-home mom. However, she says, everything she has done is connected back to her love of making a home. "I liked the aesthetic of it all," she says. "Even as an English major, I did it because I liked the way it looked. I liked the idea of having a lot of books," she adds, miming out stacked books in a library.

The store is painted all white, but the vibrant fabrics and long couches make it feel warm. With plants and prints hanging from the walls, it's easy to picture your own home boasting the same intuitive design skill on display in the store. An apartment above the store still in the planning stages, but the Leenigs says they plan to incorporate it into the grand scheme of Future Ancestor — perhaps as a space for classes or a show room.

The Leenigs are excited for what the future holds and are also grateful to their friends on Cherokee. "They're really proud of us. We're all friends and it's all great," says Julia. "It's nice that our old space is now open for a new person to start."

Along with a new location, Future Ancestor also has new hours. The store is open Thursday through Sunday from 11 a.m. to 5 p.m. Other days may be open by appointment. 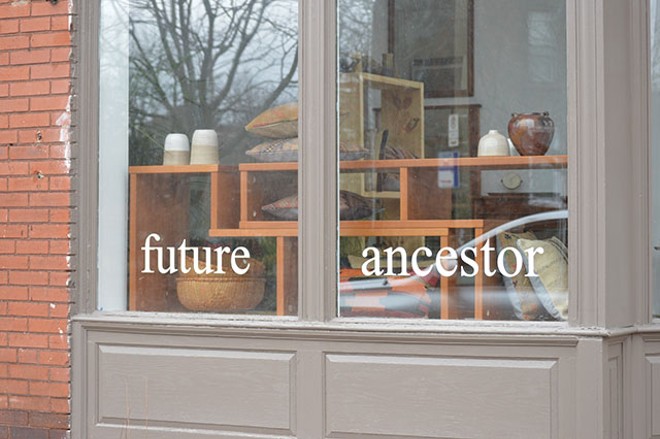 Editor's note: A sentence in this story was revised after publication to better reflect the Leenigs' feelings. Also, we edited the hours the store is open. We regret any confusion.