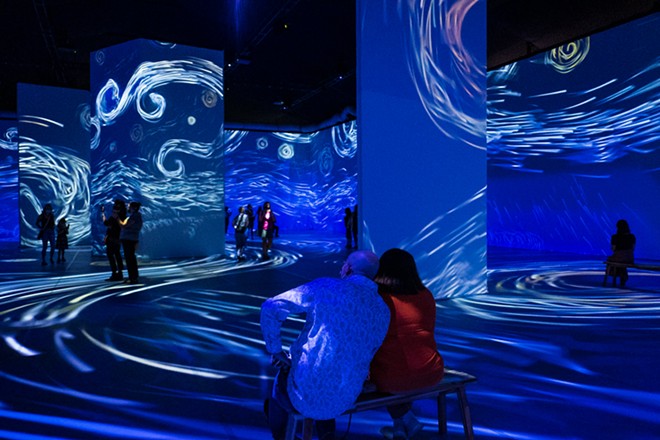 As images swirl and change at the Starry Night Pavilion (1155 Galleria Parkway), it’s hard not to get goosebumps while standing in Vincent Van Gogh’s paintings. Beyond Van Gogh: The Immersive Experience has brought St. Louis a new way to observe the artist’s masterpieces, and now, it’ll be staying longer than anticipated.

More than 100,000 people have seen the exhibition in St. Louis, according to the newest press release. A previous press release cited "immense popularity and high demand" for the first extension. Organizers of the event expressed gratitude and excitement that the exhibit has received such positive acclaim from St. Louisans.

Co-producer Justin Paquin said in a statement he was “thrilled” by the reviews and looked forward to more fans being able to see the show. Beyond Van Gogh: The Immersive Experience was created by a team of people at Montreal’s Normal Studio, including creative director Mathieu St-Arnaud.

“We are so grateful and of course honored by the audience’s positive reaction and enthusiasm towards the experience,” St-Arnaud commented in a press release. “Since its early inception, we knew we wanted to create a very personal and awe-inspiring experience for the audience. When we feel the appreciation, it’s hard to put into words the wonderful feeling it gives you. It’s why we do what we do and it makes all the hard work worth it.”

Alongside the extension, the exhibit announced an effort to “keep live alive.” A $5,000 grant will be given to one St. Louis-area high school for the creative arts. It’s a partnership between the exhibit and nonprofit Keep Live Alive Saint Louis that “serves to keep the Arts alive in St. Louis,” according to their website. High schools are encouraged to apply at keeplivealivestl.org. The grant applications are open until December 3.

The exhibit is open 10 a.m. to 10 p.m. Sundays through Thursdays and 10 a.m. to 11 p.m. Fridays and Saturdays, with four entry times available each hour. Tickets range in price from $24.99 to a VIP package at $93.99. Visit vangoghstlouis.com to purchase tickets.

Jenna Jones is one of the digital content editors at the Riverfront Times. She would love to talk to you about Harry Styles.
Scroll to read more Arts Stories & Interviews articles (1)