Bob Dunnell
St. Louis writer Gabe Montesanti launches her memoir Brace for Impact on Thursday, May 26, at 7 p.m. at the .ZACK Performing Arts Theatre, in an event presented by Left Bank Books.

With roller derby, getting injured is not an if. It’s a when.

That moment came for Gabe Montesanti, 28, on a Sunday morning in April 2017. There’d been a deluge the night before, and blown-over garbage cans littered the flooded streets as she made her way to practice. Because there were holes in the roof, the arena floor was wet and slick with yesterday’s rain.

But that’s not why Montesanti fell.

“I fell doing something that I had done a million times, which was transitioning from backward to forward skating,” she says. “My wheels hooked together, and I just fell with my whole body weight on top of my left leg. I heard it splinter, like I heard it snap inside my body.”

She knew immediately that it was broken but — raised to tough things out and deny her own pain — she insisted on being transported to the hospital in the back of her own car by one of her teammates and didn’t receive morphine until hours later. She says that her wife, Kelly Bresnahan, describes the sounds the unmedicated Montesanti made as “barbaric and rabid.” 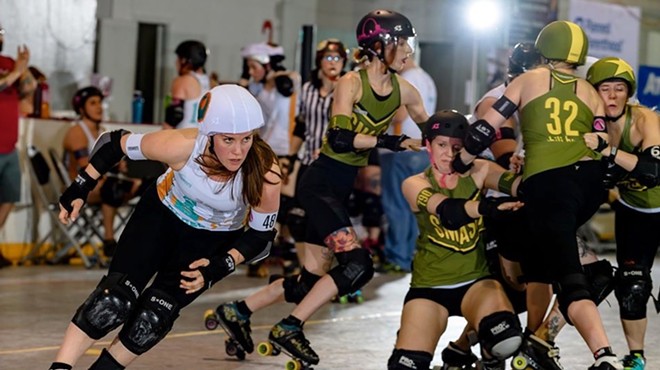 
The fall had “pretty much shattered” the leg: Both bones broke, and Montesanti’s tibia had a six-inch spiral fracture. She temporarily lost sensation in the leg and, for a while, wasn’t sure if she’d be able to walk normally again.

Montesanti delves into that pain, if she should return to the arena and all things roller derby in her memoir, Brace for Impact, which The Dial Press, a Random House imprint, publishes on Tuesday. She’ll officially launch the book into the world on Thursday, May 26, at 7 p.m. at the .ZACK Performing Arts Theatre (3224 Locust Street,St. Louis; 3 14-533-0367), in an event presented by Left Bank Books. The launch is free to attend
click to enlarge 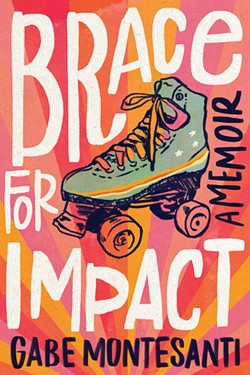 Brace for Impact isn’t only about playing for the renowned St. Louis Arch Rival Roller Derby team, though. In it, Montesanti weaves in her memories of growing up in a conservative Catholic household in the rural Michigan town Howell as well as swimming competitively and coming into her queer identity in the Midwest.

“It was hard growing up where I grew up, and it was a very closeting thing,” she says. “I graduated with 650 students, and not one of them was out, including me.”

Being in a conservative religious environment ingrained “repressed homophobia and this resistance to claim any label” in Montesanti. At age 18, she started dating women while a student at Kalamazoo College, telling herself it was a phase. But being in a liberal environment and reading Alison Bechdel’s graphic novel memoir Fun Home brought on the slow process of accepting herself and her queer identity.

Meanwhile, she was realizing that the little essays and stories she’d written throughout her life might be her future. A class taught by Diane Seuss (who won the Pulitzer Prize in poetry this year) made Montesanti realize she wanted to pursue writing seriously.

But derby — unlike questions of identity and careers — didn’t take it slow.

Montesanti recalls being approached by a openly queer, beautiful woman in a coffee shop in Bowling Green, Ohio.

“She just said, ‘You look like you would be a real threat on the roller derby track,’ and I said, ‘What are you talking about?” Montesanti recalls. “I felt really seen.”

The first day she had internet after moving to attend the creative writing MFA program at Washington University, Montesanti looked up St. Louis roller derby teams. In September 2016, she began “fresh meat,” the three-month recruitment class for Arch Rivals.

When she first started, Montesanti was terrible. But it didn’t take long for her to get obsessed. Pretty soon she was skating every day, even in her apartment.

Passing the skills test the following January and getting drafted felt amazing.

“The thing I think that makes roller derby so different from any other sport I've done is there’s no real body type that's ideal for skating,” Montesanti says. “The first thing they told me in St. Louis on the roller derby track was, ‘You're a beefcake. We need beefcakes on our team.’"

“It felt wonderful to be accepted and necessary in the body that I currently occupy,” she continues. “So I was completely enamored by the sport and all the queer people who are part of a team.”

Going to school and playing derby turned out to be a tough balancing act. But Montesanti justified it by making it the subject of her thesis. Things built from there.

In 2018, she found an agent, Markus Hoffmann. In 2019, an excerpt won a nonfiction contest from St. Louis-based literary magazine Boulevard (disclosure, a journal that this reporter edits) and that publication was recognized as a notable mention in the anthology Best American Essays. In May 2020, Montesanti received a 17-page letter, then a phone call, from Dial Press Senior Editor Katy Nishimoto detailing how they’d revise the manuscript.

Montesanti and Nishimoto spent the next year working on the book, and then another preparing for publication. Now, it’s about to be out in the world.

“I'm terrified,” Montesanti says. “I'm truly ecstatic. I have never experienced this degree of excitement in my life.”

Attend the launch event for Brace for Impact on Thursday, May 26, at 7 p.m. at the .ZACK Performing Arts Theatre.