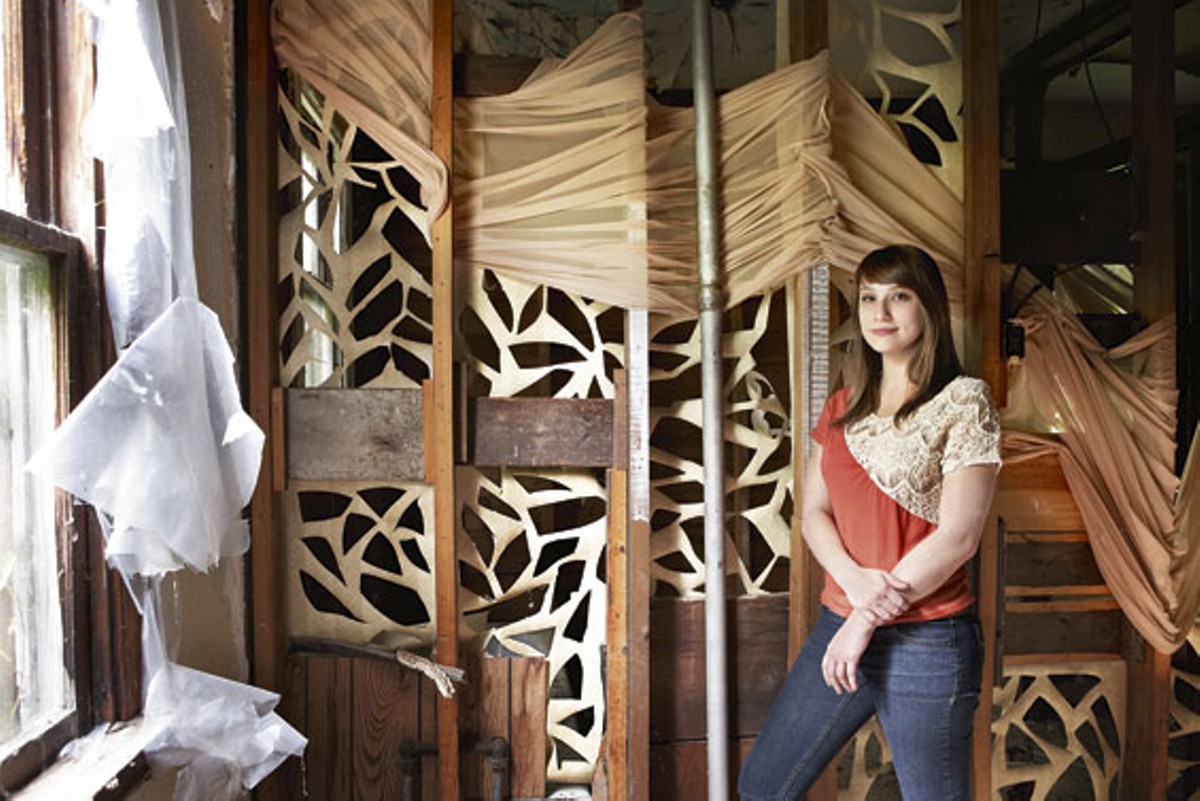 Carlie Trosclair's most recent installation was born amid bat shit and cobwebs. When the 26-year-old first laid eyes on the forsaken space that would become Kowalsky Intervention, she knew her days of working in tidy, sterile art galleries were at an end.

Trosclair would spend hours in those rooms — the abandoned second floor of an artist's studio in Vermont where she completed a residency in June — scrubbing away mildew and battling mutant insects. She fell in love with the strata of decay and wanted to find a way to get people interested in the space again. In one room Trosclair sliced the antique wallpaper into rivulets that charted the cracks that erupted across the walls over decades of water damage and neglect. The space came alive, breathing through veins of floral screen-print and chipped paint.

The New Orleans native grew up wandering through empty, unfinished houses, as her father, an electrician, installed wiring for the families that would one day live there. Now she creates sweeping gestural landscapes out of fabric and other found material in the same sorts of spaces, years after the families have moved out and the wiring has come undone.

Increasingly she has come to understand her work through Freud's concept of Das Unheimliche ("The Uncanny"): the cognitive dissonance that can morph the comforting and familiar into the strange and frightening. Or, as Trosclair describes it, "This weird push and pull that develops from the relationship between something that draws you in because of its familiarity but then retracts you because it's also uncertain."

Familiar but distant: In many ways the description applies to Trosclair herself. She's affable and reserved — hesitant to use personal pronouns or discuss her private life, often speaking into the edges of space, as if her heart belongs to some other corner of the world.

In 2008, after majoring in fine arts at Loyola University New Orleans, Trosclair enrolled in the graduate program at Washington University's Sam Fox School of Design & Visual Arts and soon found her focus shifting from painting to full-scale installations. Marrying familiar tokens of domestic life — vintage wallpaper, for example, or sheer chiffon — with disused spaces, her work began to challenge a viewer's conditioned response to the built environment.

"We get accustomed to moving through doorways or walking into rooms a certain way. It becomes an action we don't have any type of physical relationship to," she says. "[I'm] thinking about how to reconstruct a space so that people think differently about how they move through it."

Jessica Baran, a St. Louis-based poet who writes about visual arts for Riverfront Times, says it is the expanding scale of Trosclair's installations, and her increasingly refined technique, that make her work so impressive.

"These 'interventions' are quasi-aggressive, but there's such a thoughtfulness to her execution," Baran says. "Her work is often disrupting the topography of a room entirely. But the disorientation that's created isn't sleight-of-hand or a bombastic experience. It's contemplative."

Two years after leaving what her friend Mallory Nezam refers to as "the Wash. U. bubble," Trosclair has found herself moving beyond the neglected structures that fueled her creativity post-grad school and into the communities that surround them. Her artistic impulse, she discovered, involved a significant social component.

"I met Carlie right as she was transitioning from grad school to working as an artist in the community. That was a moment of change for her practice," says Nezam, director of St. Louis Improv Everywhere and an intern at the arts nonprofit Creative Time. "I haven't seen a lot of artists from St. Louis make this transition as holistically and completely as Carlie has. She's recognizing now that there's a larger reason for her art. She sees that it's not just a personal practice — that it can really make an impact and resonate with people."

Social worker Regina Martinez first encountered Trosclair's work last year, at a show at the Luminary Center for the Arts.

"She is as open, wholehearted and curious as I know I've felt when I enter her installations," Martinez says of Trosclair, who's now a friend and creative collaborator. "Strung from one wall to the next, floor to ceiling, ceiling to floor — her work feels like an embodiment of different ways we connect."

Trosclair says she was nervous when Martinez invited her to create an installation in the Pink House, a community space in north St. Louis County where Martinez is coordinator-in-residence. Pink House is operated by the St. Louis-based Rebuild Foundation — whose founder, installation artist Theaster Gates, is well known for his focus on urban planning — in partnership with Beyond Housing, a nonprofit that works with low-income families.

Martinez and Trosclair met weekly for six months to hash out a concept that would allow the artist to collaborate with the Pink House's Pagedale neighbors. The result, The Chandelier Project, will consist of discarded chandeliers adorned with paper pulp hand-recycled by Trosclair with the help of neighborhood volunteers. Eventually, Trosclair says, she'll assemble the fixtures in the form of a bouquet or hive and display them in the house.

"It's sort of an alternative learning experience," Trosclair says of her weekly visits to the house, most of which she spends working on the project with kids who are drawn to the activity. (Sometimes not.) The Pink House project seems a natural complement to her day job as a supervisor at a local swim school. She never wanted to be "that lady who came in once a week and told people what to do."

Explains Trosclair: "As a kid you spend all day being told what to do, what to learn, how to act, and not often enough are you just asked questions about what you want.

"I don't want to just be a 'plop' artist," she adds. "I don't just want to enter and make something and then leave. I think the artist's job is to further facilitate opportunities for creativity and invite collaboration."

[Editor’s note: A correction ran concerning this paragraph; please see end of article.]
Earlier this year Nezam asked Trosclair to join her and Martinez in entering Good Ideas for Cities, a competition aimed at addressing some of St. Louis' most deeply entrenched problems. Tasked with confronting the city's abysmal 50 percent high school graduation rate, their team proposed "The Sight," a vacant building near a school, which students could rehab into a communal learning space.

Nezam says she pushed Trosclair to team up because she "secretly wanted to challenge" her friend to step out of her studio practice, which is very isolated and focused. Trosclair says the collaboration, much like The Chandelier Project, has had a profound effect on her own artmaking.

"I've met people who have lived here for a long time, and they say things about how sad it is that there are so many vacant buildings here," she says. "But now I feel like there's a lot of energy around the idea that this is space that has potential to be something. There are a lot of people really excited about what we can do with these spaces."

Correction published 8/23/12: In the original version of this story, Mallory Nezam's name was misspelled. The above version reflects this correction.