History -- of sorts -- was made under the big top at Circus Flora in Grand Center at precisely 4:30 p.m. Monday when Aleysa Gulevich, one of the circus' star performers, broke the world record for hula-hoop-spinning. 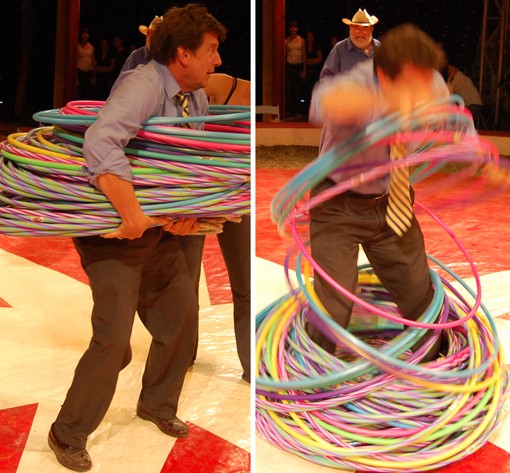 Carlos Martinez, an adjudicator for Guinness World Records was on hand to certify Gulevich's feat and present her with an official certificate commemorating the occasion.


Video of Gulevich breaking the record after the jump...

It must be said that the outcome was never truly in doubt. Well, very little in doubt. Gulevich had to navigate Guinness' rigorous application process and, more significantly, pay for Martinez' airfare between New York and St. Louis. "I travel when a record is expected," says the adjudicator.

There was also the fact that Gulevich had reigned as the world-record-holder in this category before, in 2004 and 2007. (The category was first established in 1985 and has been broken seven times since then.)

Nonetheless, it was still pretty exciting.

The pile of 107 hula hoops -- in a vast array of colors and degrees of sparkle -- was painstakingly counted by Martinez, who then measured the diameter of the hoops with a tape measure.

"The hula hoops have to be standard," he explains, "33 inches in diameter and store-bought with no alterations. Then she needs to have three competed turns to set the record."

(Martinez was recruited to be an adjudicator by Guinness, who needed Spanish-speaking judges. In his native Spain, he worked in professional soccer. "At the end of the day, [world record-setting] is like a sports competition," he says. "You compete. You follow rules.")

A stack of 107 hula hoops reaches Gulevich's knees. She's not sure how much it weighs, but a rough and completely unscientific estimate by the Daily RFT puts it at around 50 pounds. While spinning, Gulevich wears a wide belt, of the sort used by weightlifters and other people who spend a lot of time picking up heavy things, to prevent back injury.

Gulevich, who is blonde, lithe and ageless (or at least unwilling to share her age with the Daily RFT), has been a hula hooper since she was a little girl.

"I started when I was 8," she remembers. "Like most girls, it was a toy, but then slowly I would practice tumbling with it and create tricks."

Photo: Aimee Levitt
Before the record-breaking attempt...
Gulevich grew up in the circus and performed in her first show, in Russia, at the age of five. Her mother, Nadezda Bilenko, was an aerialist, and her father, Fiodor Goulevich, a clown.

"I've done everything," she says. "Flying trapeze, comedy, unicycle -- I do hula hoops on a unicycle -- a hand-to-hand act, the aerial web, I've worked with elephants, no on elephants..."

But hula hoops are her area of expertise. She practices by lifting weights and by spinning smaller piles of hoops.

The world-record spin took fewer than ten seconds. With the help of her mother, Gulevich hoisted the pile of hoops up to her armpits, twisted her torso a couple of times, gave a big, professional smile, and let the hoops fly. They spun three, then four, then five times before the bottom-most hoop hit the ground.

There were applause and congratulations. Martinez presented Gulevich with the official Guinness World Records certificate. (Unlike a college diploma, it came in a frame.) Gulevich hugged her mom.

Photo: Nick Lucchesi
Aleysa Gulevich, left, and her mother, Nadezda Bilenko, herself a former performer, right before Gulevich broke the record.
Patrick Murphy, KETC-Channel 9's vice president of production, stepped into the middle of the pile of hoops and announced he was about to break the freshly-minted world record. (He did not, however, announce that he was going to shatter public TV's stodgy image.) He hoisted the hoops and wiggled his pelvis.