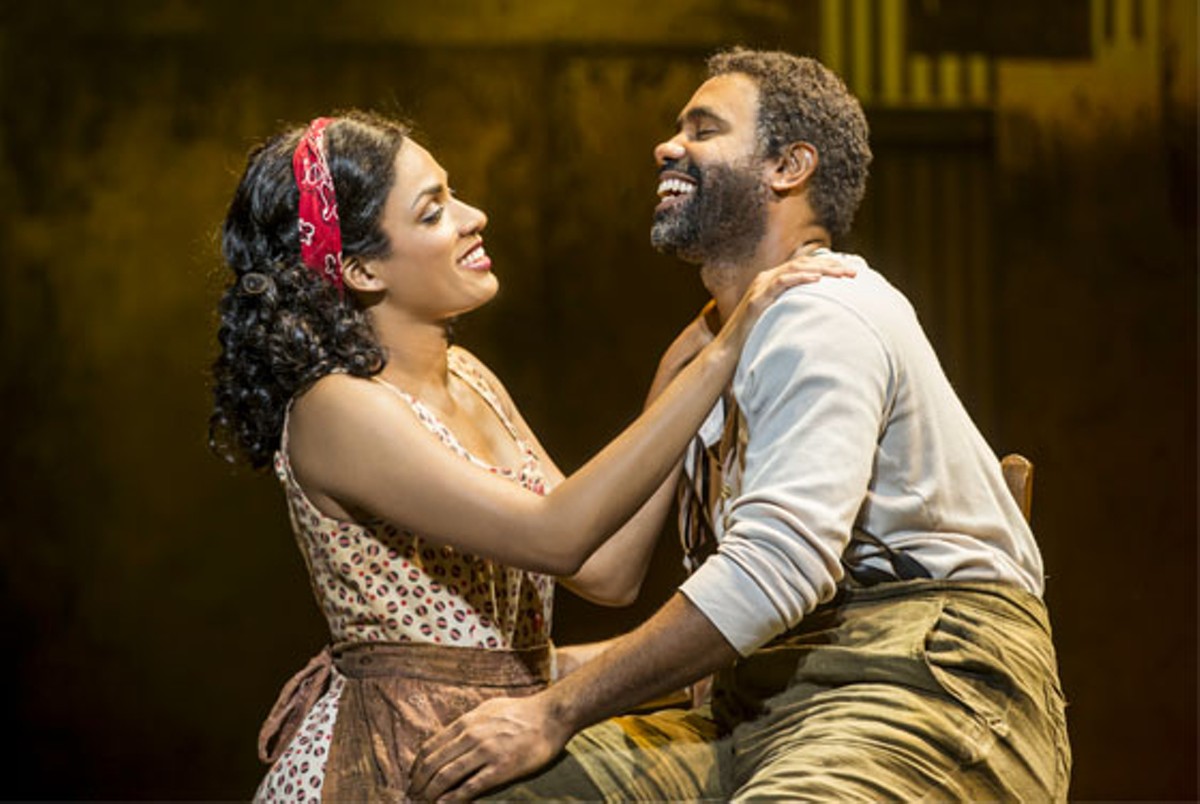 Despite everyone who braved the thunderclouds on opening night of the touring version of The Gershwins' Porgy and Bess, there was simply no getting around it: The Muny felt a little empty.

Now, depending on your perspective, that's not necessarily a bad thing. And this slick, digestible version — which reimagines Gershwin's multilayered tale of prototypical passion as a slightly emaciated and somewhat confusing love quadrangle — certainly has its moments of real wonder. Still, it's hard not to judge the production against its original, whose presence hovers above this bowdlerized retelling like the ghost of Hamlet's father.

Directed by Diane Paulus, The Gershwins' Porgy and Bess seeks to make the sprawling original more accessible to Broadway audiences, shrinking the show from an epic four hours to a dinner-friendly two and a half. Similarly, playwright Suzan-Lori Parks and composer Diedre L. Murray have introduced new dialogue, streamlined the score and rounded some of the characters' more inscrutable edges — transforming the opera's potent archetypes into more familiar characters.

Perhaps the most noticeable difference here is Porgy, who, in the opera, is a somewhat mystic cripple who begs for his supper and gets around by goat cart. Played by a handsome and honey-voiced Nathaniel Stampley, Porgy 2.0 ambles about on a cane — down on his luck, sure, but nevertheless a viable suitor to Alicia Hall Moran's marvelous Bess. He certainly seems as desirable as the volcanic Crown (the strapping baritone Alvin Crawford) or the snakelike Sporting Life (a terrific Kingsley Leggs).

Still, in many ways the musical hews closely to the opera's original plot, with the hard-living and tragic Bess falling for Porgy after her lover, Crown, kills a man and must go into hiding. As Bess assimilates to domestic life in Catfish Row, she is constantly tempted to stray by Sporting Life, the roguish dealer who wants her to move to New York with him, preying on her weakness for whiskey and "happy dust." But Crown hasn't disappeared. He's gone into hiding on Kittiwah Island, vowing to return for her. When he does, Porgy's ready for him, dispatching Crown with a knife, before being detained by the police. Meanwhile, Bess, who, in this adaptation, shows nothing but disdain for the unctuous Sporting Life, bafflingly heads to New York with the dealer, Porgy in pursuit a few days later.

Compared to the original, this adaptation at times feels like the CliffsNotes version. Still, it contains moments of real pathos, as when Bess, ensconced in domestic bliss with Porgy, succumbs to Crown in the wilds of Kittiwah Island, or when Porgy steels himself to murder Crown.

What also remains largely unchanged are many of the show's most breathtaking numbers. "Summertime," "I Got Plenty of Nothing," "It Ain't Necessarily So," "I Loves You, Porgy" — they're all there, and the very able cast certainly does them justice. In the role of Serena, Denisha Ballew delivers a real showstopper with "My Man's Gone Now," and Danielle Lee Greaves, a grounding presence in the role of Mariah, nails that anthem of disdain, "I Hates Your Strutting Style."

Played against Riccardo Hernandez's minimal set, here adapted for the Muny stage by Robert Mark Morgan, the primary performers are supported by a strong ensemble (the dance number that opens the second act is a genuine treat), their voices buoyed along by conductor Dale Rieling's delightful orchestra.

Yes, the shadow of the original Porgy and Bess may loom large here, but taken on its own terms, this new adaptation makes for an entertaining night of musical theater. 