An iridescent desert landscape. A lush, green garden. A playground in Cleveland, Ohio. The 2022 Great Rivers Biennial exhibition takes viewers to all these places — and more.

The Contemporary Art Museum (3750 Washington Avenue, 314-535-4660) celebrated the 20th anniversary of its Great Rivers Biennial exhibition earlier this month. Part of the museum’s fall/winter exhibition, the Great Rivers Biennial is a biannual collaborative initiative between it and the Gateway Foundation designed to foster artistic talent in the greater St. Louis metro area.
click to enlarge 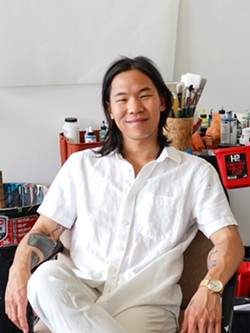 
Over 105 applicants vied for a spot in this year’s Biennial. The three winners, Yowshien Kuo, Jon Young and Yvonne Osei, each received $20,000 in unrestricted prize money and part in a major exhibition in the main galleries.

The Biennial is an open-call program, meaning there are no restrictions on who can apply.

“It really is about allowing opportunity and accessibility,” said Wassan Al-Khudhairi, chief curator at the Contemporary Art Museum. “It's such a unique opportunity because it's something that many cities don't have to offer artists.”

After the initial round of online applications, the jurors conduct a second round of deliberation via studio visits, so that even artists who don’t win have an opportunity to showcase their work. This years’ judges were Carmen Hermo, associate curator for the Brooklyn Museum Elizabeth A. Sackler Center for Feminist Art; Jen Liu, a New York-based visual artist; and Hamza Walker, director of LAXART, a nonprofit art space in Los Angeles, and instructor at the School of Art Institute of Chicago.

Although this year’s Biennial didn’t have a theme, all three of the artists gravitated toward questions of national and personal identity. Kuo, for example, explores what it means to be Asian and Asian American in his exhibition Sufferingly Politely.

“I feel like the sentiment in Asia is that the population is so high that the individual no longer becomes important," Kuo says. "And then, in the United States, that's transferred to all the kinds of stereotypes that exist around Asian Americans: quiet, reserved, not forefront in public; they won't make a scene, which means that often we're socially taken advantage of, even unconsciously. There's this sort of quiet suffering that occurs." 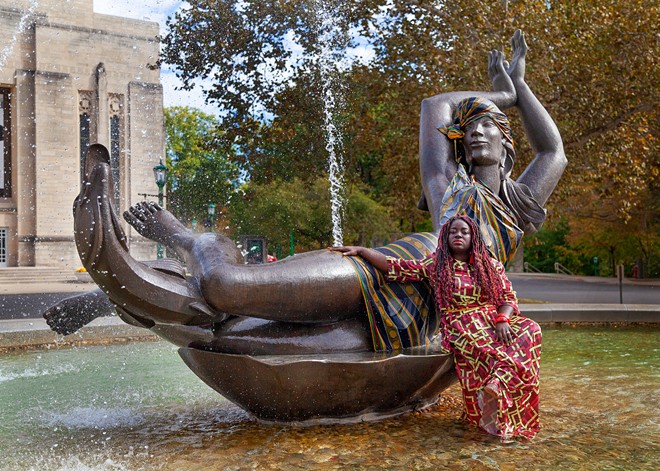 The exhibition, which features vibrant vignettes of debauchery backlit by neon lights and streaked with glitter, seeks to “tantalize” viewers, encouraging them to engage with and display the “quiet and invisible” aspects of themselves. To view the exhibition, patrons must remove their shoes and step onto a plush, white carpet, which Kuo says further invites vulnerability.

“The figures that you're going to encounter in the exhibition are essentially putting themselves in a very vulnerable state as they are navigating their way through reality and the dreams that they carry,” Kuo says. “The components of the installation are there to encourage you to also place yourselves in a state of dreaming, in a state of vulnerability.”

Yvonne Osei’s multimedia exhibition Brainchild explores Black youth and motherhood in the United States. Osei drew heavily from her experiences during her own pregnancy, of which she learned just one week prior to receiving the award.
click to enlarge 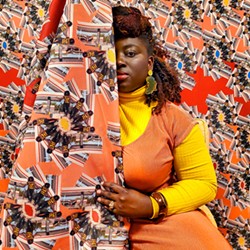 Courtesy Yvonne Osei
Yvonne Osei is one of the three artists in the Great Rivers Biennial.

To create the work, Osei embarked on a series of pilgrimages across the United States, visiting areas significant to the Civil Rights Movement, such as Selma, Alabama; and areas of more recent significance, too, such as the recreational center in Cleveland, Ohio, where a white police officer fatally shot 12-year-old Tamir Rice in 2014.

“This work really looks at promise and childhood innocence in the Black community and how that's not regarded,” Osei says. “'I’m not only thinking of pregnancy in the literal sense of birth and coming into the world, but I'm also thinking of how we're all pregnant with ideas, with ambitions, and not seeing them come to fruition; how much of a loss that is.”

The third exhibition of the Biennial, Jon Young’s The Other Side of Quicksand, reimagines the American frontier as something at once familiar and foreign. He spotlights recognizable symbols of Americana — such as cacti and picnic tables — but turns them mystifying with iridescent hues and unconventional materials, such as authentic desert sands and upholstery.

“I thought about the show as a spectacle, site-specific work,” Young says. “I pulled sands from either coast to this place that is considered ‘Gateway to the West.’”

Though visually alluring, the exhibition holds a deeper and darker meaning for Young, a citizen of the Catawba Indian Nation in Rock Hill, South Carolina.
click to enlarge

Courtesy Jon Young
Jon Young’s The Other Side of Quicksand, reimagines the American frontier as something at once familiar and foreign.


“There is mapping that's happening through the work, this mapping of collapsing symbols of the mythological West,” Young says. “It relates to my native heritage and my journey. It's like trying to make a map to get back to a home that hasn't existed for a long time.”

The Contemporary Art Museum urges art connoisseurs and amateurs alike to check out the Great Rivers Biennial, which will remain on display until February 12 next year.

“They have pushed themselves to scale up and create immersive experiences for people,” Al-Khudhairi says. “The shows are relevant; they're engaging with our current social and political climate. I think there's something for everyone in these exhibitions.”