Press photo
18andCounting is bringing the mod synths this time out.

New York's Pas Musique's self-described "electroacoustic frequencies for your inner mind" are self-explanatory, especially since the legendary project's approach to electronic music can be as abstract as they come. It was born out of New York City's experimental scene in 1995, and founder Robert L. Pepper has continuously evolved Pas Musique in a way that can be traced from early releases decades ago to 2022's Confluences 2, a recent collaborative effort with Robin Storey (Rapoon). Although Pas Musique has been known to feature seminal artists Jon "Vomit" Worthley and Michael Durek, this night will feature a solo performance by the founder. This event at the Granite City Art and Design District comes at the tail end of a nearly three-week tour that saw Pepper travel from the East Coast to the Midwest and back to perform with many groundbreaking electronic artists based throughout the country — including an exemplary lineup of St. Louis' finest.

A Man Who Wears Many Hats: Under the moniker 18andCounting, St. Louis native Stan Chisholm could perform as a DJ, rapper, live painter, sound artist or througany multi-faceted performance he decides to dream up on any given night. For this show? He's bringing modular synthesizers across the river for a rare experimental set that will no doubt expand time for all in attendance. 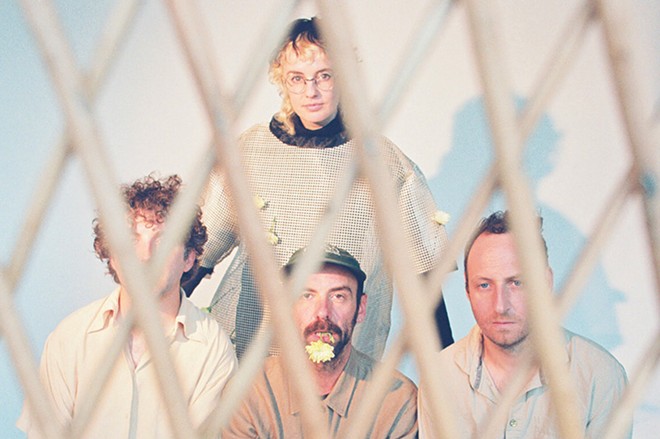 Via Bandcamp
Spread Joy drops in from Chicago to unofficially celebrate its new album.

Throwing salt over your shoulder, wearing your shirt inside out and avoiding black cats are all options when combating the bad luck that Friday the 13th supposedly brings. If you're not the superstitious type this might seem like nonsense, but if you are, consider this show as another way of tipping the scales back in your favor. St. Louis should be so lucky to host an event like this for free, although donations for the bands will be strongly encouraged. Even 10 or 20 bucks is a steal to see Spread Joy, the Chicago-based post-punk powerhouse that has been turning heads on a swivel since their incredible 14-minute self-titled debut in 2021. The band has been in regular rotation on radio stations and tastemaker blogs ever since, even earning repeat plays on godfather of punk Henry Rollins' weekly show Fanatic on the Santa Monica-based NPR affiliate KCRW. Although this event hasn't been advertised as a release party, Spread Joy's new album II technically comes out the same day as this show, and early adopters will have the choice of picking up the new record on Coke-bottle clear vinyl or the standard black.

But Wait, There's More: Spread Joy aren't the only hyped band playing Friday night. Baton Rouge, Louisiana art-punk outfit Spllit bring their jagged, disjointed set of songs to the historic former bathhouse William A Kerr Foundation to round out a night of music that will surely cleanse the spirit. 