Cry-Baby Is as Entertaining — and Timely — as Ever 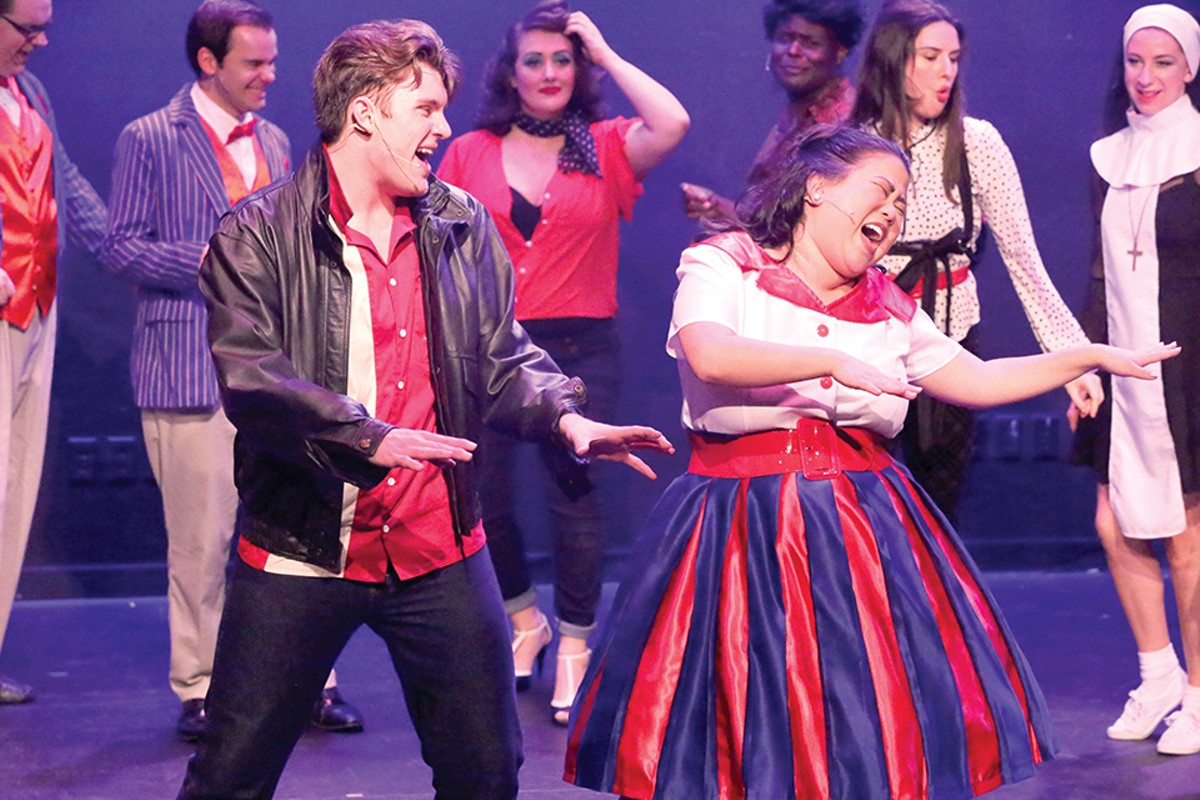 Cry-Baby and Allison (Caleb Miofski and Grace Langford) learn you can fight the system, if you have a whistleblower. JILL RITTER LINDBERG

Book by Mark O'Donnell & Thomas Meehan. Songs by David Javerbaum & Adam Schlesinger. Based on the film by John Waters. Directed by Scott Miller and Mike Dowdy-Windsor. Presented by New Line Theatre at the Marcelle Theater (3310 Samuel Shepard Drive; www.newlinetheatre.com). Tickets are $20 to $30.

I think it's important to mention upfront that New Line Theatre's current production of Cry-Baby is one of the most flat-out entertaining musicals you're ever likely to see. In fact, it's such a rambunctious good time that it's easy to overlook its sharper points about the dangers of blindly following the rules, the perils of failing to question why things are the way they are and the absolute mortal peril of settling for a stable sort of unhappiness when you could have true joy.

That's a great deal of very serious subtext for a show that is essentially about a greaser and a good boy fighting over the same girl. New Line Theatre has been doing this exact sort of musical for 29 years, and if you think co-directors Scott Miller and Mike Dowdy-Windsor can't hide any number of satirical razor blades inside a delicious caramel apple, you haven't been paying attention. New Line's Cry-Baby is as intelligent as it is beautiful.

Allison Vernon-Williams (Grace Langford) meets hard-luck drape (it's Baltimoreese for greaser) Wade "Cry-Baby" Walker (Caleb Miofsky) at an anti-polio picnic thrown by her grandmother, the stern and yet slightly warm Cordelia Vernon-Williams (the great Margeau Steinau). Allison and Cry-Baby are both orphans, and they feel an immediate kinship, which Mrs. Vernon-Williams immediately tries to quash; In 1950s Baltimore high society, one doesn't date the lesser classes. Allison and Wade are immediately smitten, and together they launch into the heights of one of the 1950s greatest rock & roll infatuation songs, "I'm Infected." The pair deliver a jaw-dropping performance, riding the tune's insistent piano and little sax riffs to a chaste (just barely) ecstasy. The fact that Miofsky is still in high school only makes it more impressive. Full marks also go to co-music director/keyboardist Nicolas Valdez and his four-piece band, who perform the show's old-school rock & roll with power and grace.

Their romance is blocked by both Mrs. Vernon-Williams, who reassures Allison that she can meet new people on her wedding day, and Lenora (Aj Surrell). The latter is a mentally unbalanced young woman who believes she and Cry-Baby are in love, despite his angry protestations. Surrell gives a truly bonkers performance as the screwy Lenora. (Keep an eye on her when she's in the background or you'll miss her brilliant physical comedy.) Allison has her own hanger-on in Baldwin Blandish (Jake Blonstein), a square who even dances smugly.

Baldwin has more than smugness in his corner. Because he's so square, authority figures (who are just grown-up squares) immediately believe him no matter how ridiculous the things he says are, a gift he uses to break up the young lovers. Blonstein plays Baldwin's sense of entitlement to the hilt. His Baldwin is every incel windbag puffed up with the belief that he's been wronged by the world because he's made himself unlikable. With his straight-laced glee club The Whiffles, Baldwin sings the insipid — and insidious — "Thanks for the Nifty Country." It's a song praising the Founding Fathers for passing down the power and privilege from white man to white man all these years. It makes Paul Anka sound like fucking Slayer, and it's perhaps the only song in the show Mike Pence would applaud.

And that's what the John Waters is warning us about. The "good old days" guys like Pence fantasize about are full of stiffs like Baldwin sending people like Cry-Baby to prison on trumped-up charges and sexually liberated women to reform schools, all in the name of staying on top. Of course, Waters arranges for a patriotic and loving whistleblower to reveal the truth about Baldwin to the world. By the end of the show Baldwin is out of the picture, Allison and Cry-Baby are free to love and all of Baltimore has learned a valuable lesson about giving strangers a chance. The show ends with the very tongue-in-cheek song, "Nothing Bad's Ever Gonna Happen Again," which is the sharpest arrow in Cry-Baby's quiver. Nobody ever learns nothing anymore, a fact we keep confronting.