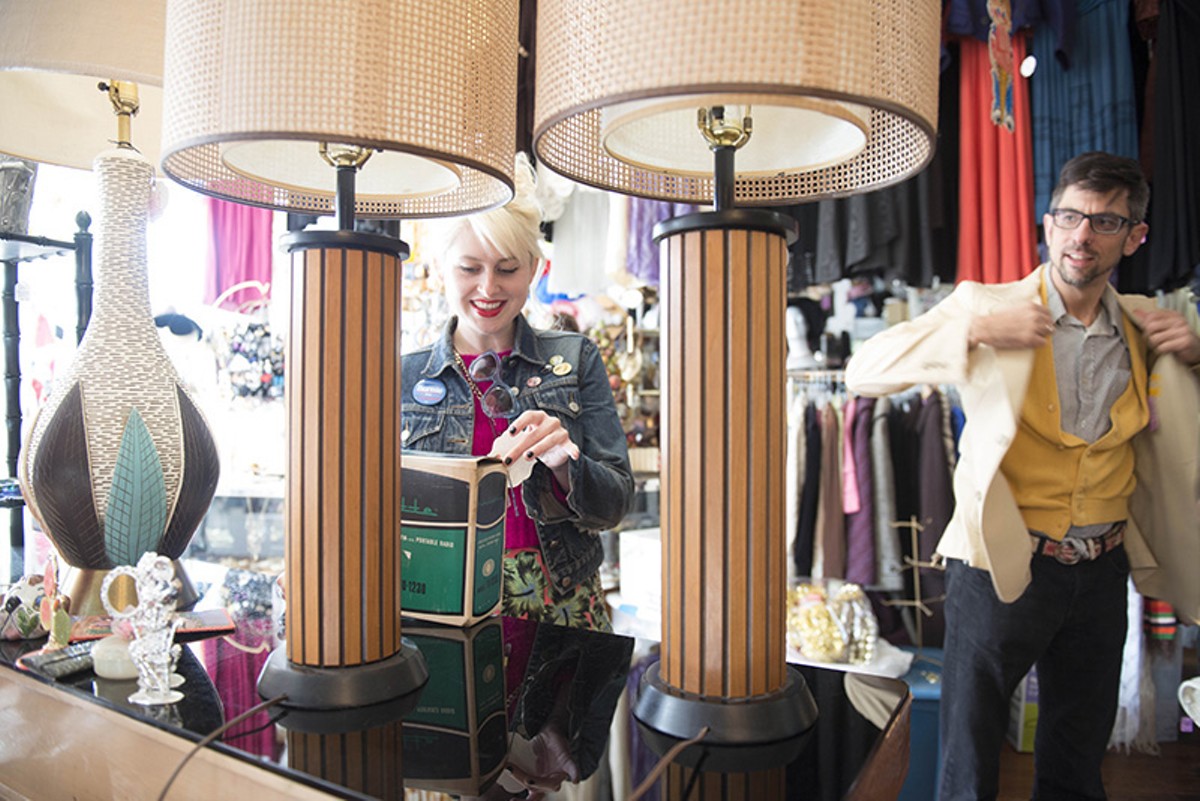 Paige Brubeck and Evan Sult see what's for sale. In addition to performing as Sleepy Kitty, they run Sleepy Kitty Arts, a freelance design and screenprinting project, and Sult is both publisher and editor in chief of the music publication Eleven. Corey Woodruff

We've been in the Cherokee Street neighborhood since 2008, ever since we first moved to St. Louis. We live and work here, and love that it has such a strange and varying collection of shops — it's a great place to get a lot of bang for your buck. A lot of the shops here are owned by people who are working where they live and investing in it, keeping their money on the street. And that's part of what allows the artistic community to keep going: It is a functioning neighborhood run largely by the artists who are making stuff. Which is awesome.

We set out at 2 p.m. on a Tuesday, starting at Retro 101 (2303 Cherokee Street, 314-762-9722). This is the spot we send anyone who is on Cherokee Street for any length of time, because it is one of the primo places in the city to find unique, inexpensive vintage stuff. They tend to have great men's suits and elaborate women's dresses, skirts and shirts — amazing vintage clothing from the late '30s to even the '70s. And downstairs has old toys, radios, lamps and cool housewares as well. We ended up with a '60s alarm clock to replace our terrible modern one. That cost all of $5.

We then moved to the Antique Row portion of the street and visited Panorama Folk Art (1925 Cherokee Street, 314-772-8007). They have art and antiques, but also a guy named Mark Sheppard, who has recently become a resident artist there and is putting out these great paintings. We didn't actually get anything on this trip, but I think we'll be back for a painting at some point soon.

Next we went across the street to South City Art Supply (1926 Cherokee Street, 314-884-8345), a new shop that we are excited about. They do a great job of using a pretty small footprint of a store to get an impressive array of art supplies, comic books and art publications. Evan bought a Magma sketchbook for $9.95; Paige got a mini notebook for $3, as well as a set of six Stabilo pens in various colors for $1 apiece. One thing we really like about this store is that it stays open until 10 p.m. on Thursday, Friday and Saturday, which seems ideal for an art store — after all, sometimes inspiration strikes late in the day.

Following that, we went to Malow Fashion (2613 Cherokee Street, 314-771-4606). The store has a wide variety of new clothing in varying styles, and every now and then we see something that looks awesome. On this trip, Paige bought a sweater for $10.

Then we went across the street to Guardian Angel (2700 Cherokee Street, 314-773-9027), which is a recently arrived resale store. Its presence is great because our street really suffered a loss when the Salvation Army left — to us, thrift stores are a crucial anchor to an actual art neighborhood. You need those low-cost materials. Guardian Angel provides really inexpensive clothes, and the money for that goes straight to a social-services program that is based in the same building. We didn't find anything on this trip, but it is still a great store with an important purpose.

Our last stop was Kismet (3409 Iowa Avenue, 314-696-8177). They have an amazing record selection. Paige ended up with Sylvia Vartan's 1961-1962, an early French rock & roll record, for $21. It even includes some Elvis songs in French. Evan got a double LP set called Library of Sound Grooves: Obscure Psychedelic Manuscripts from the Italian Cinema 1967-1975. By coincidence, they were actually playing the next volume of it in the store as we were shopping, and we were really digging the sound that was happening. He ended up going with it since it fit the moment so well. That was $25.

And then we were out of time! Cherokee Street has so many shops to visit it can be easy to lose yourself. We spent our remaining money on beers at Yaqui's (2728 Cherokee Street, 314-400-7712). But that's nothing new: We spend money every single day on Cherokee Street. You should, too! -- As told to Daniel Hill