VIA FRANK ANTHONY
Frank Anthony, once bullied for his Sketchers, is now a renowned sneaker artist.

Frank Anthony wore Sketchers in middle school. He didn’t care about the brand. He didn't care about the yellow paint scuffs covering the shoes. “I was just happy to be alive, running around, pretending to be a Ninja Turtle and Power Ranger,” Anthony says with a chuckle.

But the bullies at his East St. Louis middle school — they cared about his shoes. They teased him and teased him about his Sketchers, and they wouldn’t stop.

After enough teasing, his older brother, Carlos, came up with a solution: What if he gave Anthony an old pair of Jordan 1’s? The Jordans had cracks and creases in the leather, but they could fix up the shoes to wear at school.

Carlos was a sneakerhead, the kind of person who bought every new Jordan and cleaned them with a toothbrush and dishwashing liquid.

But the brothers went a step further with these Jordan 1’s. They didn’t just clean them. They repainted them blue and brought them back to life.

“We got the sneakers ... to look presentable,” Anthony says. “And after that, I started learning that I can also express myself on this.”

Throughout high school, Anthony kept tinkering with sneaker art. He got better and better. The bullying stopped. People started dapping him up for his stylish shoes and asking for their own pairs. “The whole world just turned in the opposite direction,” he says.

Now at the age of 26, the East St. Louis native is renowned around the world for his sneaker art. Quite literally, he buys sneakers and paints them. “Wearable artwork,” he calls it. He has created Air Force 1’s with Michelangelo’s Creation of Adam, Vans with the Pac-Man logo and Nikes with a redrawn Spider-Man-themed swoosh logo. He calls his artwork “happy and free.”

“Something that is fresh, it's modern, but clean as well,” he says.

Over the years, Anthony has painted sneakers featured in the viral rap music videos “BOP on Broadway (Hip Hop Musical)” by DaBaby and “Hot Shower” by Chance The Rapper. His work has appeared on Overtime’s “Battle of the Shoe Customizers” and on Insider, which garnered over 460,000 views.

This past summer, Anthony was invited to complete possibly his largest art project yet. Major League Baseball hired him to design a pair of cleats commemorating Jackie Robinson. The shoes, showcased during all-star weekend, honored the 75th anniversary of Robinson breaking the color barrier. 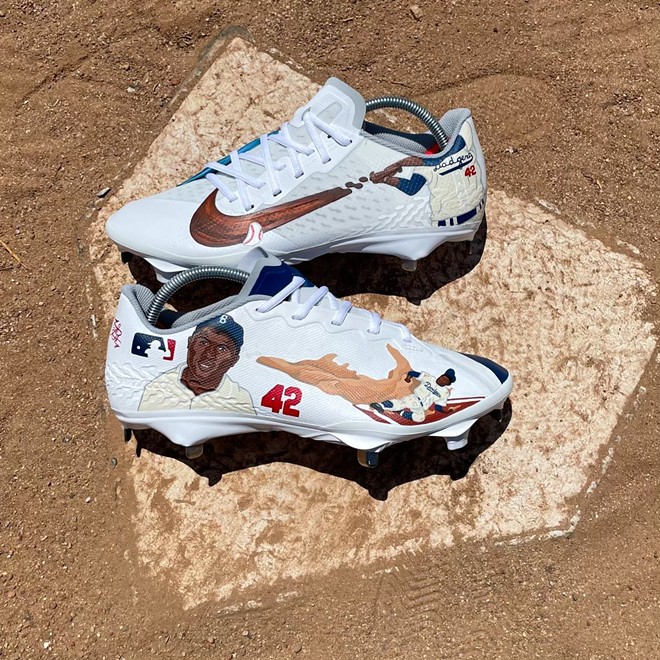 VIA FRANK ANTHONY
A look at the Jackie Robinson-themed cleats that Frank Anthony created for Major League Baseball.

Anthony doesn’t follow baseball. But he didn’t hesitate in accepting the offer.

He made the cleats in three sleepless nights — nights filled with highlights of Robinson, Kendrick Lamar songs and Stranger Things. He didn’t sketch it out first. He simply drew what came to him: action shots of Robinson stealing bases and his jersey number — 42 —which will never be worn by another player.

“The idea was just so vivid in my mind that I was able to sketch everything out after I had ideas,” he says.

The MLB invited Anthony to Los Angeles for the all-star weekend. There, he painted the shoes at a booth over three days. They were later auctioned off, with the proceeds going to the Boys and Girls Club of America.

Outside of a short stint at Jackson State, he stayed almost exclusively in East St. Louis. But since all-star weekend, Anthony has stayed in Los Angeles, trying to make inroads in the art community. Although he's getting used to the west coast, he still misses East St. Louis.

“It's been hard,” he says. “It's been really hard because the shift of leaving family and friends and having to create a new environment and space. It weighs a toll from time to time.”

He says he’s focused on expanding his art through new mediums. Now he creates artwork on all kinds of items — on sneakers, cleats, T-shirts, bucket hats, furniture and canvases. He wants to continue expanding, making artwork for designer brands, companies and campaigns.

But sneaker art, the art that stopped the bullies and catapulted him to fame — that’s not going anywhere.

“Sneakers,” Anthony says, “will always be the bread and butter.”