Faceless, Now at the Rep, Questions the Very Nature of Justice

Written by Selina Fillinger. Directed by BJ Jones. Presented by the Repertory Theatre St. Louis through February 4 at the Loretto-Hilton Center (130 Edgar Road; www.repstl.org). Tickets are $45 to $69.50.

Ah, the courtroom drama. It's a fine set-up to depict America struggling to discover the true nature of justice as the state attempts to punish one of its own for their crimes. Selina Fillinger's play Faceless, which is currently on stage at the Repertory Theatre St. Louis, offers an intriguing twist on the format: Rather than focus on matters of jurisprudence, she concentrates on the reactions of five principals to the crafting of "impartial justice" in a high-profile terrorism case. Such justice, she argues eloquently and surprisingly without cliche, is manufactured from a toxic stew of publicity, personal ambition and shutting oneself off from any emotion that comes too close to compassion or mercy. Faceless is an intelligent, empathetic and moving cry for applying more humanity when solving human conflicts.

Susie Glenn (Lindsay Stock) is an eighteen-year-old white girl from the suburbs who converted to Islam and joined ISIS online and was then captured by the authorities while trying to join her fiancé (whom she's never met face-to-face) in Syria. She's now facing twenty years in prison for aiding terrorists. Federal prosecutor Scott Bader (Michael James Reed) wants to use Claire Fathi (Susaan Jamshidi), a Muslim child of immigrants, as his hammer of justice in this career-making case, but Claire is adamantly against being his proxy to demonize Islam. When she sees Susie for the first time in court, though, Claire is enraged — what does "Muslim Barbie" know about the Quran? If Susie will soon represent Islam to Americans, Claire decides she has to counteract this sham with her own patriotism and lifelong peaceful practice of her religion. She takes the case on with a vengeance.

Fillinger twins the characters in scenes to compare and contrast their beliefs and reveal their flaws. Several times Claire and Susie are shown simultaneously praying, one in Arabic and one in English — only one gains strength from the ritual, while the other becomes shaken. As for Susie's father, Alan (Joe Dempsey) is a recent widower who can't comprehend his daughter's decisions. At a loss, he reads the Quran in hopes of understanding who she is now. His open-mindedness and willingness to meet her halfway only causes more friction between them and leaves them more estranged. Meanwhile, Mark Arenberg (Ross Lehman) is Susie's defense attorney, yet he regularly plays basketball with prosecutor Scott, an aggressive loudmouth. 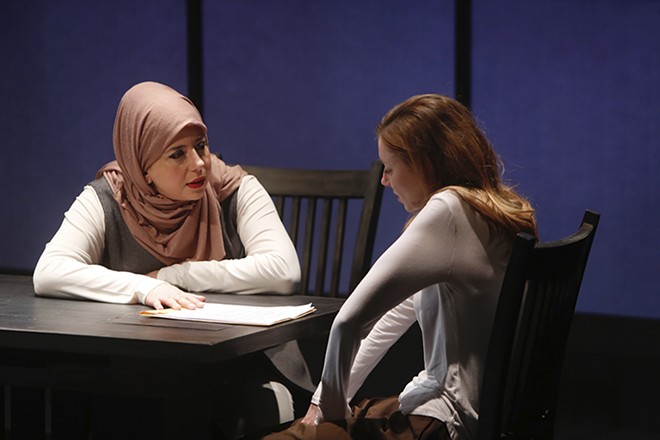 None of these characters is so hidebound that he or she deserves to be called a villain — except for the general public. The unknowable mass of angry Americans issues death threats to both Muslim women (sometimes in person), even as Mark and Scott (Jewish and American dream, respectively) escape notice.

The skill of each individual actor is subtly applied. None of the characters feels like a puppet here to voice a particular argument; they are complex people, whose lives outside the case start to affect them in strange ways. Scott fights his own stubborn ignorance to respect and understand Claire's faith; Mark's Judaism can encompass his passionate defense of a Muslim accused of terrorism. Claire's righteous anger meets its match in Alan's untethered rage at what his family has become, and both are startled to see their reflection in one another. As Claire works toward the absolute destruction of her foe — who, again, is a grieving, confused teenager — doubts nag at her. Even Susie grows less sure of her actions as the case drags on.

And as these developments affect them, compassion is born. Legal foes are seen as human beings, battered by a lifetime of difficult choices and misplaced pride. It's faith that redeems them in each other's eyes — and somehow, that matters more than justice.

The Best Things To Do in St. Louis During the Weekend, September 23 to September 25

Pumpkin Picking at Eckert's Is Basically the Best