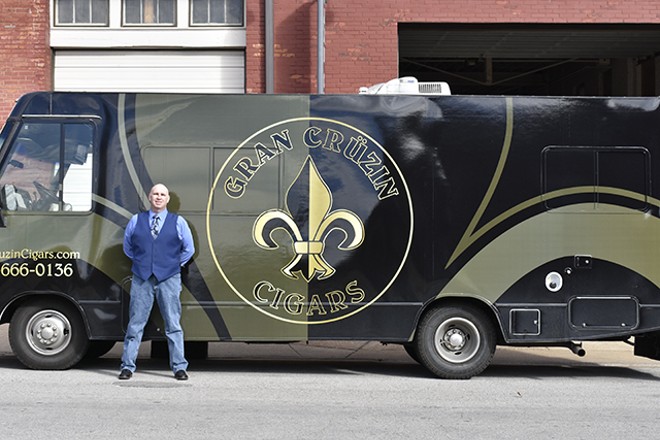 MEGAN ANTHONY
Tommy Clyne has put the cigar lounge experience on wheels.
Tommy Clyne, a local firefighter and employee at Gran Cru Cigars in Soulard, is bringing his passion for cigars to the St. Louis area in the form of an RV turned mobile cigar lounge. Gran Cruzin VIP Mobile Cigar Lounge will have its grand unveiling at this year’s Mardi Gras Parade in Soulard on February 10.

The idea for the mobile cigar lounge came to Clyne three years ago. “I was thinking to myself, ‘This is great. This is an idea that would work,’” he said after noticing the way food trucks, and even a clothing truck, have become popular in the region. “A mobile lounge that I could take places, set up and offer premium cigars.”

The main objective of the mobile cigar lounge is to bring the cigar experience to you. As the number of spaces around town that allow smoking dwindles, Clyne hopes to provide an “executive VIP lounge” for events by driving right up and parking outside the building.

The lounge comes with twelve seats and a small humidifier that will hold five to six different kinds of cigars of your choosing. In order to keep the air clean and guests from being overwhelmed by smoked, Clyne has outfitted the RV with a Rabbit Air purifier and a power vent system to pull out the smoke. 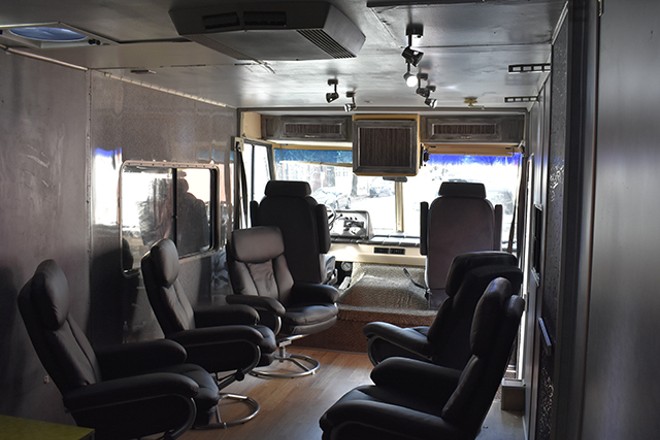 MEGAN ANTHONY
The interior is spare, but can be equipped with the cigars of your choice. An air purifier keeps things from stinking.
The overall interior of the RV is clean and simple. With metallic grey walls and black chairs encompassing filling most of the space, it’s nothing fancy — just a spot for friends looking to unwind or step away from the party. As Clyne promises, “You can come, enjoy a premium cigar, pipe or cigarette and still return to your party without really leaving the party.”

The cigars will come from Gran Cru Cigar shop where Clyne works. However, he says he is not opposed to people bringing their own. “I’m not going to tell someone they can’t come in and smoke because they have their own. Rock on; it’s a lounge!” Alcohol, too, must be provided by the individual as Clyne will not be serving drinks.

At its reveal during the Mardi Gras Parade, look for the Gran Cruzin VIP Mobile Cigar Lounge near the Gran Cru tent. The lounge will be available only for viewing on that day, however, it is already available for bookings and Clyne says you can even book it for use that night.