Fright Fest is Gearing Up to Scare St. Louis Once Again This Year 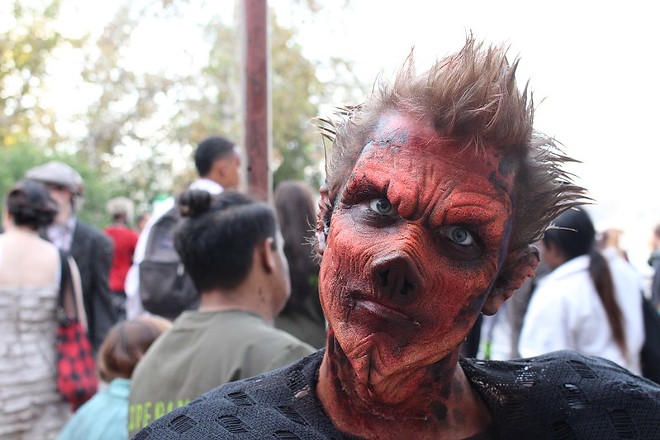 Inside the Magic / Flickr
It's the time of the year where we all pay to get scared at Six Flags.

For many in the St. Louis area, Fright Fest is a staple on their Halloween checklist. While last year saw Six Flags St. Louis (4900 Six Flags Road) introduce “Hallow Fest” as an alternative during the pandemic, this year has the return of the classic festival. Fright Fest kicks off on September 24 and runs Friday through Sunday until October 31.

Haunted houses and indoor shows are making a comeback to Fright Frest. New this year is the Creatures of the Corn maze, filled with “dark corners, misleading paths, dead ends” and creatures waiting in the depths, according to a press release. Three other mazes and haunted houses are available for guests to explore, as well.

Seven separate scare zones are also at the theme park, ranging from Spider Alley to the Blood Bank Lounge. You can even visit Zombieville if you’re feeling apocalyptic.

The fest also has family-friendly experiences for the littles who aren’t quite into jump scares yet. Three separate mazes offer adventures for young park-goers who can receive treats and tales as they travel the paths. Kiddos under twelve can wear costumes but face paint and costume masks are not allowed.

“We are excited to be bringing back Fright Fest after a one year hiatus. The fear is calling and we are answering with some new scare experiences as well as adding more family-friendly activities to the mix,” Six Flags St. Louis President Phil Liggett said in a press release. “This is by far the most popular event we do at the park and we know that our guests are as anxious as we are to get their scream on.”

The Rocky Horror Picture Show will also be played on October 15 and 22 with shadow cast Flustered Mustard performing alongside the film. Since the film is rated R, the movie is limited to those seventeen and older unless you have a parent or guardian with you. Wristbands are required for entry to the show and can be picked up at Palace Theatre at 7 p.m., and the movie starts at 11:30 p.m.

Food and beverage offerings are appropriately frightening and delicious. Two new items will pop up on the menu: There’s the Frightening Fanta Fizz drink, served in a limited-edition souvenir cup and made with Fanta Orange, candy corn syrup, sprinkles, and whipped cream. Meanwhile, the Funnel Scream Cake featuring Snickers is also available for a limited time.

Tickets start at $34.99. For times and tickets, visit sixflags.com.