Georama is a musical biography about the mostly-forgotten American artist John Banvard. It's also a biographical musical about pretty much everyone who makes art in a capitalist society, and a love letter to the joy that comes from making something that is true. Somehow, Georama manages to be both of those things without coming across as heavy-handed or dull — far from it. The creative team of West Hyler, Matt Schatz and Jack Herrick has written a musical about an uncommon man for the common man, and it is spectacular. Under Hyler's direction, the world premiere of Georama is a funny, insightful and ultimately inspiring musical about why art matters. Even if you're fool enough to think it doesn't, Georama will win you over.

P.J. Griffith is John Banvard, a charismatic and handsome young man who hangs around the St. Louis riverfront in the mid-1800s, drawing what he sees. We meet him when he attempts to help Taylor (Randy Blair) reclaim his job aboard one of William Chapman's showboats. Blair plays Taylor as a sly carnival barker looking for a mark, all nudges and winks to the audience.

Their plan is for John to paint the scenery for Taylor's dramatic recitations of riverboat calamities and other thrilling yarns. A near-strangling on a piece of machinery gives John the idea of painting all of his scenery on one massive piece of canvas that can be continuously unrolled on a pair of crank-operated spindles, an invention Taylor dubs the "georama." When Taylor takes all the credit for the device, John dissolves their partnership and takes a keel boat down the Mississippi, painting as he goes.

Griffith's John is an earnest and easygoing man, content to drift downriver and practice his craft with no thoughts or concerns for what comes next. His world opens up with he meets Elizabeth (Jillian Louis), a pastor's daughter who also composes music. She thinks his stories about the river would be better received with a score, while he thinks his boat will be cozier with a pretty girl aboard. Liz and John leave the small town with Dad's warning — "Art is a thing for people who have money and time to burn!" — ringing in their ears.

That warning is quickly forgotten when the pair sing "Your Dad Was Wrong," a song about taking the leap to follow your artistic dreams, starvation be damned. Louis possesses one of those rare voices that fills you up with its beauty, and she and Griffith sound marvelous together against the musical backdrop of Jacob Yates' plucked and strummed cello. (Yates and fellow musician Emily Mikesell perform all of the early-American music on cello and piano, and Yates in particular impresses with his ability to conjure unusual sounds out of his instrument.) 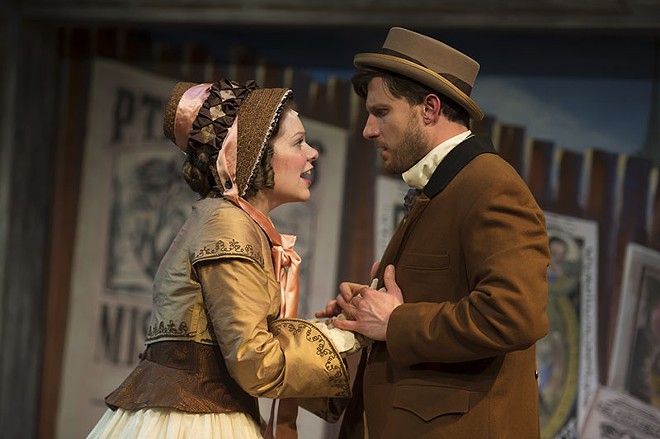 Eventually Banvard has created a 3,000-foot-long painting of the Mississippi River. In an era before photography and rapid transit, his georama is a crowd-pleasing wonder. You get a taste of how entertaining it can be thanks to the 600-foot-long scrolling backdrop created by the artists of the Paint Space, who worked from scenic designer Scott C. Neale's original concept paintings. (They did an excellent job with it; I lost myself in the painting more than once.) John and Liz become wealthy and famous for their public exhibitions, get married and live happily ever after.

Except they don't. While the georama was created as a piece of pure art that represents John and Liz's love for the river, multiple copycats pop up with the same idea and glut the market thanks to John's old "friend," Taylor. Pride keeps John from just retiring, and there comes a time when John Banvard is a defeated man, in every sense of the word. The canvas goes blank behind John as he shouts "Art Is a Lie," alone and lost in the ruin of his former triumphs. It is a terrifying depiction of life without hope or inspiration — of life without art. Despite being a pioneering American artist, Banvard ends up forgotten, his georama broken into pieces and disappeared into the past.

But because Georama is a work of art, John and Liz get a last chance at happiness that they didn't get in real life. "Beauty is truth, truth beauty," as the poem goes. A show celebrating John Banvard's life is on stage, and a painting inspired by his life's work is right there with him. Art really will best crass commercialism in the long run.