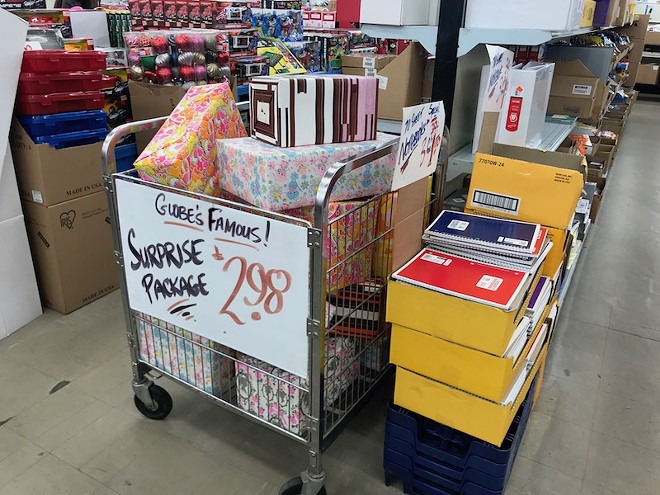 DUSTIN STEINHOFF
At Globe Drugs, treasures are lurking behind that bright wrapping paper.
If you're looking for stocking stuffers, White Elephant gifts or just really bizarre conversation starters, you could do worse than visiting the sole remaining outpost of St. Louis drugstore chain Globe Drugs (1900 South Broadway, 314-241-0967), which does a brisk business selling "Surprise Packages" that contain items ranging from wax vampire teeth to large adult jock straps and definitely everything in between. The only catch? You have no idea of what you've bought until after you've made the purchase.

Globe Drugs has been in business for 79 years and once had four stores, but today only the Soulard shop has remained. Its "Surprise Packages" cost $2.98 . Located at the end of an aisle in the middle of the store, a dozen or so of these sealed, gift-wrapped boxes fill a metal cart labeled “Globe’s Famous! Surprise Package.”

The packages are so popular that when we visited last week, a cashier warned us that if we wanted a large quanitity, we had to order in advance. And no, that's not just a hypothetical; last year, he said, they got an order for 250 boxes. While filling the order, the drug store's backroom resembled Santa’s workshop with employees spending almost a week wrapping the huge order of packages.

There's good reason they're in high demand. “You know, in every 1,000 boxes, there’s a Rolex watch,” the cashier joked.

OK, so maybe not. But there is treasure to be found here, so long as you're willing to spend $3 and don't mind a little randomness. 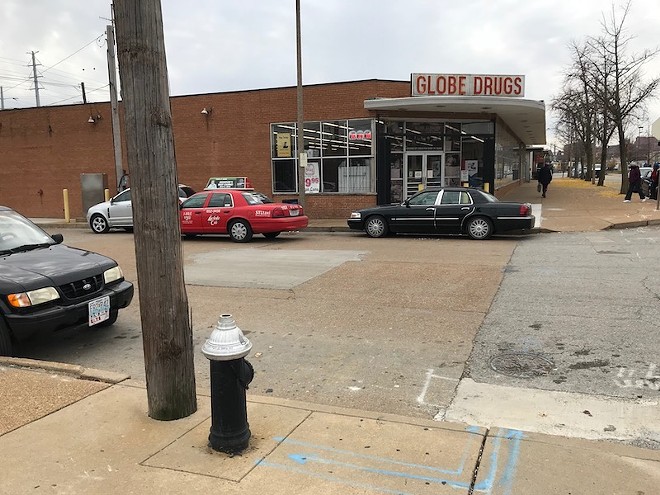 DUSTIN STEINHOFF
Globe Drugs is a one-of-a-kind kind of place.

If there’s one thing loyal Globe Drugs customer Marie Ceselski doesn’t mind, it’s a little randomness. Ceselski has been purchasing “Surprise Packages” for approximately fifteen years. She estimates she has bought more than 50 of the boxes over the years — nine this year alone. “It’s the most glorious crap you could ever get,” Ceselski says.

Over the years, Ceselski has made more memories than she can count from these packages. A Democratic Party committeewoman who hosts monthly "Drinking Liberally" happy hours, Ceselski recalls a particularly wonderful instance where she gave a guest speaker a “Surprise Package” as a gift to open in front of a crowd of over 60 people. The prominent author made short work of the box, sifting through the contents quickly before pausing for a moment and lifting her arm in the air to triumphantly show off her prize to the crowd: a male jock strap.

We acquired a Surprise Package of our own last week and found that underneath the striped gift wrap was a cardboard box that had originally contained a dozen four-ounce bags of Hershey’s Snack Mix. Inside the cardboard Hershey’s box was another box, this one black-and-white with a sticker that said “Color Me!” stuck on top. It was covered in colorless outlines of patriotic symbols such as an eagle, a portrait of Uncle Sam, the Statue of Liberty and a small Betsy Ross flag with its thirteen stars. Inside were the words to the national anthem, printed on the inside lid. 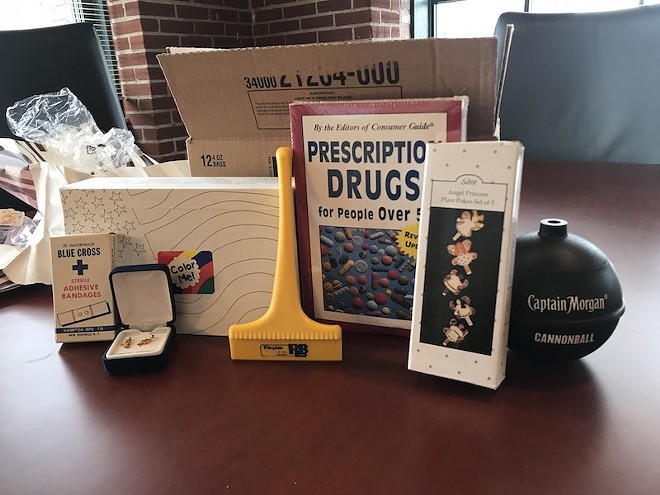 It only got more bizarre from there. Another box, a small velvet jewelry box, contained two golden (colored) earrings that looked like birds at first glance, but appear to be saddles upon further inspection. There was also a black plastic ball with a hole at the top, resembling a large fishing bobber printed with the words “Captain Morgan Cannonball"; a box set of five "angel princess plant pokers," whose manufacturing quality lands somewhere between homemade and professionally made, but leaning more towards the former; a pack of ten waterproof bandaids and a small yellow ice scraper that seemed to be a promotional item for a company with the abbreviation PLB, but the logo has faded too much to tell.

Last but not least, the bottom of the box held a hefty 608-page book, Prescription Drugs for People Over 50. The book, for those old enough to read it, contains information on all sorts of medications, from Advil to Zantac.

And if that seems like a bizarre haul, it's arguably better than the box an RFT staffer was gifted recently in anticipation of her new baby. That one contained a mask, an XXL Bennigan's T-shirt, a plastic arrow magnet inscribed "(Amateur) Gynecologist" and, yes, another jock strap.

After years of amassing “Surprise Packages,” Ceselski knows a thing or two about the items hidden inside. She suggests not buying all of them at the exact same time if you don’t want several your friends at the same party to receive a couple of similar items, as some boxes packaged at around the same time may naturally have repeat items.

To Ceselski, the value of the items in “Surprise Packages” lies not in how much money they’re worth, but in the priceless reactions of opening a box filled with items so random you couldn’t replicate on your own if you tried.

“The person who has everything doesn’t have what’s in this box,” Ceselski says.