Hands on a Hardbody: Truck contest makes for quirky but bumpy musical with New Line Theatre 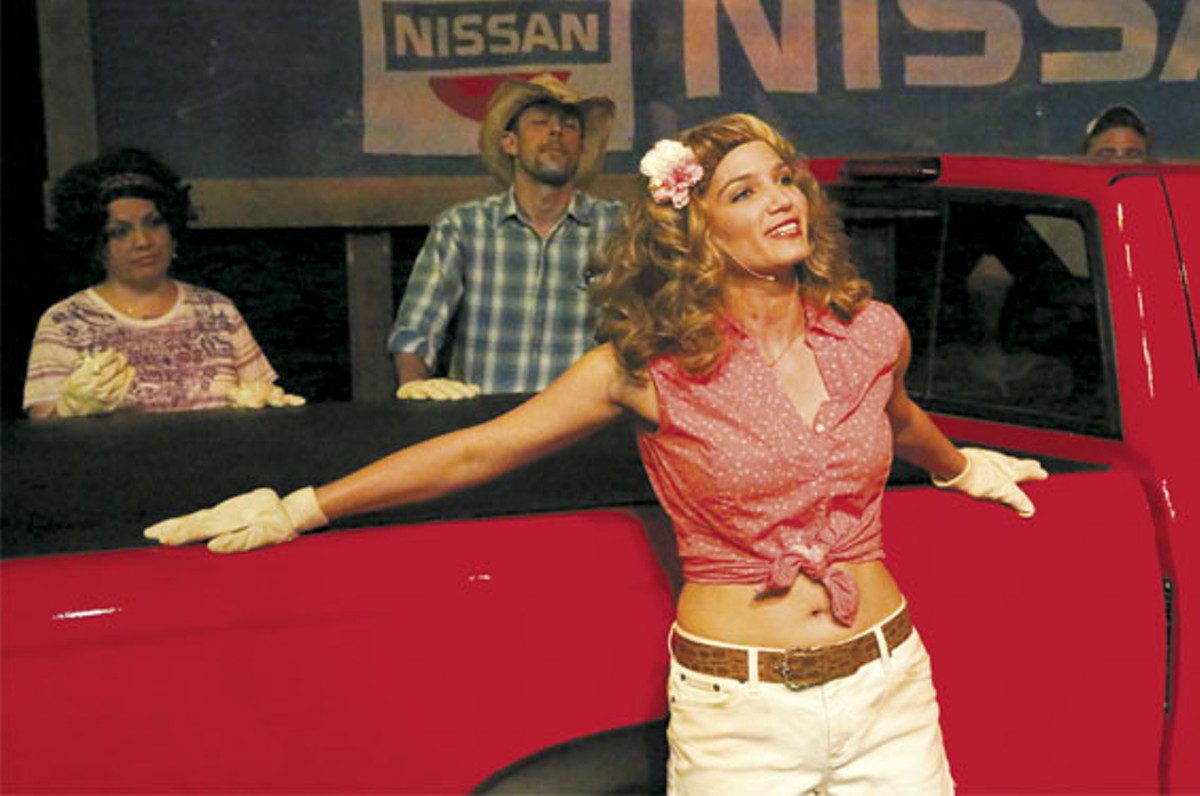 In New Line Theatre's latest, Taylor Pietz as Heather Stovall sings "If I Had This Truck." In the background are Anna Skidis as Norma Valverde and Todd Schaefer as JD Drew. Jill Ritter Lindberg

Hands on a Hardbody: Truck contest makes for quirky but bumpy musical with New Line Theatre

Fresh off its recent success with Rent, New Line Theatre closes its season with a very different tale of mid-'90s American angst, staging Doug Wright's adaptation of S.R. Bindler's 1997 documentary, Hands on a Hardbody, which chronicles a days-long contest where ten participants try to outlast one another in the hot Texas sun, competing to win a Nissan truck as the last one standing with a hand on the "hardbody."

As a microcosm of the American Dream deferred, Hands on a Hardbody is a natural, as the hard-luck stories of working-class folks unfold around the cherry-red pickup truck. As a musical, however, this uneven show is anything but typical. We know from the beginning, for example, that all but one of the contestants is going home empty-handed, giving the show a somewhat formulaic feel of Survivor. What's more, the show's central conceit — these people are bound to a truck! — precludes the sort of big, splashy song and dance numbers typical of so many musicals.

Rather, Hands on a Hardbody concentrates on the quiet struggles of normal folks — working-class stereotypes for whom the truck is not some easy luxury, but rather a chance at a leg up in an economic race that seems fixed. "American Dream, Japanese car," quips JD Drew (a soulful Todd Schaefer), the middle-aged rig worker who lost his job and is still recovering after a workplace injury. He's joined around truck by Jesus Peña (Reynaldo Arceno), a Texas-born Latino who's tired of people not regarding him as a "real" American and who plans to sell the truck to help pay for school. The devout Norma Valverde (a mellifluous Anna Skidis), on the other hand, would use the truck to ferry her family about town, while war vet Luke Steingruby (a brooding Chris Alvaro) hopes to impress his young family, and Ronald McCowan (a terrific Marshall Jennings) believes his Snickers-heavy diet will deliver him the keys. The only character who doesn't seem to need the truck is Benny Perkins (Jeffrey M. Wright), a scheming competitor who won a similar contest a few years back.

With lyrics by Amanda Green and music by Trey Anastasio of Phish fame, Hands on a Hardbody boasts some terrific songs. Skidis, who has one of the show's biggest voices, leads the cast through a rousing "Joy of the Lord," perhaps the show's most energetic number. Steingruby brings real pathos to "Stronger," and Jennings delivers a terrific rendition of "My Problem Right There."

One week into the run, however, and several performers' voices were beginning to show strain, with Wright, in one of the show's biggest roles, sounding gravelly, and other performers lacking the vocal range to bring a song home. Directed by Scott Miller and Mike Dowdy (who also plays scheming car salesman Mike Ferris), the show has good pacing, but there's no way around it: That shiny red truck — the show's central prop, parked center stage — is a beast for blocking. Most of the cast spends much of the show in a ring around the Nissan, meaning there are often as many as three actors with their backs to the audience, often obscuring one's view to the singers. What's more, many of the numbers are sung by just one or two performers (who at times have their backs to the audience as well), leaving the rest of the cast to stand idly by and lending the show a static quality.

Still, there are plenty of bright spots to this quirky show, which, judging from the standing ovation it received Friday night, succeeds on the passion of its cast and singularity of its execution. 