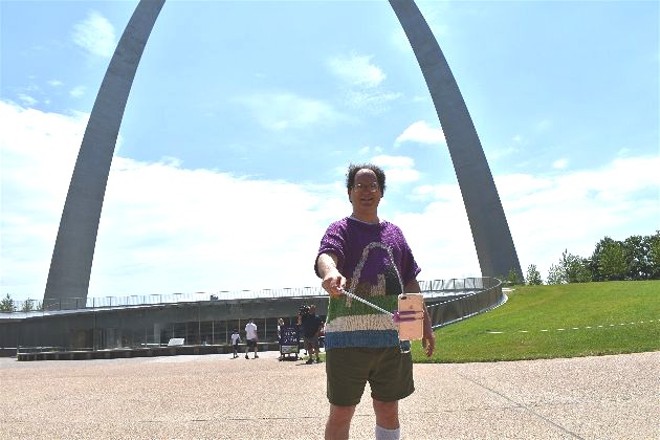 DANIEL HILL
It's a sunny Wednesday afternoon on the Arch grounds, and Sam Barsky is a man of singular focus as he searches for a suitable spot to shoot a selfie in his newly completed Arch sweater.

The "artistic knitter," as he is known, traipses across a field with a clutch of reporters in tow, trying to find the best possible angle to get his shot. When he is finally satisfied, he holds a selfie stick in front of himself and grins as he snaps a pic. And with that, the Arch joins such landmarks as Times Square, the Golden Gate Bridge, Tower Bridge in London, Stonehenge and the Eiffel Tower in the artistic knitting history books.

But Barsky isn't finished just yet. His sweater, which he spent a month knitting just for this occasion, also has the Old Courthouse depicted on its backside. Barsky turns the sweater around on his body so that the building is now on the front, and poses for pictures with the capitol in the background. 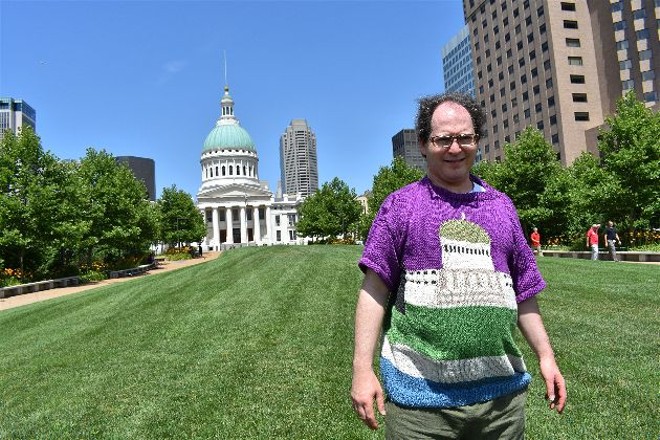 As we reported a few weeks back, this is his thing — knitting landmarks from cities around the world onto sweaters, then visiting those landmarks and taking selfies while clad in his completed work. This quirky hobby has grown into a full-blown career for the 43-year-old Barsky, who has nearly 50,000 followers on Facebook and who has been the subject of coverage by news outlets ranging from the New York Times to the BBC to the Washington Post to his hometown paper, the Baltimore Sun.

After he is satisfied with his shots, and the media scrum is done interviewing him, Barsky is led inside by workers and representatives from the Gateway Arch Park Foundation, where he gets a private tour of the new museum beneath the monument, which doesn't even open to the public until July 3 (being an internet star has its perks).

Inside the museum is a whole exhibit on the construction of the Arch, including a small-scale model that was used when the monument was built. Naturally, Barsky shoots a selfie in front of that as well.

Barsky's trip to St. Louis comes via Oh So Vivant, Das Bevo and Earthbound Beer, which are throwing a party where the public can meet the artist in the flesh at Das Bevo (4749 Gravois Avenue, 314-832-2251). It's going down Thursday, June 21, from 6 to 10 p.m. There will be a photo booth where you can get a picture with Barsky, a "tap takeover" by Earthbound and music courtesy of Larry Haller and the Good Times Band. (Check out the Kickstarter campaign for the trip for more goodies, including T-shirts and stickers.)

If you start now, maybe you can knit Barsky's face onto a sweater to wear in a selfie when you meet the guy. Just spitballing!