Here's the Story Behind That Vintage Hot Pink Sofa Everyone in St. Louis Wanted 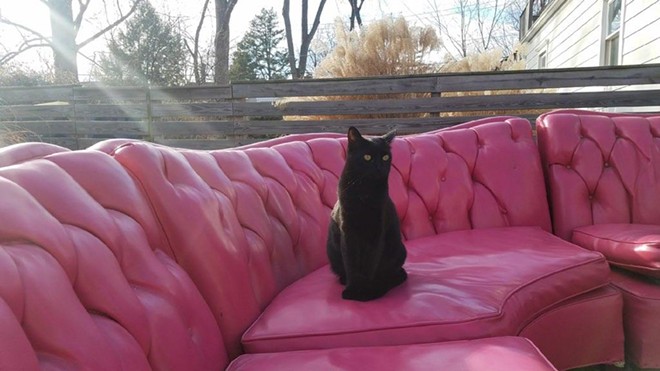 Claude Denis, who owns the St. Louis Hills vintage store The Future Antiques (6514 Chippewa, 314-865-1552), posted photos on Facebook on January 25 of his staff's newest acquisition: what he calls a "Pepto pink" sectional sofa. Made of solid wood with tufted cushions covered in bright bubblegum-colored vinyl, the eye-catching but slightly flawed '50s piece was a steal at $299.

"Fortunately for the people in the Midwest, they're in the area where mid-century modern is the most affordable," Denis says. "Get into New York, Chicago, L.A. or any of those high-end markets, and things cost a lot more money than what we charge. For that sofa in New York, put another $1,000 on it, if not more."

But was St. Louis ready for a statement piece that bold? As the Facebook post quickly demonstrated, the answer is "absolutely." People in the Gateway City and beyond were mesmerized by the colorful couch, with hundreds of the store's fans tagging friends to the post and commenting "OMG I need this." 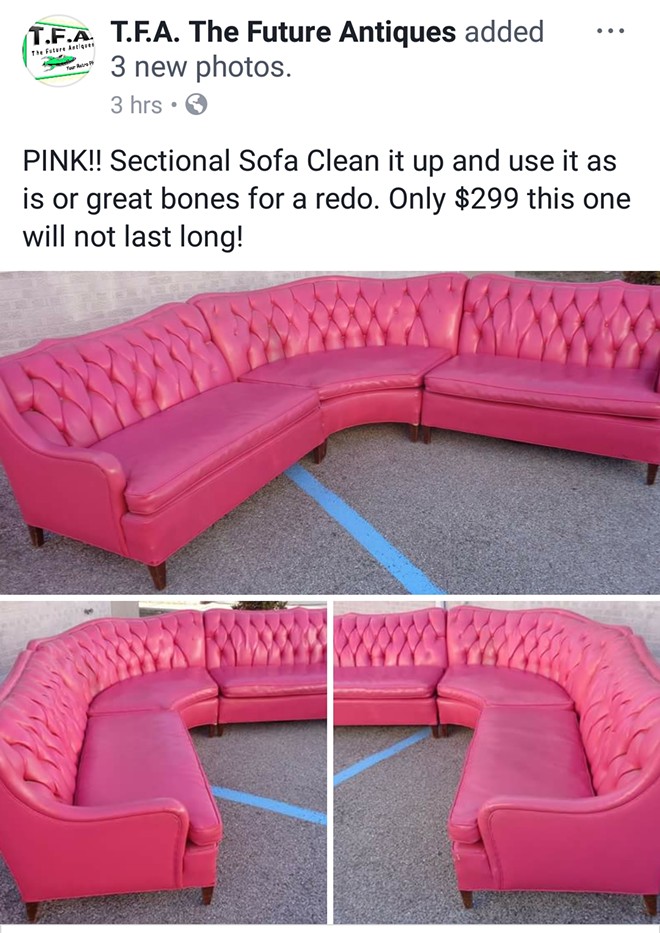 Denis tells the Riverfront Times that his Facebook posts typically have a "reach" of several hundred (including views, likes, shares and comments), but the sofa post — comprised of three photos showing off the three-piece sectional from different angles — racked up 23,000 hits in just 24 hours and is still going strong more than a week later.

"We couldn't have planned for that kind of exposure. That's just crazy," Denis marvels. "We knew it was cool, but it was going to take that special person to decide to live with a Pepto pink sofa."

But the glorious bright pink color is exactly what caught Sarah Rodhouse's eye. After talking with her boyfriend about how to build their decor around the sofa once they combine households, the Dutchtown resident headed to The Future Antiques the next day before the store opened, hoping to beat other buyers to the punch.

"One of the guys was coming out of the building and I said, 'I'm really sorry to bother you early, but I'm just chomping at the bit to buy that sofa,'" Rodhouse recalls. "I felt like I won the lottery! I hit the jackpot!

"And right after I paid for it, there was a younger gentleman who came in asking about it," Rodhouse continues. "We chit-chatted a little bit, and I felt kind of guilty. I was like, 'I'm really sorry! You missed it by two minutes!'"

Rodhouse now is considering whether to reupholster the piece; though the decades-old sofa is made of durable wood and the three pieces have held up well, the vinyl has a number of rips and is missing a few buttons. It's certainly is functional today, but she's thinking about covering it with new vinyl in a similar pink or another vibrant color.

"You can put the elbow grease into it and really clean it up, but I'm also getting quotes on what it would cost to have it reupholstered," Rodhouse says. "I'd still try to keep it as authentic as possible and even make it pinker, if that's possible. It commands a lot of attention."

For now, the sofa is safely stored in the Webster Groves garage of Rodhouse's boyfriend until the couple figures out what's next. But no matter what, the sectional will have a sister vintage sofa in a similarly unforgettable hue and size.

And there's one more thing that serves as a memorable footnote to the now-famous sofa's story: it once belonged to a funeral parlor. Denis says that The Future Antiques — a frequent winner for "Best Vintage Store" in the RFT's annual "Best of St. Louis" awards — acquired the sectional from the estate of a man who had owned it for many years, and the sofa had snazzed up an undertaker's establishment years before that. Denis shared the history with Rodhouse when she visited the store, and she tells RFT that it made her even more enchanted with her haul.

"I was like, 'Oh my god, I want that sofa that much more,'" she says. "That must have been the happiest funeral home in the world!"