How St. Louis' Repertory Theatre Bounced Back From COVID-19 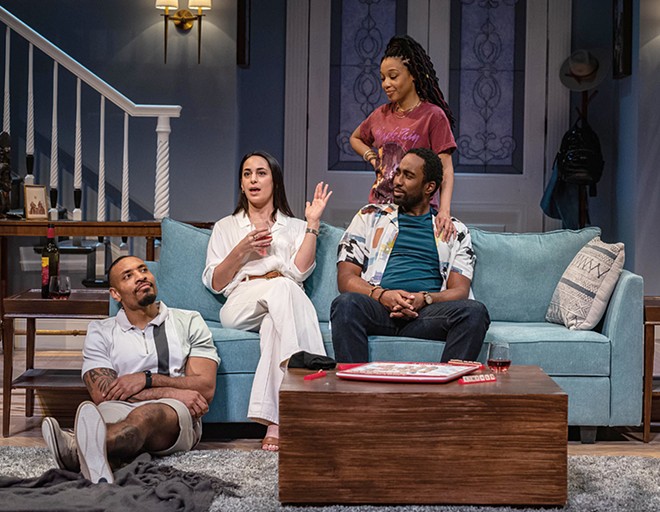 The Repertory Theatre of St. Louis was in a flurry of preparation in March 2020. Hana Sharif, the artistic director, and her cast and crew were in the midst of staging the world premiere of the musical Dreaming Zenzile.

But the COVID-19 pandemic soon put preparations on hold.

In the early days of the lockdown, the entire Rep team focused deeply on the people. Some of Dreaming Zenzile's crew hailed from other states or other countries. With the virus rapidly limiting travel, decisions needed to be made fast. Sharif, then-Managing Director Mark Bernstein and the Rep's board of directors decided the show would close and the cast would be sent home to wait out the oncoming storm.

Sharif and her team went back with a "big request." They asked the board to pay out the contracts of the Rep's full-time seasonal artists, which included the guest artists, actors and designers — anyone depending on the income from the canceled shows.

As the pandemic progressed into the summer, the George Floyd protests inspired more changes in the theater.

The board and staff worked to make the Rep a more equitable workplace and realign the organization's stated values to honor intersectionality. Sharif believes those changes make the Rep a more welcome place, and they are helping inform decisions about shows and reopening in the middle of an ever-changing pandemic.

"We're also figuring out how to make sure that the Rep, as we reopen, is throwing our doors and our welcome mat out to as many St. Louisans as possible," Sharif says. "We're one of the largest theaters in the state. We have a responsibility to have something for everyone."

As far as reopening goes, Sharif feels really proud of the way the organization pivoted to virtual multimedia experiences before reopening in 2021 with safety practices such as masking, testing and limited-capacity audiences. Sharif and her crew looked coast to coast at theaters for best practices and kept in touch with medical advisers to ensure audience safety.

"The audiences who came in May of 2021 were so grateful to be able to come, because the reality of being stuck at home and the way that our whole world had changed was daunting," Sharif says. "And there were people who were like, 'We just want to connect to the art. We just want to have something that feels normal for us and feels like joy.'"

Shows were moving as normally as they could when COVID-19 mutated, and the delta variant surged. The Rep was staging A Christmas Carol, but toward the end of its run, the stage manager fell ill. It looked like it would be curtains. But staff from all departments stepped in. Sharif checked vaccine cards, the managing director took tickets and a new stage manager learned the show. Only one performance ended up being canceled.

"It was the real test of the organization," Sharif says. "I had never been prouder to lead an organization than I was watching our teams rally together to make sure that we would make it through."

Even with the shifting nature of the pandemic and the slow return of audiences, Sharif has faith in the Rep and its resilience. She knows subscribers are being more cautious, selecting a few shows rather than subscribing to a whole season. The Rep is looking at its subscriber model and how audience members choose where they're going, and it offered a streaming version for certain subscribers.

Sharif is looking at ways to make the Rep's model even more flexible and adaptive to its audience. In the meantime, Sharif teases a great season ahead for 2022-2023, with House of Joy in late August and Agatha Christie's Murder on the Orient Express.

Sharif knows the Rep is not alone in a slow return to the stage. Theaters across the nation are experiencing it together just as they watched Broadway go dark for the first time ever together.

The future will bring more scenario planning, Sharif says, and daily challenges for her staff. But she's incredibly optimistic.