In Dying Chesterfield Mall, The Neutral Zone Arcade Plays on 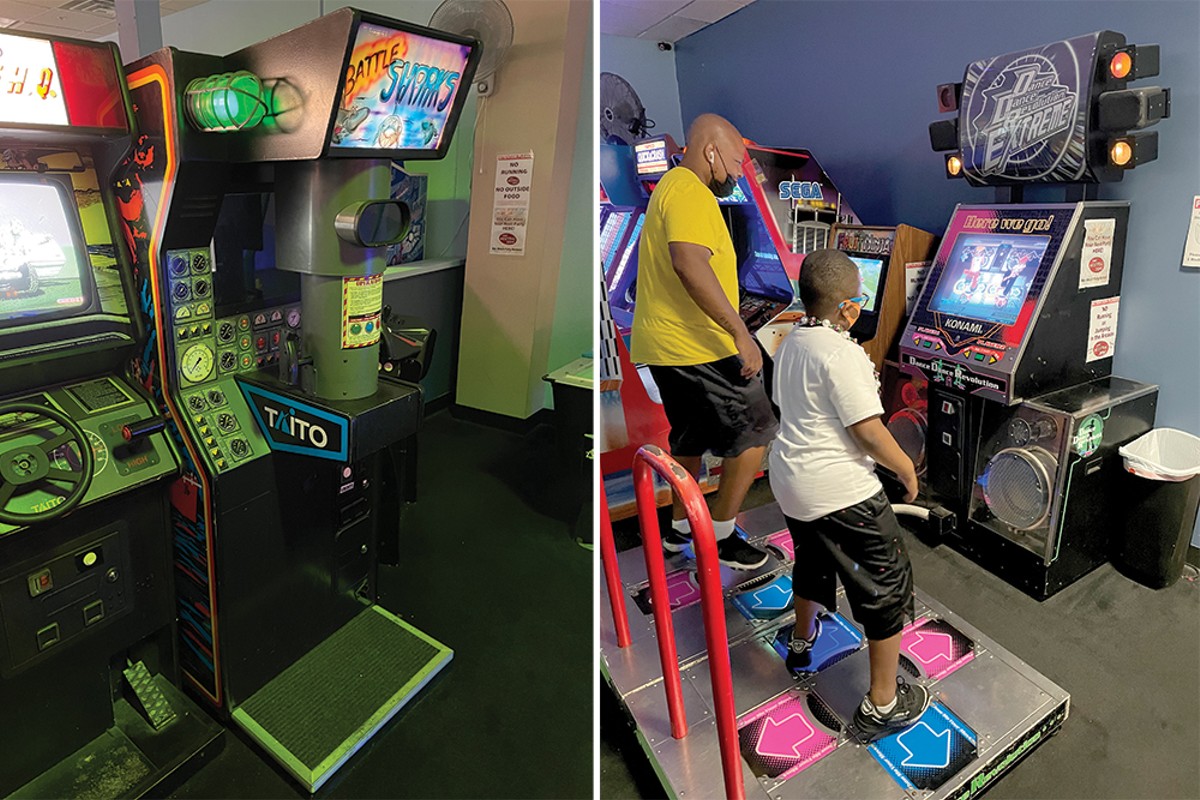 The gaming goes on and on at the Neutral Zone. JACK PROBST

Chesterfield Mall is a ghost town these days. The food court is entirely empty, save for the tables and chairs that remain in place. Most storefronts have their metal gates pulled down for good. The carousel that used to be the centerpiece of the building is gone. Once thriving, the mall is now all but deserted. It's an eerie sight.

Nevertheless, one corner of the mall has kept its head above the water throughout the pandemic and the ongoing internet-fueled decimation of brick-and-mortar storefronts. On the eastern side of the building sits an AMC theater, a two-story V-Stock (a retail store filled with physical media, comics and action figures galore), a standard Cheesecake Factory and, most importantly for our purposes, a heavenly place called the Neutral Zone (291 Chesterfield Center, 314-301-8697).

Since moving from south St. Louis County to Chesterfield Mall seven years ago, the Neutral Zone has provided an atmosphere perfect for both the casual gamer and the obsessive arcade lover. The throwback business houses over 80 arcade cabinets, pinball machines and even a couple of skee-ball games. It's a truly wild selection to see in one place, with a literal timeline of arcade games that surrounds you when you enter. And unlike the golden days of arcades, you don't need to worry about bringing pockets full of quarters, and there's no change machine spitting out jingling coins. Instead, the Neutral Zone charges a flat fee for unlimited arcade time (though the exact dollar amount can change from day to day, so it's good to call ahead).

In the '80s, you couldn't walk through a mall without passing an arcade. The sounds of Pac-Man chomping away at flashing blue ghosts and Donkey Kong stomping on his tower melded together with beeps and boops of dozens of other games. Kids of all ages would surround machines, pumping quarter after quarter into games like Galaga or Joust, trying to top the high score. Video games were taking over the lives of players everywhere.

In the '90s, you could play The Simpsons or Ninja Turtles beat 'em ups with three of your friends. Fighting games like Street Fighter II were kings of the arcade. You could hear the ominous voice of the announcer yelling "FINISH HIM" in Mortal Kombat all over America. The graphics got better, some of the games got more graphic, but there were still plenty of spots where folks could waste their time shaking a control stick.

By the 2000s, it was rare to see arcades in malls. Home gaming consoles from Nintendo, Sony and Microsoft killed the arcade star, but the passionate video game lovers — like the ones that run Neutral Zone — would give arcades a 1-Up, bringing enthusiastic fans of classic games back to their glory days.

While they do have a couple of cabinets running emulators of retro games, almost every game in Neutral Zone's collection is original. Some of the essentials might get upgraded — like CRT monitors that have passed on and are no longer manufactured anywhere, or cabinets with wood that hasn't stood the test of time — but they're all treated with love, and it shows. They replace the parts they must so that patrons can enjoy the memories of youth without fail, and they preserve the things that make these cabinets special.

You can tell the original Space Invaders cabinet saw some shit in the '80s by the cigarette burns that permanently melted little bumpy circles into the control panel. It's a detail you would miss if you don't have manager Tom Miller showing you around.

"You gotta have years of technical knowledge to work here and to fix this," Miller jokes while he gives the side of a cabinet a whack to wake up a game with a blank screen. "That Fonzie magic works. You won't believe it, but it does."

Miller, whose favorite game is Tron, has a head full of knowledge when it comes to the games under his care. Point to a cabinet and he might tell you an anecdote that happened in the Zone, or tell you which games in their arcade library have all their original components. He even knows his fair share of arcade "easter eggs." (Play 250 levels of Mortal Kombat 2, for example, and the game will turn into Pong.)

The Neutral Zone is so special, in fact, that it's become a destination for diehard arcade fans around the country. Miller has seen folks drive miles just to play their Dance Dance Revolution machine, a favorite among rhythm game enthusiasts and people that like to look silly in public. Romance is something you might be surprised to see in the arcade, other than the love between Pac-Man and Ms. Pac-Man, but a couple once got engaged in front of the game they played together on their first date. On an average day, parents come to get lost in the screens of their youth while they hold up their little ones to try them out, making video game memories of their own.

Then you have the regular customers who frequently visit to support the local business and indulge in their button-smashing habit.

"I have a couple of customers that come in almost once a month. They've been coming here for years," says Miller. "They play Junior Pac-Man and compete against each other, and they bet who pays for the next time they come in. So they'll be on this thing for like two or three hours. They probably have all the high scores on it."

If you want a piece of the arcade at home, the Neutral Zone can help with that as well, with some custom-built arcade cabinets for sale that are loaded with hundreds of classic games from every decade. The arcade also sells new and used collectible toys, from Funko Pops to GI Joe to Transformers to Star Wars figures. If you played with it when you were a kid, there's a good chance they have it for your collection. In sum, the Neutral Zone revives that sense of wonder from your youth and reminds you of a time when all you needed was a few quarters to have fun.

"We sell nostalgia," Miller says. "It's a powerful thing. I sell your childhood back to you."

[Editor's note: An earlier version of this story identified the manager of the Neutral Zone incorrectly. We regret the error.]