Inside the World of St. Louis Artist Lauren Marx 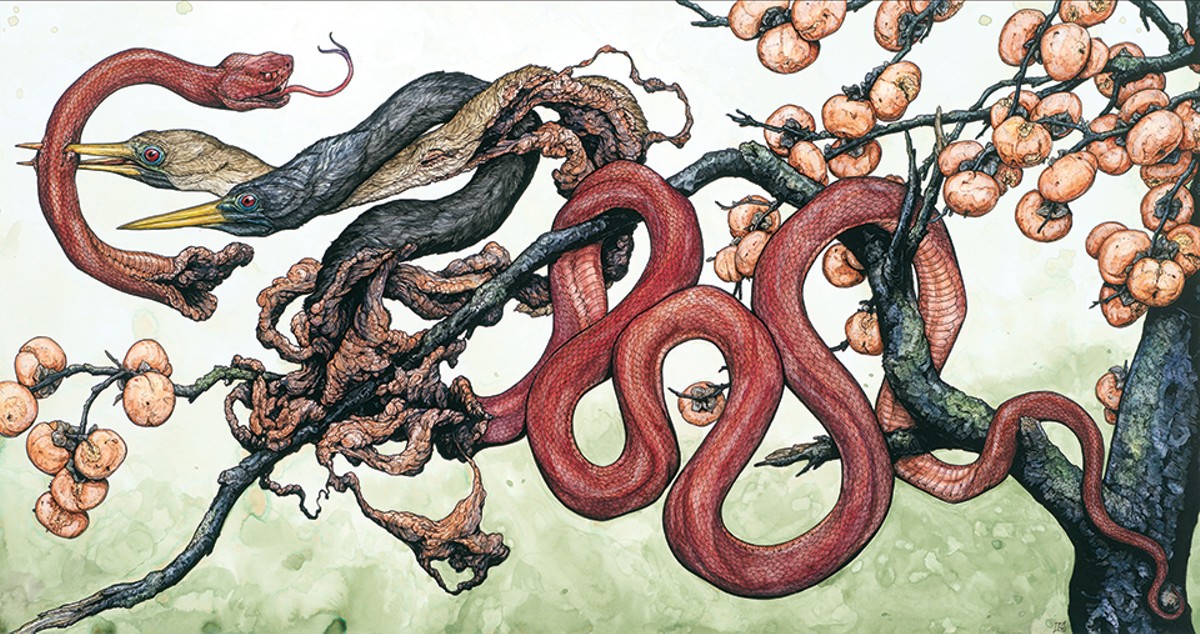 When fans tell St. Louis artist Lauren Marx that they love her work, which happens often these days, her response is always, "Why?"

In fact, asked to describe herself, the first word that comes out of her mouth is "cluttered." She explains that she means that both in the physical and mental context. "Can hot-mess be hyphenated?" she jokes.

Marx had never considered herself an "artist-artist," and she is not quite sure what to make of her rapidly expanding profile among admirers in and out of the art world. She's amassed 560,000 followers on Instagram and made around 15,000 sales through her Etsy shop, which includes original works as well as prints, stickers, T-shirts and other items adorned with her illustrations. By Marx's count, there are now hundreds of people who have her work tattooed on them — one man had one of her pieces inked on his head, which she finds a bit odd.

Her most recent success was the release of her new book on May 4, Sacred Decay: The Art of Lauren Marx. Four years in the making, it sold out on preorders alone and was quickly scheduled for an additional print run.

Marx specializes in a mixture of pen and ink and watercolor paintings that draw from the natural world. Her paintings live on the line between gore and an artist's representation of the life cycle, almost always including animals inspired by scientific illustrations and Renaissance art.

Seven years after graduating from Webster University, the almost 30-year-old (who tells the RFT "death is knocking any day now" because she recently discovered some gray hairs) simply hopes that she's made her city proud.

On her second-ever Zoom call — the first was dedicated to an appointment with her therapist — Marx chatted with the RFT about all things art, the artist's path to success and her unending love for the Lou. Answers have been lightly edited for length and clarity.

Let's jump into it. What was your experience like growing up as an artist?

It was, uh, it was pretty fine. There's a lot of artistic people in my family. So no one really questioned it. Looking back I was like, someone should have been concerned that if I wasn't good at this, there should have been a backup, but no one cared. It was just pretty normal. Everyone in my family kind of did something artistic. But I was the only, like, traditional artist — everyone else was music and things like that.

I see you went to school in St. Louis. What was your college experience like?

Oh, yeah, so I went to Webster University. I graduated in 2014. There were a handful of nice professors that were not full time. That's when I developed anxiety attacks and the shakes and all sorts of stuff. And I didn't really make a whole lot of friends. So, it was actually a really hard time. But I left that being able to handle pretty much any criticism at that point. Many people told me I was going to fail as an artist because of the style of my work and that they wanted to break me. And yeah, it was pretty rough. And I had a few people ganging up on me about a year after I graduated to try to get my degree removed.

It was based on the thesis. When you graduate with an art degree from Webster, you have to do a thesis and have two full-time faculty sign it. And there was just a fluke, where I couldn't have the two full-time professors sign it and it was due. So, I talked to the thesis professors and it was completely OK for me to have two adjunct faculty sign. And that did not go over well. But it got to the point where the department chair emailed me and said, "I've signed your thesis; you've graduated," and he's like, "I'm sorry this is happening to you."

There were a handful of people that were incredibly wonderful and encouraging and super sweet that were rooting for me 100 percent. And they were great. They kind of kept me a little bit sane during that. So yeah, that's kind of why I didn't go to grad school. One of my professors said — he was so sweet — he was trying to keep me encouraged. And he's like, "I don't think you should go to grad school. I don't think you can mentally handle it." Like, you're right. I absolutely cannot.

Did that experience dissuade you at all from making a career out of art?

It was kind of out of spite at that point, after being told that before my career had even taken off that it was going to fail. And yeah, I don't know how I got to that point, but when I graduated, I pretty much already knew I was going to do art full time. So, I didn't have any jobs or anything after that. And it worked out; it worked out really well. And there's still a handful that are very happy for me.

If you can share anything with young artists out there right now, what would it be?

Oh, I would say do only what makes you happy. Don't let people convince you to do something you don't enjoy. And that's usually what ends up making people not pursue it is after school or high school, or what have you: It's not fun anymore.

And to embrace social media. Social media is more important than galleries, in my opinion, so people need to really take that and run with social media.

And yeah, do whatever the heck you want. 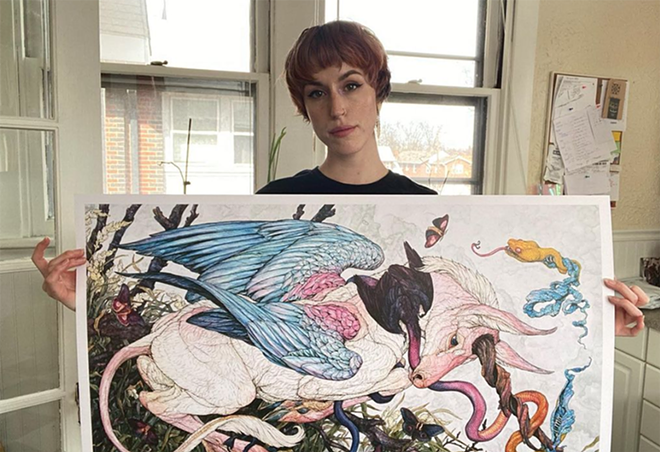 COURTESY LAUREN MARX
Even as her work takes off, Lauren Marx plans to stay in St. Louis.

Has the concept of being an artist changed since you've been out in your career? Or is it different than what you thought it would be in school, having social media as a new sort of tool?

Yeah, absolutely. Your older professors, some of them understand, but most don't really get it that social media has kind of changed everything. So when you leave art school, the idea you have in your brain is you're only successful with these shows and galleries and that is what you should do.

I still struggle with that, where most of my career's on social media these days, and I feel like I'm not doing what I'm supposed to do. The art world has kind of begun to implode on itself because of that, because no one saw it coming. It changed so quickly. I would say, over the last four years maybe, everything has really really shifted to social media, and other artists have started to dial back on the traditional ways of pursuing art as a career.