Insight Theatre Company's The Spitfire Grill Has the Spit, Lacks the Polish

Insight Theatre Company continues its seventh season with The Spitfire Grill, a feel-good tale of redemption that revolves around a diner in a struggling rural Wisconsin town and the few souls who still call it home.

Adapted from the 1996 film, the musical — long on flannel and earnestness, short on nuance and irony — is the sort of show that delivers its folksy charms as predictably as an order of eggs at your local greasy spoon: satisfying if you're in the mood, but they could probably use a little salt.

With music and book by James Valcq and lyrics and book by Fred Alley, Spitfire follows the plucky Percy Talbott (Sam Auch), a recent parolee who heads to Gilead after seeing an ad in a magazine and gets a job at the titular grill. Percy's a lady with secrets, but she soon wins over her no-nonsense boss, Hannah (Janet Wells), who's been trying to unload the joint for some ten years. Along with the long-suffering Shelby (Jenni Ryan), Percy hatches a plot to hold a contest, raffling off the diner to the best essay. But as the letters begin to stream in — much to the dismay of Gilead's gossipy postmistress, Effy Crayneck (Amy Loui), and Hannah's bitter nephew, Caleb (Troy Turnipseed) — Hannah reveals a secret of her own, and the town's restless sheriff, Joe (Pete Winfrey), along with several other cast members, discovers life's not so bad in Gilead after all. 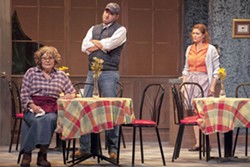 John Lamb
Get to know the locals in Gilead, Wisconsin.

Directed by Maggie Ryan, the show's acting and singing can be uneven, featuring fumbled lines and rough voices. Nevertheless, Spitfire also boasts some strong performances, with nice chemistry between Auch and Winfrey, who deliver numbers like "This Wide Woods" with aplomb. Loui takes a funny turn as the chattering town gossip, and Ryan has a strong, remarkably clear voice as Shelby.

Catherine Kopff's musical direction is generally sound, and Kyra Bishop's set is convincing. Still, there are moments when the production's technical seams begin to show, with shaky spotlights taking too long to find their mark, and the stage crew still striking props or actors still exiting the stage as the lights come up for the next scene.

These may seem like minor quibbles, but they are also the sort of technical polish any professional theater company must possess. Otherwise, rather than offering something "cooking at the Spitfire Grill," as the show's second number insists, the production risks coming off as half-baked.