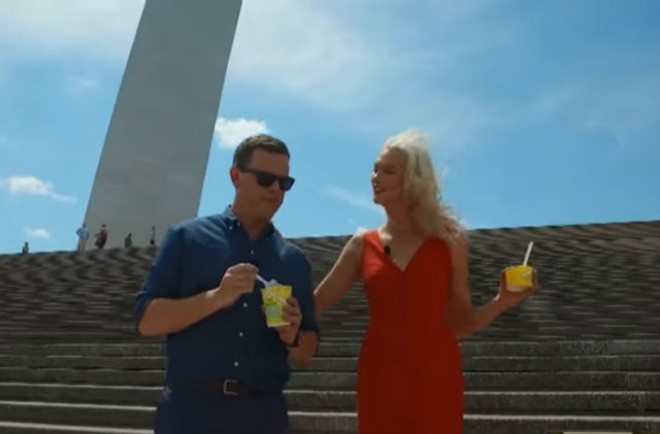 Screen grab via YouTube.
A few St. Louis icons made it on The Today Show this Sunday — including the Gateway Arch, Ted Drewes and Karlie Kloss.

The St. Louis-bred supermodel brought the national TV show to her hometown recently to talk about her rise to superstardom as a teenager and Kode with Klossy, a program she started to teach girls coding and encourage them to explore careers in the technology field. During the interview, she took Today Show host Willie Geist to the Gateway Arch, her high school and her family's home in suburban St. Louis.

Geist also got to experience what he called a "steamy summer day in St. Louis" (story of our lives, Willie) as well as Ted Drewes — which he incorrectly refers to as ice cream, but whatever.

"You are getting the best of the best," Kloss tells him in reference to the Arch and St. Louis' signature frozen custard.

In the interview, Kloss explains how her modeling career started in a mall fashion show in St. Louis and how she balanced her ascent with high school. Viewers are also treated to a prom photo, where the now 6'2" model is dressed in Dior couture ("as one does," she jokes) and appears to be a foot taller than her date.

The second half of the interview is devoted to Kloss explaining how she became interested in coding, took a coding class at the Flatiron School in New York, created a scholarship fund for girls to pursue math, science and tech careers, and formed Kode with Klossie. The program provides 300 girls across ten cities with free coding classes — and the cameras go inside what appears to be its St. Louis location.

This isn't the first time Kloss has given a platform to her hometown: back in May, she educated Vanity Fair readers on the virtues of Imo's Pizza.

See the complete interview below or by clicking here.