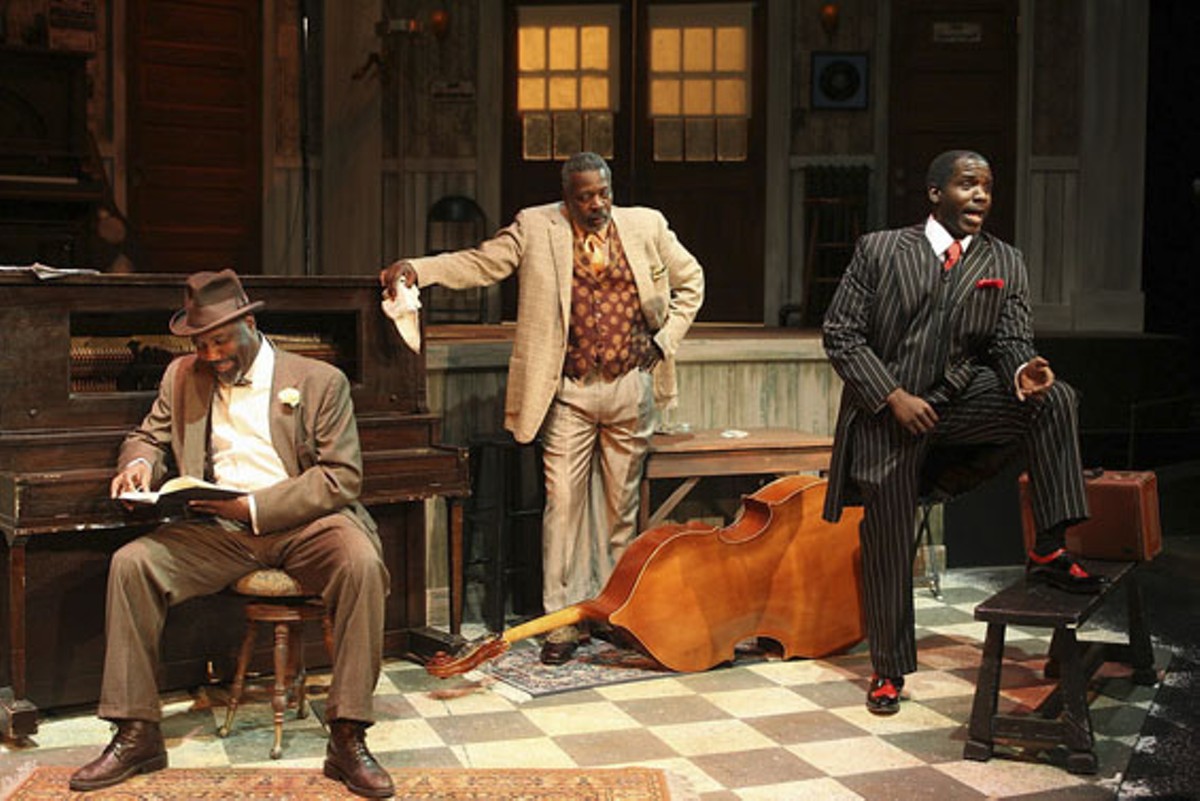 We are in a shabby Chicago recording studio (evocatively designed by Tim Case) on a wintry March afternoon in 1927. A white record producer (Tom Wethington) warily awaits the tardy arrival of Ma Rainey, a popular negro blues singer whose surly demeanor always leads to trouble. Not only does the producer dislike Ma's confrontational attitude, he doesn't like her sound. "Times are changing," he tells Ma's obsequious manager (Chad Morris). And indeed change is at the core of Ma Rainey's Black Bottom, August Wilson's penetrating 1984 drama that is currently receiving a stellar production at the Black Rep.

Ma (jaki-terry) lives according to the "if it ain't broke, don't fix it" school of music. She rejects the jazzy new arrangement of her signature song, "Ma Rainey's Black Bottom," that her ambitious young trumpet player Levee (Ronald Connor) has scored. "You supposed to improvise on the theme," he brazenly tells Ma, "not play note for note the same thing over again." Levee is eager to jumpstart life. "I don't need nobody to tell me nothing," he boasts. Nattily attired in a pinstripe suit and a snappy silk shirt, Levee anticipates the day when he will have his own band and make his own recordings.

The other musicians — Cutler (Antonio Fargas) on guitar and trombone, Slow Drag (Erik Kilpatrick) on bass, Toledo (Ron Himes) tickling the ivories — are not so easily roused. They are content to sit in the basement band room, smoke reefer and let the world pass by while they engage in spelling contests and discussions about such momentous topics as women, selling one's soul to the Devil and of course the black man's constant oppression at the pale hands of Mister Charlie. Like Levee's music, these conversations resemble improvisations on the theme — only here the theme is the black man's inability to change in a white world.

Eventually Ma arrives, clad in a full-length mink coat and with a sexy new girl friend (Evann Jones) on her arm. As promised, Ma is a handful. She insists that her stuttering nephew (Maurice Demus) participate in the first song she records. Then she brings the session to a capricious halt while she waits for a Coca-Cola. Ma's spiteful whims have little to do with artistic temperament. They stem from her acute understanding of her own expendability. "If you colored and can make them some money," Ma disdainfully says of her white employers, "then you all right with them. Otherwise you just a dog in the alley."

Ma Rainey's Black Bottom is the third installment in Wilson's epic ten-play "Century Cycle," which explores the African American experience in each decade of the twentieth century. The entire project is unprecedented in its ambitions and accomplishment. Although some of the plays are overwritten, that is not a concern here. As melodically staged by director Ed Smith, Ma Rainey plays out like a musical composition, with riffs and crescendos. The acting ensemble is uniformly outstanding. Most of the time you don't even think of these crusty musicians as actors. It's more as if we in the audience are flies on the wall in the studio.

Every time Ma's band begins to play a tune, Cutler, the de facto leader, provides a downbeat by drawling out the catchphrase, "One, two, you know what to do." Cutler also is providing a proper motto for the entire evening. Everyone involved with this absorbing Black Rep production knows what to do and has done it with impressive aplomb. Beginning with its provocative title, the content of Ma Rainey's Black Bottom may be disquieting, but this theater experience is a smooth ride from start to finish.