Where: The Maplewood streets of Manchester, Sutton and Greenwood Blvd.

Better than: Your velvet unicorn paintings.

''You remember them, Josh and Susan. You know, the party slaves we imported from Florida?'' said the woman casually to her husband, as they walked towards the festivities on Sutton. Crazy, but true! It's not the kind of thing you expect to hear from patrons of an art fair, but Let Them Eat Art is no ordinary art fair.

For the third year, Maplewood's shops, streets and galleries have opened up to feature a free festival of art, music, theater, shopping and street performance, in conjunction with France's Bastille Day. Though it was fairly well attended -- despite the ominous clouds and eventual downpour -- the festivities could have, well, been a little more festive. 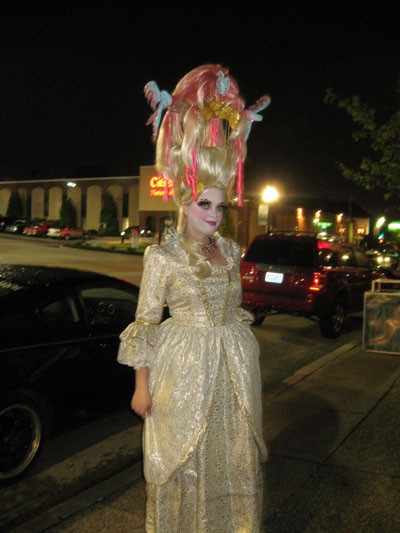 Part of the problem seemed to be the scant street advertising for the fair, aside from the small few signs posted in shop windows and the couple of larger ones at the intersections. People were driving up to other people on the street, asking what was going on, and those on the street seemed like they didn't really know either. The schedules that were passed out at various checkpoints didn't help plan your night, since they weren't in any sort of chronological order. Oh, well, art and revolution are both a little chaotic, so perhaps the randomness was intentional. At any rate, most people had a great time.

If you took your cues from everyone else, and decided to float like a social butterfly from place to place in search of fun, here is what you might have found:

Art: Art at an art fair? Yeah, I know, crazy, right? Of course the rain is going to put a damper on things (literally; go on, laugh), but more art outside would have been awesome. Maybe next year they'll erect giant tents like Schlafly's Art Outside event. Shops and restaurants showcased artists creating live, but since all of Mike Johnson's forty billion restaurants were packed, it wasn't always convenient for a viewing audience. The rain drove most inside for a bite to eat.

The Hoffman LaChance gallery and Studio Altius were deserted inside, the few times we went by. At Hoffman LaChance, a mixed media piece featuring a waterfall, constructed out of what appeared to be coloring books, stood out in the room. Other paintings of note in the gallery included small, vivid portraits of average Joes and a painted work featuring a plastic shopping bag hung up on a wire. Oh, the rich metaphor of modern life.

Kids used sidewalk chalk to decorate the space outside Studio Altius as a part of the ''Me Virus'' project, while inside hung some of the more visually stimulating pieces. Patrons admired the industrial looking crosses, apparently applied with great passion by Timothy Wagner, onto large canvasses, while a vocal group sang contemporary Christian hymns. One woman was really feeling it and danced with skyward stretched ''praise hands.'' Kind of awkward if you didn't expect it.

Art on the streets included a caricature artist outside T. Rohan Interiors, who drew an older couple for a mere $40 (yikes) and Solomon Thurman at Maya Cafe.

The crafty types were out in full force at their booths in Citizen's Park. This is where you could find pictures of elves, mermaids, handmade dresses and creatures and jewelry galore! Perhaps the craft art wasn't high-brow or fine, but it was certainly the most enjoyable.

Music: You may think that a Bastille Day celebration would feature some French music, but let's get real here, this is Maplewood and we need something you can dance to. Which is probably why most of the bands had a definite Cajun influence (partially French). The Maple Jam encouraged tips for their ditties at Citizen's Park, the Saint Louis Symphony String Quartet delighted the audience at the Focal Point.

Gyrating hippies young and old enjoyed Gumbo Head at the Mill parking lot stage. An enthusiastic five-year old girl danced spastically to the blues stylings of the Blue Lemmings, at the beautifully appointed Black Cat Theatre. It was impossible to hit every show, but worth the constant treks across Maplewood to see as many as you could squeeze in.

Performances: The best performance has to go to the three Shakespearian guys at the Black Cat Theatre who performed a highly suggestive, and perhaps inappropriate, Beastie Boys style rap about Othello's relations with Desdemona, to an audience of seven-year-olds and their horrified parents. Hilarious! Did they really think Shakespeare would be appropriate for kids? Have they read his stuff?

The scariest performance of the night was when one fire dancing yogi girl dropped another one, as she went down, so did the torch. The girls weren't hurt, but the smell of singed hair hung in the air.

In front of the Maya Cafe, three little girls did a highly entertaining song and step-dance routine that had some people stopping in their tracks to applaud. Others, pushed past, rudely, making snarky comments, in a hurry to go ruin some waitresses night, no doubt. Ugh, Commoners! Where are your manners, Public? What would Marie Antoinette say?

Speaking of the spoiled old queen, you couldn't have a Bastille day without a Marie Antoinette. Her hair, styled by Jeff Noble at Bouffant Daddy, was a miracle of modern engineering and somehow included a birdcage. Poor Marie, she walked the streets, greeting her adored subjects, unaware that they wanted to chop off her lovely head!

There were other performances, too many to mention actually, but hopefully those clueless parents at the Othello thing didn't take their youngsters to the Pop Tarts! burlesque show, presented by the voluptuous Lola van Ella, at the Focal Point. Burlesque shows seem to be all the rage these days, in St. Louis. Revelation! Is burlesque the new bowling? Hmm... those saucy French and their revolutionary ideas. Adieu, for now, mon amies, let us eat more art next year, Maplewood!