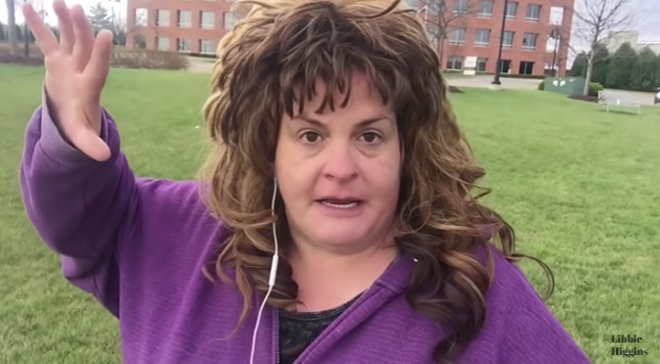 SCREENSHOT FROM THIS VIDEO
Though a new app, Higgins has made money producing videos of her character Carla, seen above, for customers including Tommy Hilfiger.
Social media has long been jarring, but you might have been unsettled lately by something new. There you are, minding your own business and spacing out on Facebook, only to see a friend getting a video birthday greeting from The Wire’s Michael K. Williams, in full Omar mode. What the what?

Chances are, you're seeing the product of Cameo, a new site/app that allows fans a chance to buy (for themselves or others) a personalized greeting from a celebrity. The idea is both so profound and so easy to execute that the site has become flooded with names that are both household-familiar and hyper-specific. You can get a birthday or anniversary greeting from the first actor to be killed off on Game of Thrones (Bronson Webb, for $20), a famed philosopher-swimmer (Ryan Lochte, at the recently reduced price of $100) or the singer of your favorite ‘80s metal band (Vince Neil of Motley Crue, for a healthy $300).

Or, if you prefer, you can get McScused by the internet's favorite uber-white-trash character Carla, the brainchild of St. Louis comedian Libbie Higgins.

The most populated subsection of Cameo talent is in the category of YouTube stars. That shouldn’t be a surprise, considering that these are folks familiar with building a personal brand through social media. And in that stewpot of names is Higgins. Working with her alter-ego Carla, Higgins has become a quick and avid provider of content at Cameo, with Carla as the hook and some unexpected names — including fashion designer Tommy Hilfiger — counted as customers.

Carla, Higgins explains, began as a character on Vine. “Vines were six-second videos so I created her to be a quick, one-liner character,” she says. “She was my most popular character on the app by far. After Vine died, I continued developing the character and making videos that were longer.”

Then, in 2016, came Carla’s star turn: “Woman Rages Over Extra McRib.” That video has since amassed nearly 7 million views on YouTube. And it gave Carla the online fame to make her perfect for Cameo.


In many respects, Carla is perfect for the service: She’s a bawdy, shit-talking, rough-around-the-edges type with a few patented catch phrases, such as her calling card, “McScuse Me?”

Typically, a customer will provide a few sentences of what they’d like Higgins to say, and then she’ll improv a funny shout-out to close the video. She currently charges $15 per video; Cameo gets 25 percent of that. The whole process takes place within the app. Everything from performance to payment is fully digital.

“I will get a notification through the app that says I have been booked,” Higgins says. “I get paid directly to my bank account, usually two to three days after I’ve completed the Cameo. Everything is done on my phone and I upload the video through the app. Cameo then emails it to the customer. I never have any contact with the customer.”

That said, there have already been moments when real life and app life mix. One, hilariously, involves the previously mentioned world-famous designer. With the app’s sense of partial anonymity, a Cameo she produced recently came into focus through several steps — including disbelief.

"The name of the person I was to address in the shout-out was ‘Tommy Hilfiger,'" Higgins explains. "I recorded the video and made a few wisecracks, like, ‘Are you the Tommy Hilfiger that made jean jackets and stuff?’ I thought someone was just being silly."

A week or so later, Higgins was tagged on Instagram by Dee Ocleppo, Tommy Hilfiger‘s wife. Ocleppo posted a portion of the cameo and thanked Higgins for making it for her husband’s birthday.

"I laughed for several hours," Higgins says. "So many celebrities commented on it, and that’s hilarious and ridiculous.”

Higgins says Cameo has been a great way to make extra income, on her own time. Even though Carla is a character that Higgins could do at a moment’s notice, she prefers to sit down and do several Cameos at once.

“It’s easier for me to just do a big batch of them at a time," Higgins says. "Sometimes I am not in the mood to do the accent and wear the wig.” 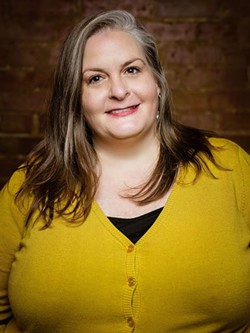 NATHAN PARKER
On the best of days, Higgins is a humble, self-deprecating performer and writer. She’s now in that period of her career where she’s making videos for fans across the country one day and telling jokes or doing improv in front of a hometown audience of only a dozen the next. All told, it’s a fascinating place to be. But Higgins keeps one eye on what she's going to do next.

"I’m working on a one-woman show that I can travel with, so part of the show will be me doing my regular stand up and the other half will be Carla doing ridiculous things," she explains. "Dancing, singing, crowd work, food reviews.”

She’s also started podcasting. Along with co-host Tina Dybal and recording engineer Randy Cash, Higgins has launched the podcast Slop City, a rambunctious show that’s funny and very much not safe for work. Typically, Dybal and Higgins riff on one topic, which quickly becomes ten, with occasional contributions from Cash.

According to Dybal, the podcast was born of the two knowing each other for years, having cut their teeth in improv classes.

"We wanted to keep it organic and just kind of see what happens without a format," Dybal says. "I’m excited to see what it grows into, because I think we’re still figuring out what Slop City even is. It’s been a blast so far and has been really well-received.”

Dybal believes strongly that Higgins' style presents a promising career for the comedian.

"Stand-up, video, acting, improv, sketch, movies, TV. I think Libbie’s future lies in all of the above," Dybal says. "She’s a jack of all trades, and she is hands-down one of the funniest people I know. She creates such hysterical content that everybody can relate to. She does all of this while staying true to herself and what’s funny to her. Through that she has a really dedicated fanbase that can’t wait to see what she does next.”

And for the low, low price of $15, you can create that next Higgins moment — with content delivered right to your pocket.