Life After Depth: Seven hours of Angels in America will knock you on your ass 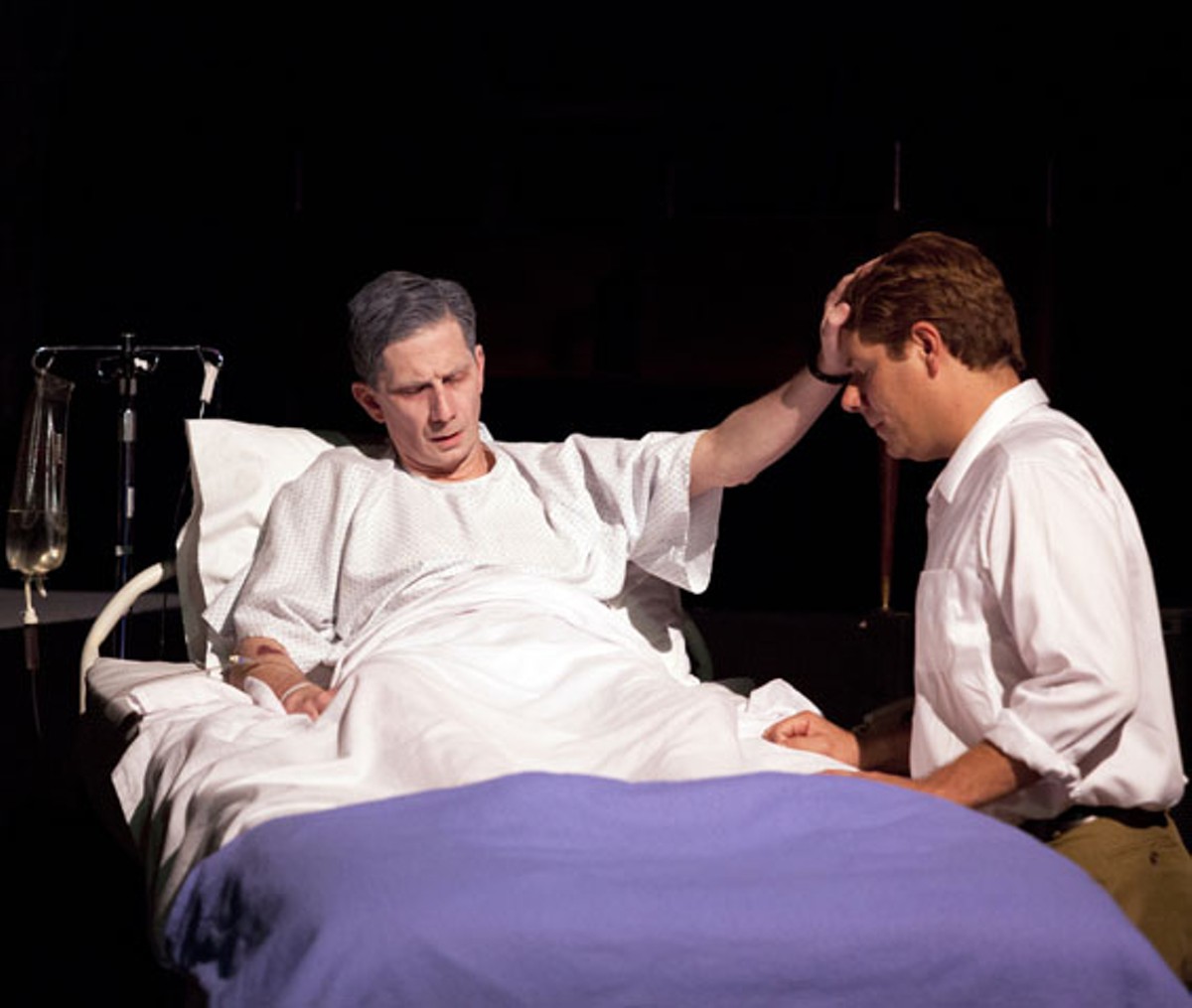 Life After Depth: Seven hours of Angels in America will knock you on your ass

The entirety of Tony Kushner's Angels in America takes seven hours to play out, here stretched over two nights by director Gary F. Bell. Stray Dog Theatre's production is an investment of time that wrings every erg of energy from its cast and transfers it to the audience with nary a wasted iota. And for a play nominally about the early days of the AIDS crisis, it's remarkably life-affirming.

Part 1: Millennium Approaches doesn't seem so positive on first blush. Prior Walter (Ben Watts) and Louis Ironson (Aaron Paul Gotzon) are a gay couple who now must face the specter of AIDS head on, as Prior is infected. Spoiler alert: Louis wants out as soon as he hears the news. Joe and Harper Pitt (Stephen Peirick and Rachel Hanks), young Mormons in New York City have a sham of a marriage to avoid; Harper escapes through pill-fueled hallucinations, Joe hides out at work (he's a lawyer) and takes long nocturnal strolls through heavily trafficked gay cruising sites. Then there's Joe's mentor, infamous attorney Roy Cohn (David Wassilak), who has contracted AIDS and is frantically trying to keep it secret while fighting for his professional life.

Kushner introduces the cast and story in Brechtian fashion: via quick scenes that tumble from one side of the stage to the other, right out in the open. Bell utilizes these rapid-fire sequences as Kushner intended, transforming the stage into a glorious kaleidoscope of stained glass and fiery language that sets up similar scenes with different combinations of characters, breaks apart both people and scene and then rebuilds them. As we hurtle through time and space, an inexorable forward progress carries both nights, making acts that surpass an hour seem much briefer.

Part 2: Perestroika is as much about living as Millennium Approaches is about dying. It's a touch less dramatic and less luminous than its predecessor, but here the characters actually achieve resolution of a sort. It feels criminal to single out any actor in a cast that's as dependent on the whole as this one is, but Ben Watts brings an endearingly arch quality to Prior, a man who speaks with angels and hostile mothers-in-law with the same rapier insouciance. His journey from healthy man to patient to dumped lover to heavenly prophet defies description, and yet Watts stays true to the course at all moments. Rachel Hanks similarly captures the entirety of Harper's broken spirit and fragile grip on reality without succumbing to melodrama. She and Watts share one of the most beautiful scenes in a work rife with them, when the two meet in a joint hallucination in Part 1, similarly brokenhearted. "Deep inside of you is a part that's uninfected," Harper tells Prior, then leaves him with a look of loss and longing that will yank your seat right out from under you. Is she talking to herself in another pill-popping frenzy, or did they really meet? At that moment, it's all one.

David Wassilak's portrayal of Roy Cohn is a wonder of refinement — which is a strange way to assess the flamboyant Cohn. More surprising is that Wassilak somehow makes Cohn sympathetic, even as he's bellowing profanities and racial slurs. This man who would not face his true self in the mirror is finally revealed to us in Wassilak's performance as a flawed and wounded human being, as imperfect as the rest of them. It really is the End of Days presaged when you find sympathy for the devil.

But Gary Bell's theme is the miracle of human imperfection. He closes his director's notes with a flourish worthy of the play. "We are wonderously imperfect beings bound together by precious life," Bell writes. "There is more to be gained than lost from every circumstance we face while here."

Including Angels in America, in all its mess and glory. Go and reap that whirlwind.