Lock Up Your Lover: Jon Hamm to Interview Neil Gaiman in St. Louis 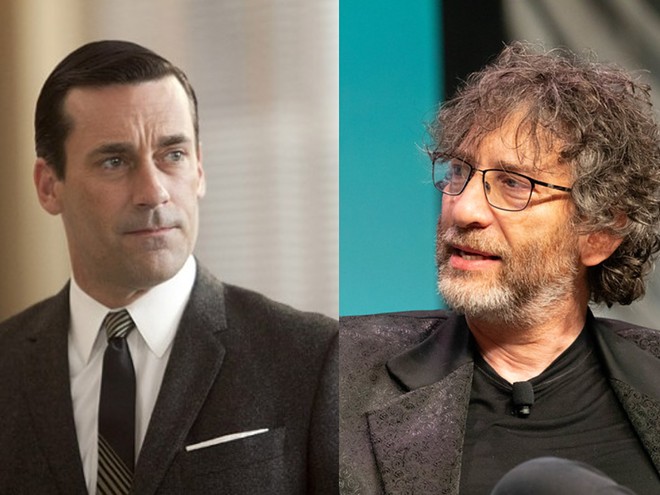 St. Louis is about to get a double shot of tall, dark and handsome — book nerd edition.

On April 13, our very own Jon Hamm will be interviewing Neil Gaiman when he stops by town to accept the 2023 St. Louis Literary Award, an honor bestowed annually by the Saint Louis University Library Associates.

It's set to be a match for the ages. And, at the risk of being super tacky, with Gaiman announcing his split from wife Amanda Palmer last week,  one that might put a lot of stars in fans' eyes.

It won't only be fans stanning over the combo of St. Louis-native-sexy-actor Hamm and fantasy-superstar-author Gaiman. The two seem to have an equally powerful crush on one another.

According to Variety, Jon Hamm's favorite book in college was none other than Gaiman's Good Omens, which became a wildly popular TV series in 2019. Gaiman created a character, the angel Gabriel, for that TV version seemingly specifically for Hamm.

"I got the lovely, wonderful Jon Hamm to play the angel Gabriel and sell you on the whole thing,” Gaiman told Variety about recruiting the actor. “I don’t know if it would have been as easy without Jon. ... I just thought, ‘Well, he has to be the best looking, best dressed, convinced-of-his-own-rightness boss you’ve ever had, and it doesn’t even occur to him in any universe that he could be wrong about anything. And who do I know that could actually play that and pull it off?'”

Catch the sure-to-be dynamic interview on April 13, 2023, at the Sheldon Concert Hall (3648 Washington Avenue), and there will be a craft talk on April 14 at Saint Louis University (1 North Grand Boulevard). Tickets will go on sale beginning at 10 a.m. on February 10.