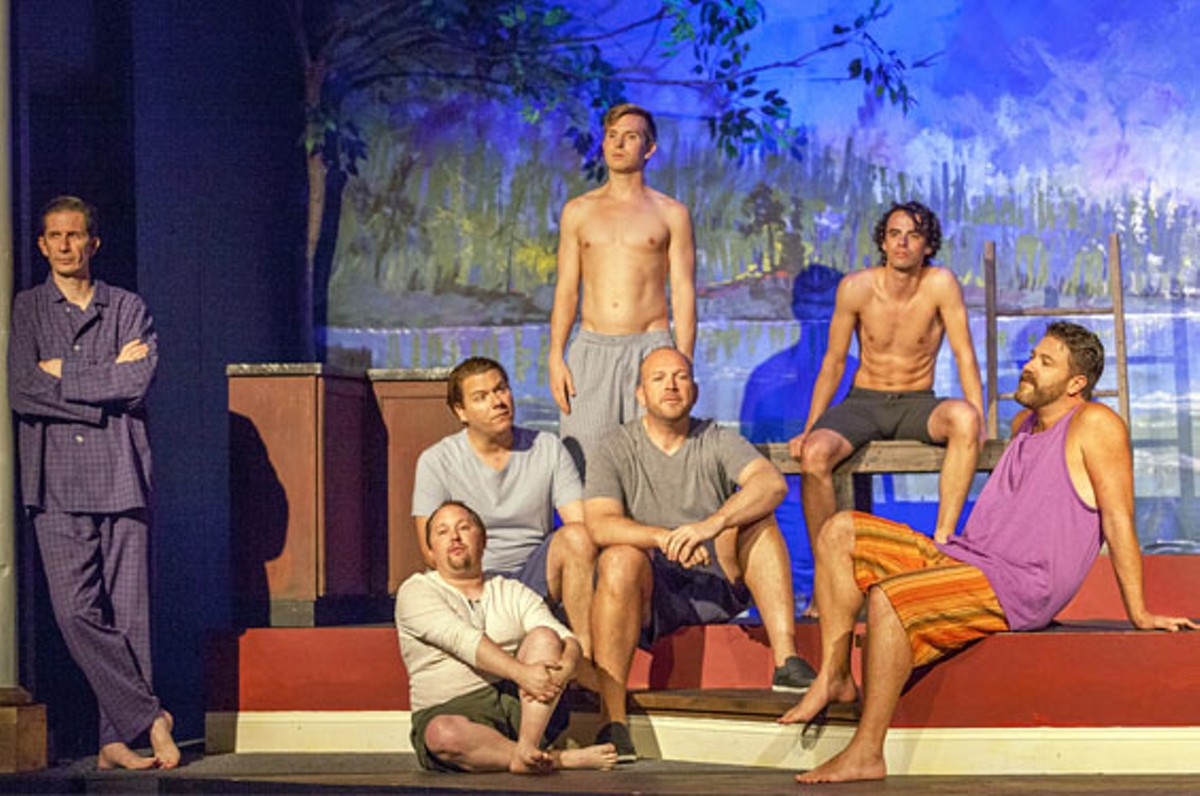 Shall I compare thee to a summer's day? How about an entire summer?

Because with a three-hour running time, Stray Dog Theatre's latest production of Terrence McNally's iconic 1994 paean to gay culture, Love! Valour! Compassion!, will at times have you yearning for fall — be it for a change of seasons, following a script that positively brims with full-blooded characters who endeavor to live and love fully, or for the curtain, after a production that has moments of real emotional electricity, but ultimately lacks focus.

Directed by Gary F. Bell, Love! Valour! Compassion! takes us to the tony lakeside home of Gregory Mitchell (Zachary Stefaniak), a successful choreographer who is struggling to regain his creative compass amid the wilderness of early middle age. He shares his country home with Bobby Brahms (Zach Wachter), his innocent and much younger lover who happens to be blind. Over the course of three summer weekends, Gregory hosts his group of (mostly) upper-middle-class gay friends, who spend their vacations falling in and out of love, flirting with each other, talking politics, arguing, boring each other, sexing, mourning, betraying and making peace.

It's a script of fabulous intricacy, and McNally plays with time and narrative structure as the story unfolds in a series of brief vignettes, with characters often breaking out of a scene to address the audience directly. They give us hindsight critiques of present action, only to re-enter the scene while infusing it with meanings that could not be apparent at the time. The effect is funny and deeply poignant, as these men, living in an era when AIDS was a death sentence and survival the stuff of luck and guilt, try to make sense of their lives.

For a guide we have Perry Sellars (Stephen Peirick), an attorney whose acid tongue and pessimism are tempered only by his desire to appear sociable and the pleadings of his long-term partner, Arthur Pape (Jonathan D. Hey), the humdrum accountant who quietly pines for young flesh. Together they form both an ideal and cautionary tale of pair-bonded homosexuality — stable but dull, they are immune from both the ravages and the ecstasies of blooming love. Playing foil to Perry and Arthur is Buzz Hauser (Patrick Kelly), a desperately lonely lover of musical theater who's slowly dying of AIDS, and John Jeckyll (David Wassilak), who matches Perry's acerbic tongue but lacks his filter. A pianist who often collaborates with Gregory, John has brought along Ramon Fornos (Chris Tipp), a young dancer whose talent and predatory sexuality accentuates the other characters' many shortcomings — be it Gregory's fear that he's losing his artistic edge, Arthur's whimpering lust or Bobby's burgeoning realization that he needs a partner closer to his age.

A grace note to this ensemble comes by way of James Jeckyll (again, Wassilak), John's angelic twin brother, who like Buzz is dying of AIDS. Wassilak shows remarkable range in the dueling roles, and one of the play's most moving moments comes as the disagreeable John finally tells James his many grievances. Wassilak (as James) also has many touching moments during his brief but deep romance with Buzz, who has many of the play's best lines. Meanwhile, Kelly, a gifted physical actor who is very funny to watch, delivers his choice lines with aplomb, but he speeds through others at such a clip that he can be hard to understand. Also very good are Stefaniak and Wachter, who as Gregory and Bobby have a gentle if flawed love they both try desperately to maintain. Similarly, Tipp, as the sexually cunning Ramon, is hard not to watch as he seduces the rest of the cast, often luxuriating about stage in his birthday suit. (He's not alone here; nearly every actor eventually strips nude.)

In fact, the entire cast is quite good, many having terrific emotional resonance with their romantic partners. Where it stumbles, however, are in the show's many group scenes (and some scenes between non-romantic friends). The ensemble lacks the sort of cohesion necessary to drive this very smart script to the next level. The talky play sometimes gets the better of them, and moments that should be meaningful occasionally meander off, appearing merely incidental.

It can be a little messy at times, not unlike the lives it portrays. 