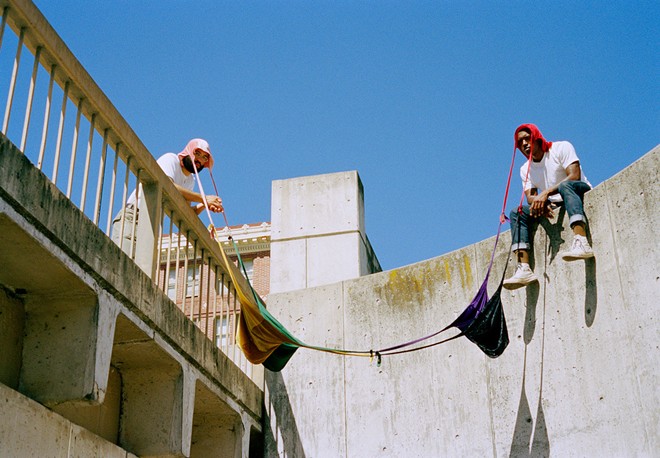 Adrian Walker
Adrian Walker's photograph "The Power of Kinship" kicked off the We Matter series, part of which is now on display outside the Luminary.

A clear blue sky frames two men. One sits, leaning slightly forward on a concrete wall. Across from him another man stands, tilted at the waist, with his forearms leaning against a railing. Behind them, a brick building peeks out. Both gaze back calmly at the viewer.

In many ways, it's a classic snapshot-of-life photo. Or, it would be — except for the do-rags.

Each man wears a velvety, brightly colored do-rag. But instead of having the ties wound around their heads, the ties connect to more do-rags, dipping into an arc between the two men and casting shadows in the bright sunlight.

Titled "The Power of Kinship," it's an arresting, beautiful image that invokes both fashion photography and photojournalism. The photo is part of the series We Matter, shot by Adrian Octavius Walker.

"[They are about] Black American beauty, beauty traditions amongst Black men," Walker says.

Walker debuted We Matter in 2018 at Southern Exposure in San Francisco, but St. Louis residents now have the opportunity to see it as a public art installation outside the Luminary (2701 Cherokee Street, 314-773-1533, theluminaryarts.com). The installation features six tall, pillar-like banners from that original series. Installed earlier this year, it will be on display through May 2023.

The Luminary installation was done in collaboration with PSA, a local public art project that does installations from St. Louis-based artists and writers. Walker, who hails from north St. Louis, approached PSA founders Shannon Levin and Marina Peng, with an idea to do something in St. Louis. But he didn't know exactly what. 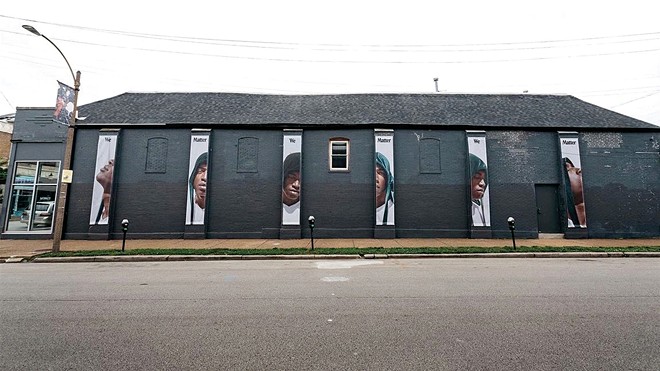 RJ Hartbeck
The We Matter exhibit, displayed on the outside of the Luminary, examines beauty traditions among Black men.

The three talked and emailed for a few months, playing around with text, but it didn't jibe with Walker. Then they found themselves going back to the We Matter images, breaking them apart and overlaying text. This, they realized, was it.

Walker hopes that the images will do more than just beautify the street and also have an impact on those who view them.

"I just hope people take a pause, you know, I'm saying to look at themselves," Walker says. "I just want folks to see themselves larger than life all the time."

Walker, who hopes to continue to do more public art, is happy to have his artwork — and the message it contains — accessible in such a big way. That accessibility speaks straight to the purpose and origins of We Matter.

The photoshoot that kicked off the series happened in 2014 in Oakland, California. Walker was photographing a line of do-rags a friend had created for commercial purposes. But when he got the photos back, he realized that the images told an unexpected story of Black beauty and intimacy among men, and he ran with it. The series has become one of Walker's most celebrated works, and a selection from it was displayed in the National Portrait Gallery in Washington, D.C.

Walker selected the name for the series in response to what was happening within the Black community at the time.

"It's one of those things where it's just showing that Black lives matter," he says. "Black male lives, trans lives, just all lives ... I'd say we matter as a whole, and that's what the title came from."

Though Walker now lives in Chicago, it's meaningful to him to have this work shown in St. Louis.

"To be able to root it back to where I'm from was super important to me," Walker says. "I mean, I could have had it anywhere, but the fact that it's at home just feels better. It feels more real."

The youngest of six, Walker grew up in the Jeff-Vander-Lou neighborhood in St. Louis in a single-parent household; his mother passed away when he was 10 years old. He spent a lot of time outside as a kid, catching bugs and thinking about being a scientist. Walker became an observer, always looking and searching for his own path away from some of the things he'd witnessed growing up.

He found himself wanting to document certain things, such as people's stories. Walker says that was the first hint that he'd go on to become a photographer.

But he didn't pick up a camera until much later. When he was in college, he and some friends had started Made Monarchs, an organization that put together themed events and booked shows. Walker began photographing to document what they were doing.

Eventually, the photography itself became the point. Now he's a photographer and senior art director at Getty Images — making his living from his artwork and his freelance projects.