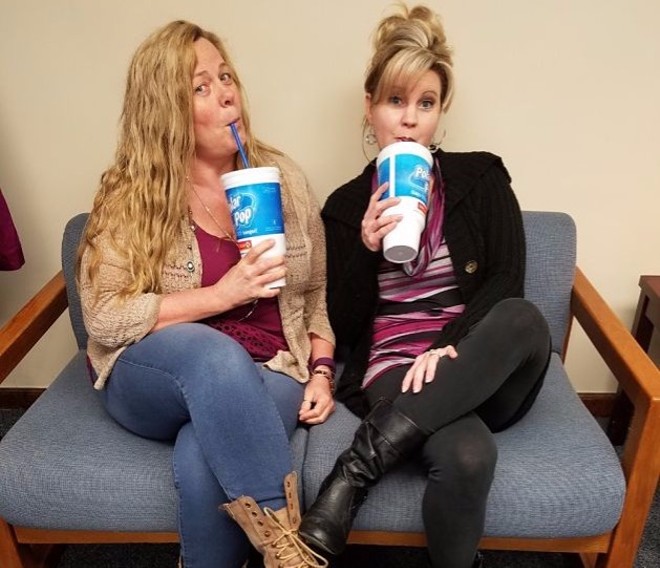 Photo provided by Janet Pullen
Joan Dunlap and Janet Pullen, Polar Pop queens.
When she first got the call, Janet Pullen was certain her nineteen-year-old son was playing a prank on her.

After all, the Craigslist ad she posted last weekend offering to sell a massive "Polar Pop cup collection" was written largely in jest. Free or not, who in their right mind would actually want 1,060 used styrofoam cups?

"I really didn't think anyone honestly was going to take them. I just did it as a joke," Pullen says. "In a couple hours my phone rang and I picked it up, and it was a younger boy — sounded like my son kinda disguising his voice — asking about the cups. And so I just said, 'Yes, I still have them, but who is this?' And they're like, 'We just want the cups.'"

Still not convinced it wasn't a setup, Pullen gave the young man the address to her work, where her unwieldy pile of non-biodegradable trash was located. It was only when showed up with his friends to pick up the collection that Pullen realized it was no prank — his interest was fully legit.

"When they walked in there was three boys that I didn't recognize," she says.

As they loaded up their car with their bounty, a flummoxed Pullen offered one request: "If you're gonna do something illegal, please don't take them."

Photo provided by Janet Pullen
Who wouldn't want this at their place of work?
Pullen's story serves as a fitting ending to the RFT's latest quest. We asked readers to help us identify the "maniac" who sold their Polar Pop collection on Craigslist. But thanks in part to Pullen and the numerous other readers who contacted us, our sleuthing has now determined that there is not one maniac, but rather a group of them — both the cups' seller and the group of teens who bought them.

Pullen, 43, started amassing her sizable cup collection some three years ago, along with help from her co-worker Joan Dunlap at the John Dietrich Insurance agency. Each day at lunch the two would purchase Polar Pop sodas from the Circle K located roughly a mile from work. (Pullen's drink of choice: Mr. Pibb with two shots of cherry snowcone flavoring.) At the end of the day, the cups would be added to an increasingly large stack in the office's break room.

"We would get sodas every day and we would throw them away, but we would stack a couple of them up first," Pullen explains. Then it started snowing. "We didn't wanna go outside and go to the dumpster because there was a lot of snow. So we just kept stacking them up. And then it became like, 'Hey, let's see how tall we can get 'em.'"

Over three years, the piles of cups grew to an outrageous size. The office was only used by three people — Pullen, Dunlap and their outnumbered boss, John Dietrich. "And he would add to them," Pullen laughs. "He wasn't quite the soda drinker we were, but every once in a while he would put his back there."

Recently, Dietrich made some remarks about wanting to clean up a little around the office. Pullen decided that this cup collection thing had probably gone on long enough and agreed to get rid of them. An avid devotee of Craigslist's "Free" section, she wrote up an ad and listed the cups, just to see what would happen. After all, it was hardly the strangest thing she'd seen on the site.

"Today there was a half-container of Metamucil on there," Pullen says. "And then there was somebody giving away a free chocolate cake they had bought. It had never been opened. A couple weeks ago somebody was giving away a chair that a pet snake had gotten loose in. They had to cut parts of the chair open to get the snake out, but they thought if anybody wanted the chair it was free for the taking."

In her wildest dreams she hadn't imagined anyone would actually want these things. But the kids who picked them up had big plans. 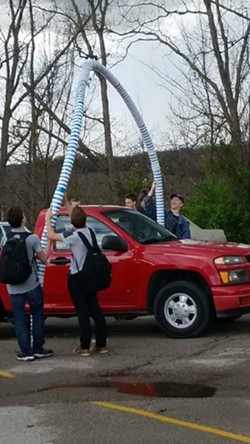 Photo provided by Nick Arl
A truck drives through a Polar Pop archway in the parking lot of Hillsboro High School.
We'll let them take things from here.

"Well, we saw the ad on Craigslist and we thought of all the big sodie possibilities we could do with it and all the sweet refills we could get with 'em," explains sixteen-year-old Sean Kehoe of Hillsboro High School. "So we had to have 'em."

Kehoe was one of the three who showed up to collect the cups, joined by his friends Eric and Trevor. Along with their friend Nick Arl, the group is the type that giggles a lot while giving fake names over the phone to a reporter — "say Keyhole, huh huh" — apparently unaware that said reporter has ways of checking such things.

The first move the friends made with their bounty was to build a giant archway in their school's parking lot, big enough for cars to drive through.

But that's only the beginning.

All told, Pullen says this experience has been a good one. Thanks to our posting, she's gotten quite a bit of attention and entertainment — she speaks of tears rolling down her face from laughing.

"It was just funny because it was such a goofy thing anyway and then it just turned into such a funny story after it all came out," she says. "So yeah, it was quite an entertaining day yesterday."

Asked if she and Dunlap have any plans for future collections now that this one is gone, Pullen answers in the affirmative: more cups.

"We realized today that we don't have any backup ones if we get a hole in one, so we'll have to get some more," she says. "So we decided we would go ahead and maybe do a stack — but maybe not a full-blown two or three-year thing like we did before."