Me So Thorny: Sondheim's Gypsy is a vicious masterpiece 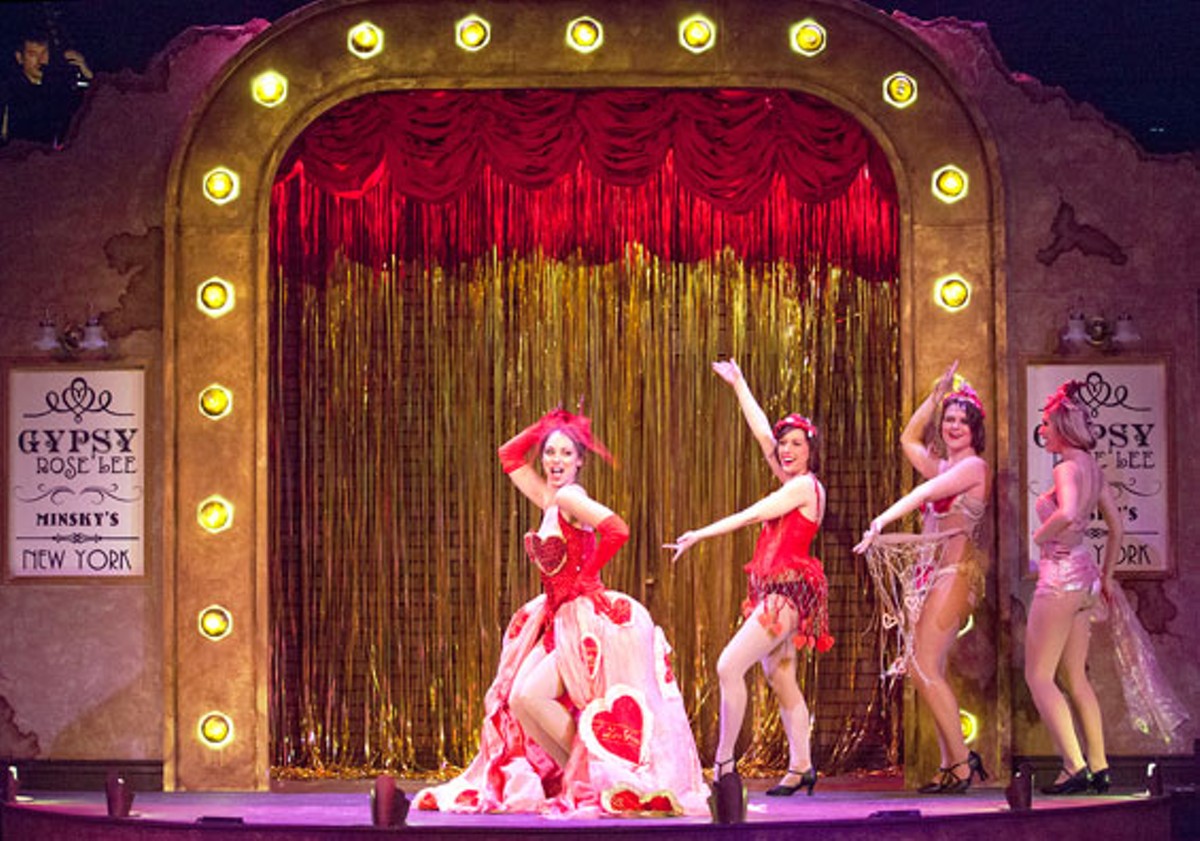 Me So Thorny: Sondheim's Gypsy is a vicious masterpiece

The modern world does not accept the presence of monsters. There are horrible people out there, sure, but we explain them away by deconstructing them until the monster is gone and all we have left are a series of symptoms and circumstances, e.g. rough childhoods, mental illness, "had a bad day." But we need monsters, because they serve as both warning and reminder that our humanity is a blessing and a fragile thing: If we lose our empathy, we lose ourselves.

Mama Rose is one of the stage's great monsters, a true reminder of all the damage that can be wrought by insatiable ambition. But that's not what makes her so monstrous; it's those rare moments within Gypsy: A Musical Fable when you can see that she's aware of what she's doing to her family — and herself — and proceeds apace. Deborah Sharn has the pipes for the role, and fortunately she has the technique as an actor to hold on to those pivotal moments just long enough to trick you into believing she's going to do the humane thing this time, even though you know very well there's no way she can stop herself.

Rose is, of course, the mother of Louise, the girl who grows up to be Gypsy Rose Lee, America's first star of burlesque. The story of Gypsy is truly the story of Rose and how she strong-armed her daughter to a life onstage. The price Louise paid was a childhood spent hopscotching from theater to theater, avoiding school, friendships and any semblance of a normal life. The price Rose paid was the loss of everything one could call one's own: food, love, a home, her father, her oldest daughter June and perhaps Louise as well.

It's a big, dense story that feels like a novel rippling by. Arthur Laurents' book and Stephen Sondheim's lyrics are witty and literate, developing character arcs and themes for all the major players. Director Gary F. Bell chose to stage the play very simply, as if we were watching a small touring company putting on a show under a makeshift proscenium. This decision reaps massive rewards, as it gives the impression that this company is presenting a favorite folktale and not an oversize production with a 23-member cast (including one dog).

Sabra Sellers plays the post-childhood Louise with tissue-paper fragility. Her mother has relegated her to a background player in her sister's life, a demotion that Louise bears meekly. Celebrating a forlorn, indeterminate birthday in a rundown hotel, Louise sings herself "Little Lamb," which includes the line, "Little lamb, I wonder how old I am." Sellers imbues this line with ineffable sadness, but no self-pity, a kernel of inner strength that is to serve her well.

Ken Haller brings all his considerable talent to bear on the role of Herbie, the nebbishy agent who devotes years to helping Rose to promote the family act because he loves her, completely and devotedly. His flirtatious duet with Sharn, "Small World," is a master class in acting through song, as Haller limns the portrait of a man who believes in love at first sight but isn't bold enough to say so.

But the night is mostly Sharn's to carry, and she doesn't merely carry it, she elevates it. Just before the second act starts, she comes out and perches on the edge of the stage, facing the players. Head down, just outside the ring of lights, not quite able to step into the limelight. This is Rose's curse writ plain. Then the lights come up and she's immediately screaming at her children to "sing out!"

The monster never sleeps. She only waits out there in the darkness. All hail the monster, for everything she does and every wound she bears for us.