Missouri History Museum Wants You To Color on its Walls 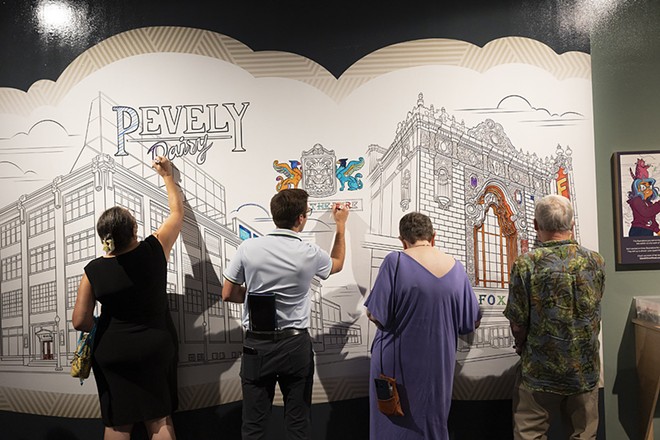 Pops of color peek out from black and white outlines on the walls of the Missouri History Museum. All along the walls of the 6,000-square foot special exhibition space are illustrations of 50 local structures printed on a white-board-like material. Buckets of dry erase markers sit out for visitors’ use.

Here and there attendees from the previous night’s member preview have added drawings: spider webs and people in windows, a plane shooting at King Kong climbing up Union Station or a ghost woman with her hair blowing in an unworldly wind atop Lemp Brewery.

“The creativity is already coming out,” says Andrew Wanko, Missouri History Museum public historian and content lead for the exhibition.

The color, the drawings and the outlines are all part of Coloring STL, an interactive exhibition that invites attendees to learn about St. Louis architectural history by drawing on the walls. The exhibition opens to the public tomorrow and will run through May 5, 2024. 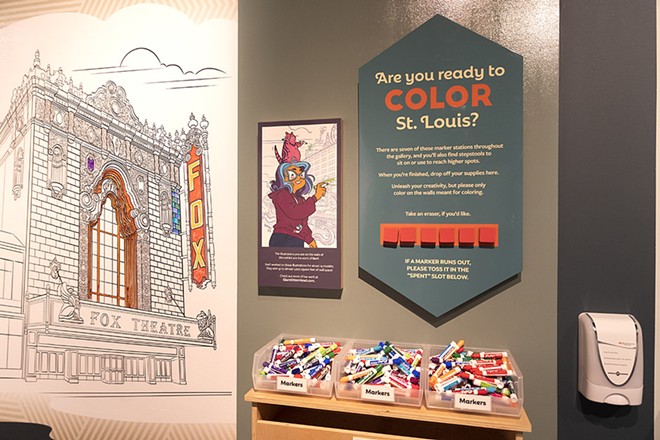 The illustrations, which were created by St. Louis artist Rori!, run the gamut from historical to modern. The oldest structure represented is a 1700s era Illinois longhouse, and the most recent is the 100 Above the Park Central West End building. Others represented include the Homer G. Phillips Hospital, Tony Faust’s Oyster House and Restaurant, Tower Grove Park shelters, and University City’s City Hall.

He points out the Railway Exchange Building, built in 1914, which takes up an entire city block and once housed a giant Famous Barr as well as office space. Newspapers at the time touted it as holding more people on a busy day than the entire city of Dallas, Texas.

“If you were alive in 1914 St. Louis, that would have been the landmark you would have wanted to see,” he says.

One wall features a colorable timeline of 21 common of residential building styles, an approachable way for visitors to learn about the architecture that likely impacts them the most. Styles include the St. Louis gingerbread homes, the two-family duplexes and even the Meet Me in St. Louis house as well as the home Sally Benson actually inhabited.

In addition to the colorable walls, Coloring STL includes interactive exhibitions exploring other facets of St. Louis architectural history, including the different varieties of red bricks and those iron stars that can be seen on brick homes throughout the city.

Turns out those stars are functional, not decorative, and were installed to keep brick walls from buckling outward.

“Sometimes you’ll see them randomly in a spot,” Wanko says. “That's the sign something went wrong on that building later.”

Other sections include original plans for several buildings; stained-glass windows; common building materials such as sandstone, the history that’s lost when buildings are demolished; and alternative designs from the competition that resulted in the Gateway Arch, including a design from Gyo Obata, the founder of HOK who passed away this year, that featured a 40-foot statue of Thomas Jefferson. 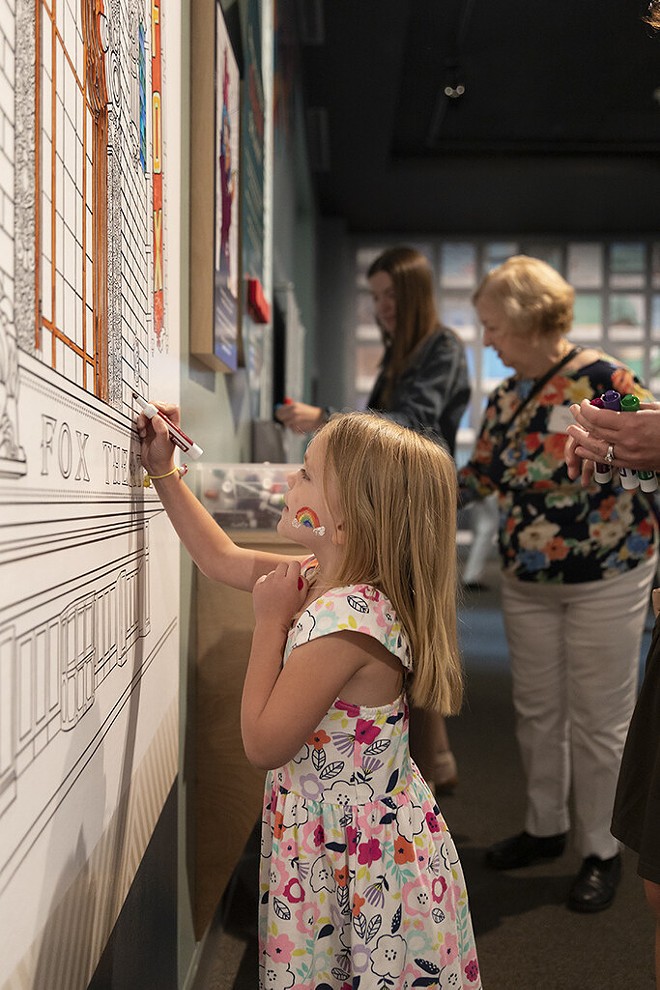 Courtesy Missouri History Museum
Coloring on the walls is encouraged.

Wanko and others at the museum have long wanted to do an architecture exhibit because of the frequent questions the museum receives from attendees on that topic. They knew they wanted to make it interactive but weren’t initially sure how to do so.

Then the coloring idea came up. Almost immediately there was a sense that this would be a hit, even if it was a crazy thing that no one had done before at this scale.

Right at the beginning of the pandemic, Wanko began work on the exhibition, a fairly quick turnaround from start to finish. Now that opening weekend approaches, he’s excited to let visitors in to experience the fruits of those efforts for themselves.

“It's my hope that, long term, in its own small way, this exhibit helps build pride and ownership in St. Louis, gets people excited about the city,” Wanko says. “There are so many stories and fascinating things hidden in the blocks we walk along every day. That is ultimately what I hope the takeaway is — that this inspires people to love St. Louis more and to explore the city even more.”