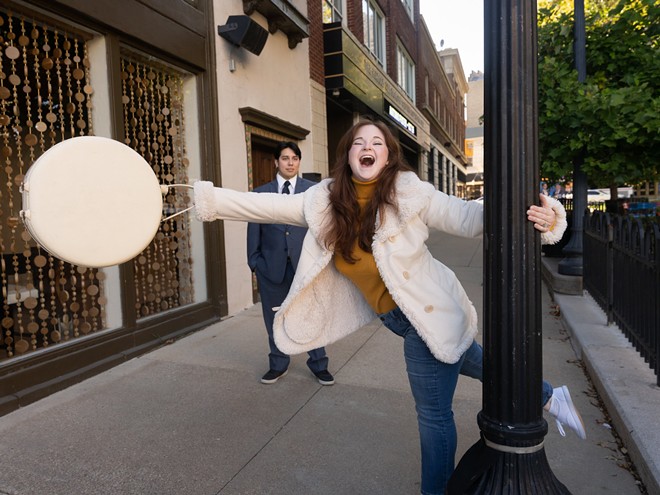 Carla Gibson
From right: Rhiannon Creighton will play Corie and Luis Aguilar will be Paul in Moonstone Theater Company's production of Barefoot in the Park.

Theater is roaring back to life in St. Louis, and among the companies staging daring new shows is Moonstone Theater Company, which will be doing two regional premieres in its three-show season this year.

The new shows are Adam Rapp’s The Sound Inside (January 26 to February 12) and Bess Wohl’s Grand Horizons (March 16 to April 2).

The Sound Inside had its Broadway debut in October 2019 and closed in early 2020 after 100 performances. Mary-Louise Parker starred in the psychological thriller and won a Tony Award for her performance.

“After I read the play, I was blown away by the writing,” says Sharon Hunter, artistic director for Moonstone.

The story follows Bella Lee Baird, a creative writing teacher at an Ivy League school, as she gets to know Christopher Dunn, an aspiring novelist with rage issues. He comes to her office each day to tell her about his book’s plot. It’s about a Yale student named Christopher who kills an unscrupulous stranger. Bella is fascinated, as is the audience, but is Christopher’s novel really fiction or does he have something sinister in mind?

The second show, Grand Horizons, was supposed to be in Moonstone’s last season (and debut in early 2022) but was canceled due to the omicron variant. The show is about Bill and Nancy, who after 50 years of marriage decide to divorce. The decision throws their adult sons into a crisis.

“It’s a Neil Simon-esque comedy,” Hunter explains. “Hilarity ensues with how the parents deal with the change. I can’t wait to finally produce the show.”

Barefoot in the Park is about newlyweds who have moved into a New York City brownstone and are struggling to live together. The carefree Corie wants worrywart Paul to “run barefoot in the park.” But can he?

Kicking things off with a lighthearted romantic comedy is intentional. “I just thought it would be fun to do something that people recognize and is near and dear to their hearts,” Hunter says. “We’ve been going through a lot of ups and downs in the past few years.”

Moonstone has also lowered ticket prices to help keep the theater accessible. Hunter also partnered with MindsEye Radio to do audio descriptions for certain shows. She hopes that the season and the accessibility bring folks back to the theater.

“It’s a season about exploring relationships and how you gravitate toward one another,” Hunter says. “It’s really about the human spirit and having empathy for another human being and what they’re going through.”

That’s something we all could probably stand to see more of.

Rosalind is the editor-in-chief of the Riverfront Times. She formerly worked for Washington University's alumni magazine and St. Louis Magazine. In 2018, she was selected as a Rising Leader of Color by the Theatre Communications Group. In 2014, she was selected as an Emerging Leader by FOCUS St. Louis. Her work...
Read More about Rosalind Early
Scroll to read more Arts Stories & Interviews articles (1)