Native Plants Will Save St. Louis, Then the World

Efforts like the Sunflower + Project have put St. Louis ahead of the curve 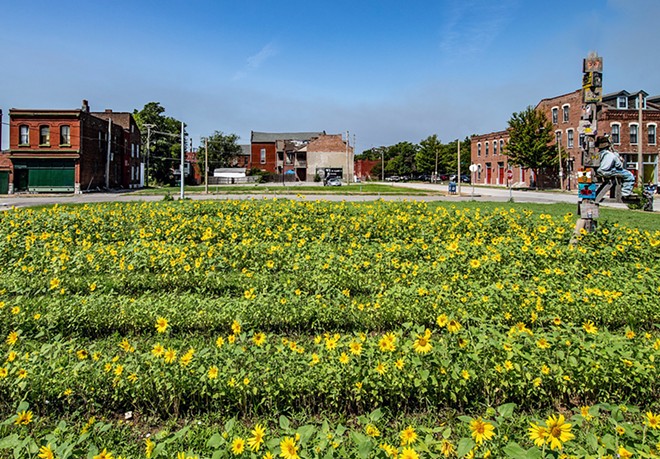 Two blocks south of Crown Candy Kitchen in Old North St. Louis, at the corner of Warren and 14th, there’s an unassuming square plot of green with a light pole in the center. Curving toward the pole is a row of sunflower seedlings just starting to leaf.

Seed Louie, a scarecrow, sits atop the pole wearing gardening gloves, a pink matted wig, a dirty brown beard and jean overalls; he holds a tin Route 66 sign. He was originally named Farmer John before taking a roman candle to the back of the head and bursting into flames. The perpetrators put him out and apologized. Since his PVC skeleton was still intact, Sunflower volunteers rebuilt and renamed him Seed Louie.

“Both times he looked suspiciously like me,” says Richard Reilly, energy programs manager for the Missouri Botanical Garden EarthWays Center, who runs the project. “But [Seed] is so beat up now I think the resemblance is minimal.”

The flowers, Seed Louie and Reilly are part of the Sunflower + Project, a group that develops and beautifies vacant urban lots with sunflowers and winter wheat. Originally, part of the idea was to see if sunflowers could extract soil contaminants on land that had once held industrial buildings, though the plants turned out not to be the most effective at this task.

Efforts such as the Sunflower + Project that use native plants to reverse damage or replace invasive species have the power to make the St. Louis region a more robust ecosystem capable of adapting to the changing climate. There are high environmental stakes, and it’s only one of many efforts in the St. Louis region that utilize native species in this way. When it comes to native plants, St. Louis is ahead of the curve, and it’s not only about community projects.

The conservationist Doug Tallamy has called St. Louis a leader in ecological landscaping thanks to initiatives such as the Sunflower + Project but also the stewardship of regular St. Louisans who choose to plant their gardens and community land with native species.

“People get turned on by it,” says Jean Ponzi, green resources manager at the Missouri Botanical Gardens. “It’s something individuals can do, which really does make a difference.”


The Sunflower + Project is all about turning vacant urban land into a temporary, sustainable, home for bugs, flowers, birds and people. Created by Reilly and Don Koster of Washington University, it had its first planting in 2013 on the plot at Warren and 14th, on which the Missouri Botanical holds a garden lease.

Reilly explained that the project considered other options, such as native grasses, “but those can take four to five years to mature.” Sunflowers are annuals, meaning they get planted and pop out the ground in accordance with their inherited genetic instructions — no need to lay down a big root network or bide their time.

The point of the project is to put as little investment into the land in order to yield the greatest return. “If you’re growing food, that takes about ten times the work of what we’re doing here,” Reilly says. At the Sunflower Project, “we’re basically providing a place to hang out, a beautification project. These things grow, and they attract bees like crazy.”

Birds, too — cardinals and house finches fly all over the square green plot. Robins hunt through the bees pollinating the clover grass.

The project managers believe that buildings, homes or stores should be built on this land. The “embodied energy” it takes to redevelop sites such as Warren and 14th require considerably less investment and ecological disruption than brand new infrastructure. Streets, gas, power and sewers already exist in Old North.

“Especially on the north side,” Reilly said, “where there’s more than enough vacant land to keep plenty of it green and redevelop a whole bunch of it, too. And if redevelopment happens in places like this rather than on the edge of cornfields, we’re all going to be a little bit better off.”


Every year the world loses insects. In Germany, there’s been a loss of about 75 percent of insect biomass over the last 26 years. It’s just as bad in North America, especially the Midwest. Though the drop seems to be leveling off, the Midwest is estimated to lose about 4 percent of its bugs per year, reports the Associated Press.

Native plants provide a home for native insects. Take, for example, the dramatic drop in the monarch butterfly population. Monarchs evolved to only host their caterpillars on milkweed (asclepais) plants, which are native to Missouri, meaning they’ve been here a long, long time. Long enough that monarch butterflies didn’t see humans coming and put all their evolutionary chips on milkweed. Meanwhile, our human urbanization, monoculture farming, herbicides and invasive species decimated milkweed.

In 2014, former St. Louis mayor Francis Slay enacted the “Milkweeds for Monarchs” program, and not far from the Sunflower + Project, a butterfly garden thrives on St. Louis Avenue.

“For some people,” Ponzi pointed out, “an experience of the natural world is not comfortable out of the gate.” Biodiversity doesn’t mean wall-to-wall butterflies and bees. The decline in biomass includes spiders, squishy larvae and the dreaded summertime mosquito.

But there’s much to know about the tiny vampire. There are 3,500 unique species of mosquitoes in the world. “Most of them have nothing to do with humans,” Ponzi pointed out. Only a few species bite us and only the females.

The vast majority of mosquitos live off animals, fish or other insect larvae, and lots of other creatures eat them in turn — making the little pests a major link in the ecological food web. 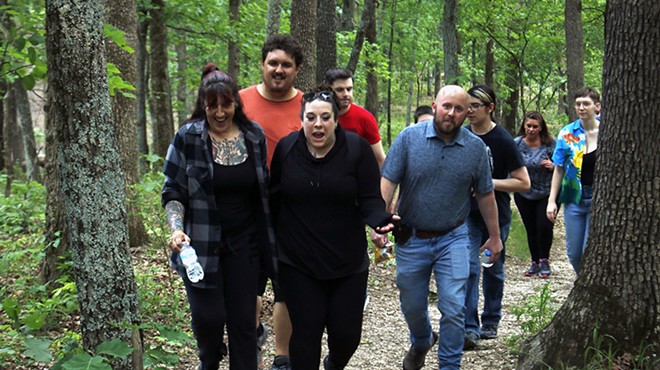 
“Bug spray kills bugs. Period,” Ponzi says. “They do not differentiate.” When St. Louis city or county fog neighborhoods to crack down on mosquitos, they are only knocking down the fully grown adults. Fogging does not interfere with germination, and St. Louis County doesn’t use any chemical that sticks around very long.

Unfortunately, store bought pesticides and extermination services that promise bug-free lawns for 30 days do spray chemicals that stick around, indiscriminately wiping out whole levels of the insect food chain.

For Ponzi, and environmental thinkers like E. O. Wilson, the relationship between insects and pollinators is a love story. As gardeners, “we can be a part of that romance,” she said. “Native plants are the strongest matchmaker that we can incorporate into our landscapes.” Biodiversity means richness, color, and liveliness. “It’s also essential for ecological health, which includes human health. And it’s fun! You don’t have to suffer,” Ponzi said. “Go to your locally owned garden center, and they will have native plants.”

About 70 percent of plants on a plot of land should be native, both Ponzi and Tallamy agree.

“When you think of a monoculture,” Reilly says, “you think, alright, we’ve got this big grove and it’s full of all one tree. Right? If something bad happens to one, it happens to them all. Versus having the kind of resilience, you would get with a diverse grove — those are the kind of things I think are pretty important.” 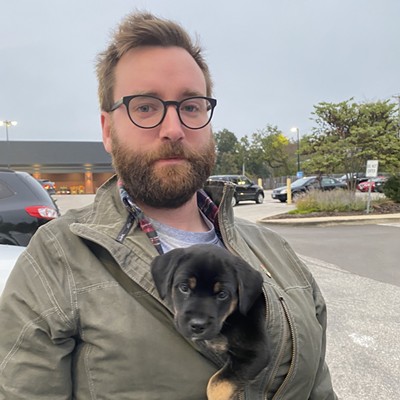