Via DreCo
Andraeco Craig aka Dre’Co continues to build momentum as he headlines this Saturday, April 30 at Off Broadway.

Dre’Co
From rapping over beats made by his cousin to manifesting a distinct style of his own as heard on 2021’s Therapy Sessions, Andraeco Craig a.k.a. Dre’Co has had his foot firmly on the gas pedal of a burgeoning hip-hop career. The prolific musician no doubt made an impact in recent years, and he keeps making waves as evidenced by a recent collaboration with Glory Pro Wrestling. The St. Louis-based wrestling promoters not only picked Dre’Co as their local spotlight artist in April, it even picked up the rapper’s single “Way Up” as the official theme of their big fight night at the Pageant that featured globally renowned wrestlers Minoru Suzuki, Danhausen and Dante Martin among many others. Dre’Co will be coming into this Saturday’s show with the kind of momentum that’s hard to stop, and later this year he’ll return for a victory lap as part of Hip Hop Fusia Fest alongside fellow St. Louis heavy hitters Illphonics, Looprat, the Domino Effect and more.
8 p.m. Saturday, April 30. Off Broadway, 3509 Lemp Avenue. $20. 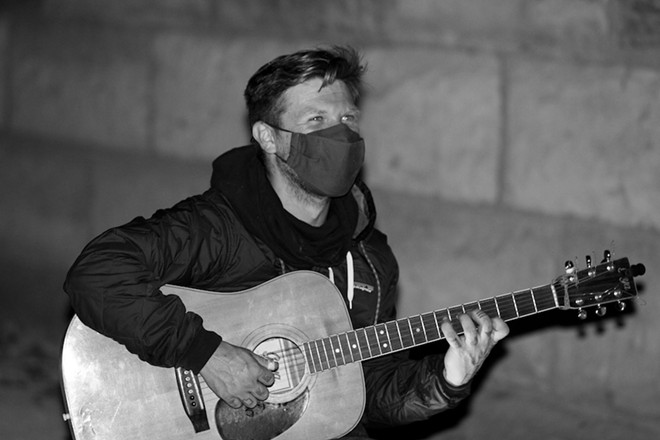 Synoptic Frequencies 1: Experimental Music in Sacred Spaces w/ Aria Thomé, Lake Mary, Oxherding, Sun Castle, Ellen Hilton Cook and Eric Hall
As the inaugural edition of a new concert series, Synoptic Frequencies 1 is primed to set a standard for future iterations with a diverse lineup of St. Louis creatives who take an exploratory approach to electroacoustic music. Streaming concerts have evolved in the past two years, and while that’s a safe alternative to packing a cramped concert space with warm bodies, the crew behind Synoptic Frequencies understands that an intriguing locale can lend just as much to an event as the performing artists. On this night, Gethsemane Lutheran Church will transform into an incubator for audiovisual art as choir director and sound-healing practitioner Aria Thomé leads a lineup of local mainstays for a concert inside an ornate atrium punctuated by live visuals from video artist Aaron Owens. Of special note on this show is Oxherding, the soundtrack-esque solo endeavor of Fitz Hartwig, one of the curators behind this exciting new semi-regular series of shows happening inside sacred spaces throughout the St. Louis region. 6:30 p.m. Saturday, April 30, Gethsemane Lutheran Church, 3600 Hampton Avenue. Free. 314-352-8050.