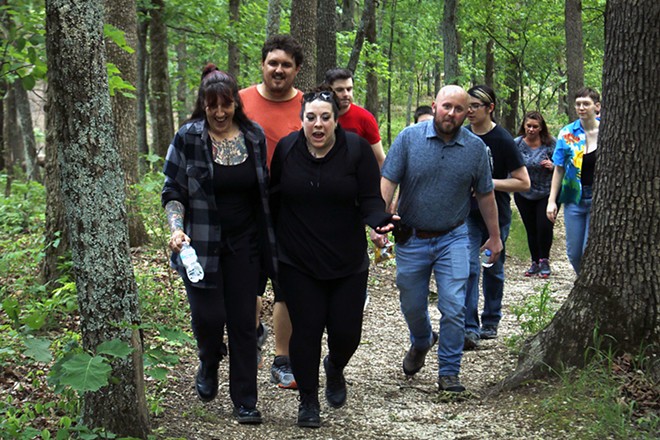 On May 11, Amber Strautkalns put out a call on Reddit. As a mom of three, Strautkalns sought an inclusive group of like-minded introverts she could enjoy the outdoors with. The only groups she could find were helmed by fitness junkies with washboard abs.

Strautkalns answered her own question two days later after an outpouring of people said they wanted the same thing. She designed a graphic and posted it on social media to invite fellow “chubby alterna” parents, or anyone interested, to join Fat Stoner Babes — a stoner-friendly, introvert-loving, body-inclusive hiking club.

“I just wanted to hang out with like-minded individuals and people who were also introverted and have a hard time getting out of the house,” Strautkalns says.

To her surprise, people showed up. About 30 people came to Creve Coeur Park for the club’s first excursion on May 15. Fat Stoner Babes has several more hikes in St. Louis parks and nature areas scheduled for throughout the summer.

Strautkalns, a former photographer and a stay-at-home mom, craved a way to have some grownup time away from her kids. Though all the hiking groups she found online didn’t seem to fit her vibe. 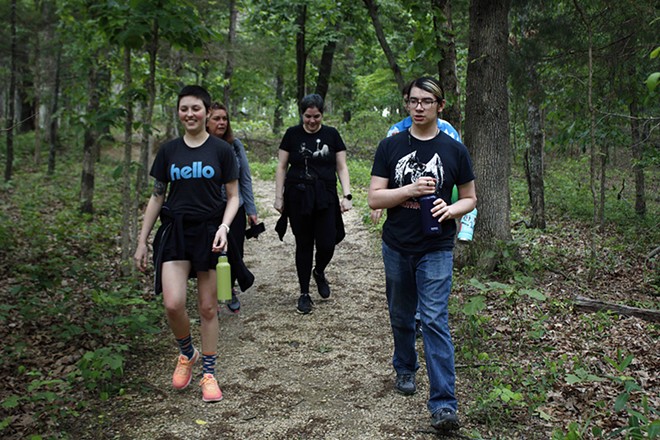 Monica Obradovic
Strangers from Reddit chat on a Fat Stoner Babes hike in May.

“I’m chubby, I like to get high and go for walks,” Strautkalns says. “I’m not trying to hurry to the finish line, and I’m not going for exercise. We’re just gonna get out of the house and get some fresh air.”

At a recent hike at Rockwoods Reservation in Wildwood, a group of mostly strangers met near a trailhead. They chatted about their lives and what brought them to the club as they explored a two-mile trail with creeks and caves.

For Caroline Berg, the club seemed enticing after a fruitless search for an inclusive physical fitness group.

“People tend to be hard-core fitness enthusiasts, and that’s not always the vibe that people enjoy,” Berg says.

Same goes for Allison Morgan, who found the club on Reddit. “I just moved here from Ohio, and I was looking for stuff to do in St. Louis,” Morgan says. “[The club] seems really open and inclusive. Just good energy.”

Despite the criteria included in the club’s quirky name, Strautkalns says that’s exactly what she went for. Just good energy and calm vibes. All she hopes to do is build an inclusive community where all feel welcome.

“I’m trying to enjoy myself here, and I want other people to enjoy themselves, too,” Strautkalns says. “That’s hard to do when you’re self conscious or you struggle just to be out of the house for whatever reason, whether it’s mental health or you’re busy with kids. Whatever. We’ve all got our stuff.”

Native Plants Will Save St. Louis, Then the World