New Line Theatre's Anything Goes Is Tart — and Hilarious

If there's a surer thing in musical comedy than Cole Porter's Anything Goes, I can't think of it. Its steamship setting and 1934 period is so far in the past as to be an unknown country, and 80-plus years of rewrites, additions and rearranging of songs and scenes allows the show to be anything to anyone. The modern version of Anything Goes avoids reality entirely, with zany comedy, fantastic costumes and broad performances gilding the lilies of Cole Porter's songbook.

As such it's a strange choice for St. Louis' self-proclaimed "bad boy of musical theater," New Line Theatre. And yet, here we are, with directors Scott Miller and Mike Dowdy-Windsor charging right up the gangplank of the S.S. Fantasy America. Working with the 1962 version of the script and incorporating Miller's standard deep research into the original show's origins, the boys have found an Anything Goes that's sharper, tarter and more satisfying than you'd think possible. In all honesty, I haven't laughed so much at any play in quite some time. And it's not just the zany comedy that gets you; it's the skewering of the super-rich, talentless celebrities, the British and indeed anything else that walks across the ship's deck.

Somehow, scenic designer Rob Lippert has squeezed most of a ship into the Marcelle Theater, complete with multiple decks and a small band in the prow. We watch a host of wealthy people pose for a society photographer and then board the ship to escape dreary, Depression-era America for fun and no sun in England. Among the glitterati are blustery Wall Street tycoon Elisha J. Whitney; evangelist-turned-entertainer Reno Sweeney and her backing dancers, the Angels; hapless "gangster" Moonface Martin and his boss' moll, Bonnie Letour; Mrs. Evangeline Harcourt, her daughter Hope and Hope's fiancee Sir Evelyn Oakleigh; and Billy Crocker, Whitney's whipping boy, who's smitten by Hope. Billy wants more time to change Hope's mind about her impending passionless marriage, so he stows away and wreaks havoc on the ship while wooing Hope and donning increasingly ridiculous disguises. 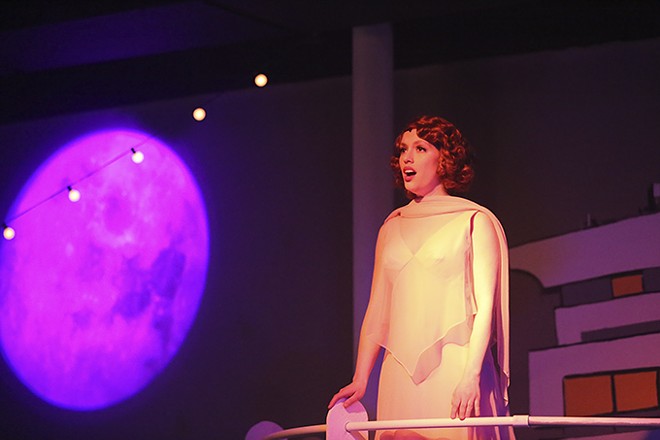 JILL RITTER LINDBERG
Hope Harcourt sings her heart out to the moon.

Hope (Eileen Engel) and Billy (Evan Fornachon) are delightful together, flirting and fighting when together and falling to pieces whenever they're separated. Both Engel and Fornachon have outstanding voices, and their duet on "All Through the Night" rivals the balcony scene in Romeo and Juliet for pure romantic longing. Fornachon also gets to try out a number of bad accents for comedic effect, all of which hit the mark.

New Line stalwart Zachary Allen Farmer reimagines Sir Evelyn as a permanently embarrassed English gentleman and almost runs away with the show. His nervous, noncommittal grunts when asked to appreciate the beauty of the full moon, his delight at the ripeness of American slang and his absolute unflappability when he learns that Hope stayed out with Billy until 7 a.m. spark guffaws from the crowd. ("You got your moonlight, I got my beddy-bye. 'Twas a perfect night," he sniffs.) It also makes Reno's eventual seduction of him all the more real.

Speaking of Reno, Sarah Porter turns in another sterling performance as the all-brass bombshell, which should be no surprise (her dancing Angels are also top-notch, as is their choreography, by Michelle Sauer and Sara Rae Womack). Porter's Reno is wry, wicked and startlingly vulnerable when she confesses to Sir Evelyn that her fake seduction of him has grown into the true love. It's the first time I've believed it when Reno says she loves him, rather than just accepting it as a necessary plot twist.

Reno and Evelyn's convincing romance is not the only major change. Moonface Martin (Aaron Allen) is now more schnook than crook, as nonthreatening and inept as the perpetually drunk and mostly blind Whitney (Jeffrey M. Wright). Allen lurches around the stage with rounded shoulders and big dreams of moving up on the most-wanted list (he currently stands at No. 13), but mostly gets bossed around by the man-eater gun moll Bonnie (Sarah Gene Dowling), who's working her way through the crew at a prodigious clip. Allen's physical comedy skills get a workout as well, losing a wrestling match with Reno and Method-acting his way through "Be Like the Bluebird."

Do you want to think about the ramifications of all of these beautiful, happy-go-lucky people living out their dreams with Champagne flutes in hand, while back home Americans crowd the breadlines and don't know where they'll sleep tonight?

No? Me neither. Forget the backdrop to the story and instead, let's appreciate the New Line Band, which is led by Nicolas Valdez and treats Porter's songs very well indeed. Let's be like the president; screw the poor and slip away for some fun this weekend aboard Anything Goes.