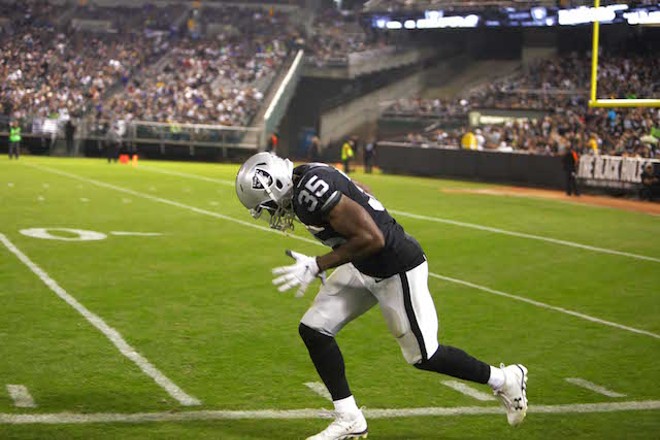 COURTESY OF ABBY MODAFF/GREENVILLE UNIVERSITY
Nicholas Morrow.
College football season kicked off this past weekend, with millions of fans across the country packing into massive stadiums, many larger than the NFL stadiums that most players strive to play in one day. Most of those games are televised to many more millions watching at home.

Then there are stadiums — like Greenville University’s Francis Field in Greenville, Illinois, 40 miles east of St. Louis — that on Saturday will host their home opener to an expected crowd of a few hundred on humble aluminum bleachers.

Greenville University football exists in a world far from the celebration and celebrity of big-time college football. It's a member of the NCAA's Division III, the non-scholarship, lowest tier of collegiate athletics. Universities like Greenville, a school with around 1,200 undergrads, is where high school players who have been passed over by the larger divisions go to pursue their athletic dreams.

Many fine athletes compete at this level, but most understand the reality of a non-scholarship player at a small school is more or less an extracurricular activity and not a ticket to the NFL. In fact, Greenville, like most D-III colleges, has never been a path to the NFL for anyone.

That is, until now.

Nicholas Morrow was born in St. Louis to Lloyd Morrow, a Baptist preacher, and Erika Morrow, a school teacher. When Morrow was one, his father felt a calling to head south, and moved the family to Huntsville, Alabama, leaving behind extended family in Hazelwood and a grandmother in Soulard.

Like most of the South, Alabama is football crazy. Morrow was first introduced to football in second grade. Unlike many of his peers in Alabama, though, football did not come naturally.

“I was horrible. I was really timid and I didn’t understand football at all,” Morrow recalls. In fact, the first time he got the ball in a game, he dropped to his knees immediately to avoid being hit. He quit football soon after, only to truly return to the game in high school. At Huntsville High School, Morrow bounced around positions, playing offensive line through his junior year, and eventually moving to outside linebacker his senior year. He was certainly a late bloomer, and although he improved greatly from his initial football experience as a seven-year-old, he didn’t attract any attention from college scouts.

But Lloyd Morrow was aware of a small Christian college in the St. Louis area that had a Division III football program. The younger Morrow reluctantly committed to Greenville on his father’s strong recommendation, and headed off to the Midwest in the fall of 2013. Morrow arrived to Greenville without a true position. Given his size and athleticism, the coaches placed him at outside linebacker, a deep position group led by several upperclassmen. Morrow battled it out in training camp, and won the starting spot after his first scrimmage against Washington University in St. Louis, beating out several upperclassmen for the spot. 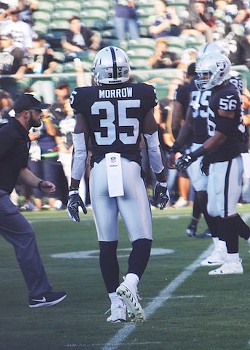 “We knew pretty quickly he was special," recalls the university's head football coach, Robbie Schomaker. "He was really skinny back then. But he dedicated himself in the weight room to maximize his size and speed. He went from being an athletic kid running around and making plays to someone who was dominant physically and athletically.”

In his time at Greenville, teammates recall discovering Morrow in a little-known corner of campus that housed some surplus workout equipment, getting in extra work on his own, long after mandated practice and workouts, or in his room, focused on studying for his challenging biology degree.

A humble kid who'd been passed over 883 by the 884 college football programs in the country, Morrow did not have dreams of playing in the NFL: “I never even thought it was a possibility.” But during his breakout sophomore season at Greenville, Morrow realized he could actually have a shot at the next level.

During that season, in 2014, Morrow forced a fumble, recovered it, and took it the distance for a touchdown. As he returned the ball to the referee, the ref remarked, “Keep doing your thing and you’ll make it to The League.”

“That was the first time I ever thought about playing in the NFL,” Morrow recalls. And shortly after Morrow starting thinking about the NFL, the NFL started thinking about him. Morrow quickly gained the attention of scouts, a testament to the pro football scouting network in the U.S. After all, Greenville, most known for producing Grammy award winning musicians (that includes Andre Anjos of RAC, Jars of Clay, and current artist in residence, Jorge Casas, band leader of Gloria Estefan’s Miami Sound Machine) had never attracted NFL attention. By his senior season, when Morrow earned NCAA All-American honors, no less than twenty scouts attended Greenville's practice sessions.

After the 2017 NFL Draft in April, Morrow was signed as an undrafted free agent by the Oakland Raiders. However, in the cut-throat world of professional sports, signings like this are not a destination, but a starting point — an opportunity to truly make the team come September. At that level, nothing is certain, and players can be released moments after joining. Morrow was well aware that as an undrafted rookie from a school no one had ever heard of, the odds could not be more against him.

“My initial reaction was, 'I’ve got to do whatever I possibly can to make this team.' But I also wanted to make sure I was true to who I was," he says.

Playing in front of tens of thousands of fans who came out for the first pre-season game can be overwhelming for anyone, even the guys who played at the biggest universities. But Morrow didn’t let anything impact how he felt, or how he performed.

“I tried not to pay attention to outside forces. I just focused on what I had to do that day — focus on the next five minutes.”

This focus paid off, as Morrow’s standing with the team increased with each passing week. By the final pre-season game, Morrow was playing with the first team defense, racking up several highlight reel plays ahead of the final days of the pre-season.

Last Saturday was the dreaded NFL cut day, where teams must reduce their rosters from nearly 100 players down to the league mandated 53-player roster. This is the day where many dreams die, where many young players on the fringe are asked to turn in their playbook and return to civilian life. Many once-notable players are given their walking papers on this day, including former college superstars from the Alabamas and Clemsons of the world. But Morrow beat the odds, joining seven other Division III players currently on NFL rosters.

This week, as Morrow and his Raider teammates head to Nashville to take on the Tennessee Titans in their season opener in front of 70,000 fans, Coach Schomaker and the Greenville University Panthers will be squaring off in their home opener against St. Scholastica in front of 200 fans. Will the next Nicholas Morrow be on the field at Greenville? The odds say probably not. But if some talented young player heeds the words of the prophetic referee, and continues to do his thing, who knows? He too might make it some day.

He wouldn't be the first.

Jered Schneider is a proud Greenville University alum and former Greenville football player. Jered lives in Benton Park with his wife Jordan and dog Ruthie. You can follow him on Twitter @JeredSchneider