The mural opens alongside a basketball court next month 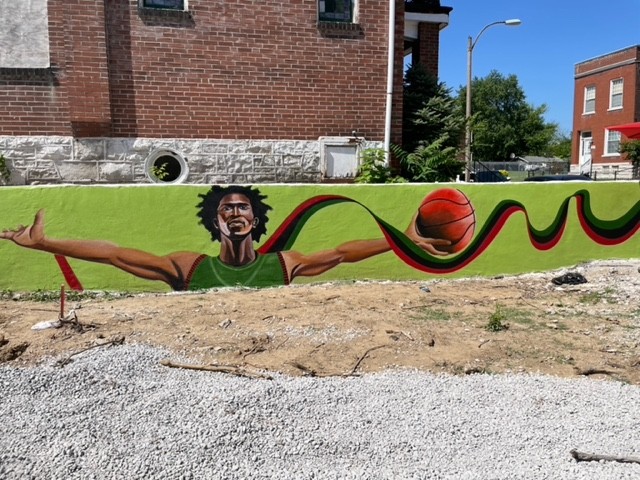 While most of St. Louis was looking for ways to beat the heat this July as temperatures crept into triple digits, muralist Jamie Bonfiglio spent her summer bathed in it.

Bonfiglio could be found daily in an empty lot at the corner of College and West Florissant Avenues, deep in concentration as a basketball player with unyielding eyes and outstretched hands took shape under her brush. A colorful beach umbrella stood between her and the sun, often left unused as she moved from one section of her artwork to another. Cars honked their support as they drove by. Neighbors stopped to extend their commentary, their praise and even their gratitude.

Thanks to Bonfiglio, what started as a dilapidated white wall along the West Florissant corridor has been transformed into a celebration of Black power and basketball set against an eye-catching, lime-green background. The mural features two players, one male and one female, each with a ball in hand; to their left is the St. Louis skyline. A red, black and green ribbon winds its way through the mural, culminating in a logo bearing the name of the court’s future team: the Vanguards.

The mural accompanies a brand new, state-of-the-art basketball court nearing completion at 4368 College Avenue. Bonfiglio, originally from Alabama, says she is proud of the work she’s done in St. Louis. But she didn’t work alone.

The outdoor community basketball court is the latest undertaking of the Black Power Blueprint, a joint program of the African People’s Education and Defense Fund and Black Star Industries, that’s aimed at cultivating institutions of social, political and economic empowerment “by and for the Black community” in north St. Louis. To this end, the non-profit has led a series of renovations and restorations along and around the West Florissant corridor, demolishing condemned buildings and rebuilding them to house community-oriented establishments such as a banquet hall, a cafe, a women’s health center and a public vegetable garden.

“We want to [be] able to bring commerce back into our community, to circulate or own resources within our community, not just extract them to the south side of St. Louis,” says Ona Zené Yeshitela, president of the African People’s Education and Defense Fund and architect of the Black Power Blueprint.

According to Yeshitela, the impetus to construct a court came from watching neighborhood kids play makeshift games in the surrounding streets, constantly thwarted by limited space and passing cars. Unlike on the southside of St. Louis, where parks and recreational facilities abound, few alternatives exist for children and young adults in north St. Louis. Yeshitela hopes to change that.

“It's going to be a state-of-the-art basketball court just like you would see in any south-side St. Louis park,” Yeshitela says. “We're gonna have tournaments for the kids, bleachers — everything.”

With the court, she also aspires to help close the racial health gap, targeting disproportionate rates of diabetes, obesity and hypertension among African people.

“It was really about rebuilding a community and giving the kids a sense of pride and a place where they can be healthy — basketball is about health as well,” Yeshitela says. She names communication skills and teamwork as a few more of the many important, non-academic lessons children can learn through recreational sports.


Bonfiglio’s basketball mural marks her second collaboration with the Black Power Blueprint. Her first, a vibrant garden vignette, overlooks the Gary Brooks Community Garden a couple of blocks away. A portrait artist, Bonfiglio’s favorite aspect of her murals is the people. It’s a sentiment that extends beyond the painting itself.

“All of the work that this organization is doing in the community is obviously making an impact because people are responding daily, people of all different ages,” Bonfiglio says. “It's uplifting the morale, from what I can tell. It's inspiring people. It's giving a sense of pride to the residents of the community.”

“Being able to walk down the street now and see a beautiful mural that they would normally see on the south side of St. Louis — to see it in their own community gives [residents] the greatest sense of pride,” Yeshitela says.

The Black Power Blueprint relies almost entirely on contributions from large and small donors alike, which are returned directly to the community by way of undertakings such as 4368 College Avenue, which the organization bought from the City of St. Louis. It enlisted the help of local contractors and volunteers to raze the dilapidated buildings on the property and install all the necessary features of a functioning basketball court, from rubber flooring to electricity for lights and a scoreboard. By the time of its unveiling in late August, the community court will have taken several months and $145,000 to build.

“It has been a real labor of love,” says Kitty Reilly, projects coordinator of the Black Power Blueprint.

The court’s home team’s name, the Vanguards, is one that Yeshitela is both proud of and confident in.

“We just want to instill dignity and pride in our kids,” Yeshitela says, nodding to the proud faces gazing out from Bonfiglo’s mural. “It’s not just basketball. It’s something much bigger than that.”