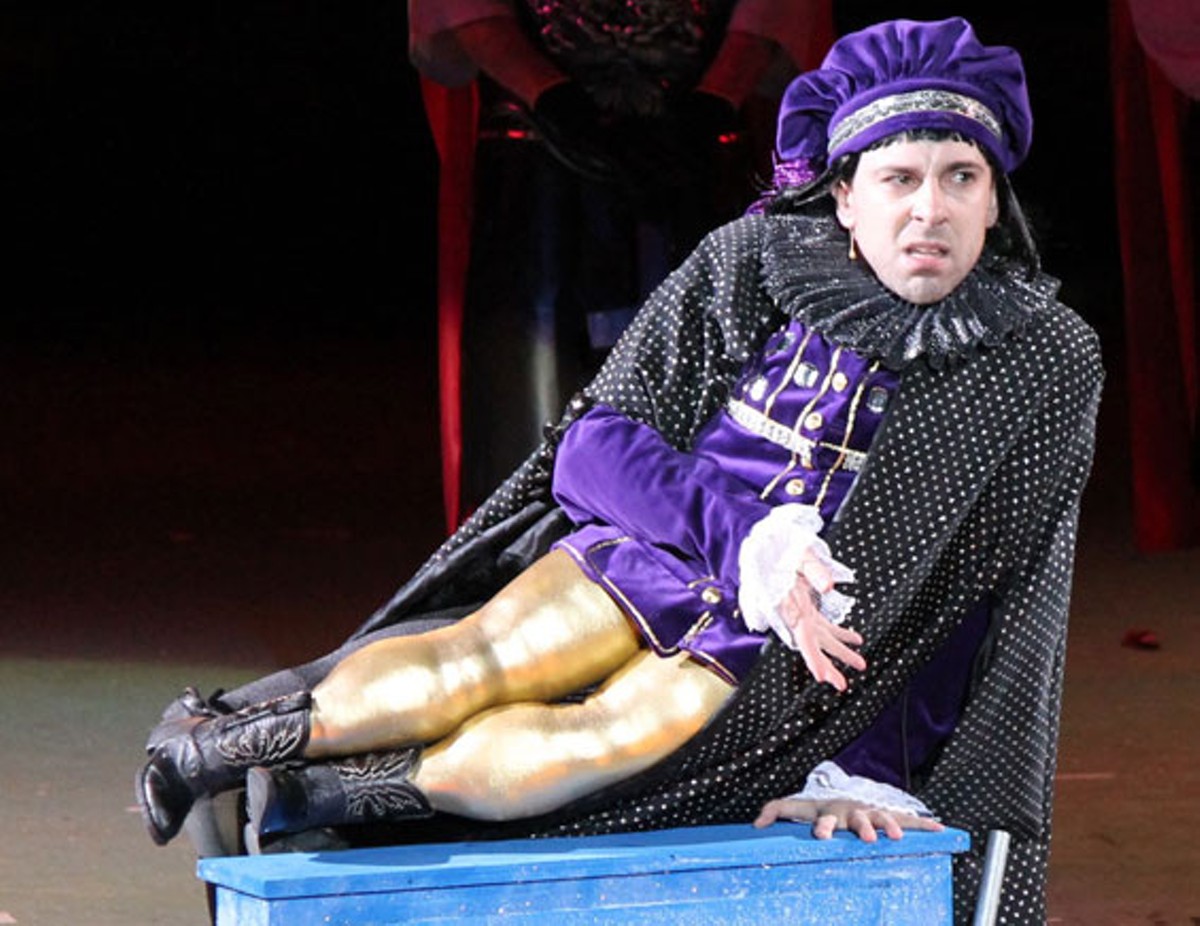 Last week the Muny opened its summer season with Monty Python's Spamalot , a glorified kids' show geared to adults. This week the tables are turned: The Muny is presenting Shrek the Musical, a children's show redolent with mature themes. In the Kingdom of Dulok, no one is as he or she seems. A nasty, belching ogre turns out to be a cuddly puppy. A coy princess has a flatulence problem. A fiery dragon turns out to be not dreadful — merely love-starved.

On a more disturbing note, beloved fairy-tale characters are persecuted for being "different." Shrek's gentle yet fervent admonition to not judge people before we get to know them resonates throughout the gentle yet quirky evening. When at evening's end Shrek sings, "A princess and an ogre, I admit, is complicated/You've never read a book like this, but fairytales should really be updated," the musical becomes a cautionary tale for our time. Its message of tolerance for the disenfranchised is as immediate as the ongoing headlines about the plight of the homeless on St. Louis streets.

Unless you've been hiding out in a bog for the past decade, you already know that Shrek! (which began its life with an exclamation point in the title of the 1990 children's book by William Steig) became a popular animated movie in 2001. The arc of the plot remains unchanged in this musical adaption. A misanthropic ogre and a garrulous talking donkey rescue a captive princess so that she can marry a despotic dwarf. But this version has its own idiosyncratic identity. Imagine if, in the early 1940s, some imaginative producer had hired W.C. Fields and Aaron Copland to write a Broadway musical. That's kinda what happened here. Pulitzer Prize-winning playwright David Lindsay-Abaire, who wrote the book and lyrics, is the champion of the odd and eccentric. Jeanine Tesori, who wrote the music, is a major composer. Together they concocted a musical that, like the characters who populate the story, shies away from slick conventionality.

Some of the songs are remarkable. In its kids-eye simplicity, "What's Up, Duloc?" a shameless defense of ethnic cleansing, is as grotesque as "Springtime for Hitler" in The Producers. The Act One closer, "Who I'd Be," soars in the same thrilling manner as does Wicked's "Defying Gravity." But Shrek is filled with special material, and it requires special care, which mostly it did not receive on opening night. Director John Tartaglia has a personal history with Shrek (he played the role of Pinocchio in the original Broadway cast), but his production feels adrift. He is not strong on storytelling and focus. In large-group scenes we often don't know where we should be looking. On opening night you could feel the audience's attention begin to wander and then wane.

Stephen Wallem, who portrays the title role, rushed his performance in Act One. In Act Two he settled in and was more effective. Surely his confidence will grow during the week. As Princess Fiona, Julia Murney seems comfortable when she can resort to Tina Fey-like sarcasm, but there's no smile in her voice. It's when Shrek and Fiona cavort their way through the exuberant Sonny & Cher-inspired "I Think I Got You Beat" that we sense how little chemistry exists between the two leads. Because the romance is shortchanged, the secondary plot about the unlikely friendship between Shrek and Donkey (an assured Michael James Scott) becomes more involving.

But most of the evening's high points are delivered by the deft Rob McClure as the pencil stub of a villain, Lord Farquaad. As he romps through the evening on his knees, McClure seems to be having a ball. The audience embraces his easy, breezy delivery. When he leaps from a high landing onto the stage floor, it's as if a cartoon frame has come to life. Would that there were more such startlingly joyous moments. But at the outset of this one-week run, the Muny Shrek lacks the passion and conviction that are required to reveal the musical in all its delightful peculiarity.