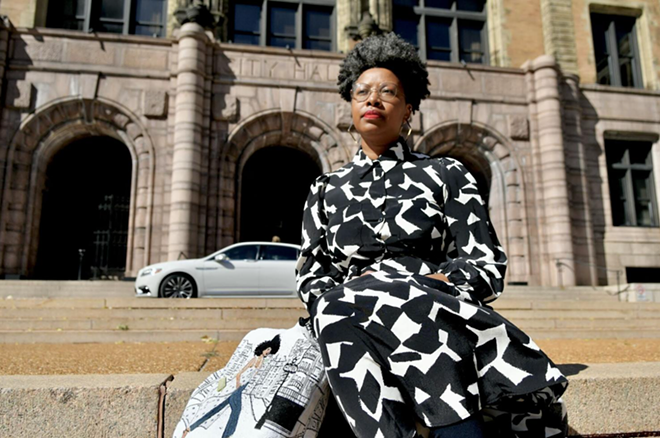 Why did Kelly McGowan start a St. Louis-politics-based YouTube series? The answer is simple.

“Man,” she says, “local government is boring as hell.”

The goal, says McGowan, is to translate policy to the public in an understandable and engaging way.

“This information is really important,” she says. “People really need to know about this stuff. But how can we present it in a way that isn't boring, it isn't dry?”


A St. Louis native, McGowan has spent most of her professional life in public health. After a year working in New York City with the Harlem Children's Zone, she returned to St. Louis in 2016, taking a job with the Emerson YMCA in Ferguson to help with childhood obesity programming.

She left the YMCA in 2020, right when the pandemic hit.

With the world shut down, McGowan found herself calling her friend –– a St. Louis native who lived in Detroit.

They ran the gamut of topics over hours-long conversations. They talked about COVID-19 and the restrictions across the metro area.

In an effort to learn more about the city’s response to COVID-19, McGowan found herself scouring government meetings. She realized how important these meetings were –– and how hard they were to access.

“Local government, zoning, which is boring as hell, but a lot of these things really impact the resources that are available and the quality of living for residents,” she says. “So I was talking to my friend about this. And she was like, ‘People need to know about this stuff.’”

She responded by pitching creative online St. Louis government-related content to the Missouri Foundation for Health in 2020. She secured funding for two years.

Most recently, her efforts have resulted in the YouTube channel. But McGowan knew that if she began a YouTube channel, she couldn’t just stare into the camera and regurgitate information from Board of Aldermen meetings.

She wanted to make the videos fun to watch. Her YouTube clips are full of efforts to wake up the audience. The inflection in her voice jumps as she recaps St. Louis County meetings and the allocation of ARPA funding. She cues in memes of Steve Harvey and music is always bumping in the background.

Her effort to spice up city government is most apparent in Straight Facts, an animated YouTube series. Over five episodes, McGowan follows the main character, Alex, as she goes on her journey to become a “local government hero.”

“[Local government] has the power to allocate funding, budgets, coins, money and investing in community,” she says. “...I feel like that is hugely, hugely impactful when we're talking about improving the health of Black St. Louisans.”

Since July, McGowan’s YouTube page has been her full-time job. She posts multiple videos per week, along with Monday-night live streams.

The goal isn’t necessarily to become YouTube famous . McGowan says the final goal is to create a website called Transform 314 that will hold all of her content. It would provide people with video commentary, live streams and information on upcoming meetings. She plans to launch in December.

In the meantime, though, she’ll continue watching hour-long council meetings and turning them into creative videos.