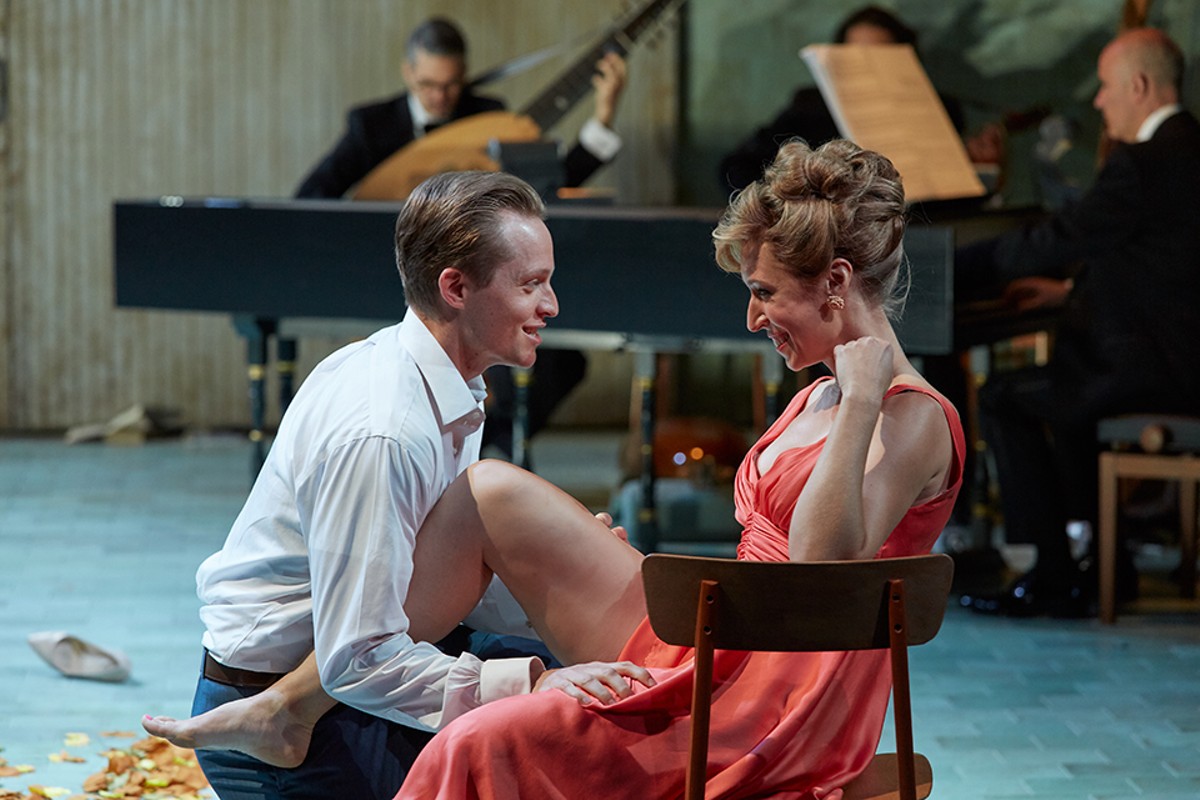 Nerone (Brenton Ryan) and Poppea (Emily Fons) are in love, or at least in lust. ERIC WOOLSEY

The Coronation of Poppea

Music by Claudio Monteverdi. Libretto by Giovanni Francesco Busenello. English translation by Tim Albery. Directed by Tim Albery. Presented through June 28 by Opera Theatre of St. Louis at the Loretto-Hilton Center (130 Edgar Road, Webster Groves; 314-961-0644). Tickets $25 to $129.
Trump as Nero? It works in a way; the Roman emperor is associated with tyrannical behavior and extravagance, derided as an impulsive rich kid who didn’t care about his own supporters. Historians called him both compulsive and corrupt — although those historians may have been more partisan than objective. Did Nero actually set Christians on fire to light his garden at night? Fake news!

Nero is front and center in The Coronation of Poppea, which had its Opera Theatre of St. Louis premiere on Sunday. Watching it, you may not think of Rome so much as the White House. This Poppea — directed by Tim Albery, originally for Leeds’ Opera North, in 2014 — has set the 1642 opera in the late 1950s. Somehow, in this smartly staged production of the 400-year-old opera, the historical events of AD 65 feel current.

And why not? It’s a tale as old as time: Nerone (Brenton Ryan) is desperate to shed his stodgy wife Ottavia (Sarah Mesko) so he can marry sexy Poppea (Emily Fons). Along the way, he’ll kill Seneca (David Pittsinger), because that’s what you do if one of the greatest philosophers of all time disapproves of your mistress. Hey, at least Seneca greets death stoically.

Albery has brought the musicians out of the pit; they form two string quartets on opposite ends of the stage, heavy on the harpsichords. They are joined by the performers in what looks a bit like an empty swimming pool, complete with a metal ladder up; this allows the gods Virtu, Fortuna and Amore to watch the action from above, but also makes for a versatile set that could be a high-walled garden, could be a banquet hall after the party’s over. The lighting (by Christopher Akerlind) brilliantly transforms the space from weary dawn to violent night, and the smart costumes (by Hannah Clark, who also did the set) have a late ‘50s style. If the show gets off to a rather slow start, it proves surprisingly gripping once you can get past the gods and into the human action.

ERIC WOOLSEY
Even Poppea's nurse Arnalta (Patricia Schuman, with Emily Fons) isn't acting from altruism.
Opera Theatre of St. Louis has been using the rah-rah sisterhood to market Poppea. “Well-behaved women seldom make history,” goes the tagline goes on one mailer. It’s a bit of a stretch (the only women helping women here are also helping themselves), but it’s hard to blame the organization for going outside the box on this one. Somehow, touting Poppea as one of the earliest operas hardly feels like a selling point to 2019 St. Louis, nor does the ancient Roman milieu.

Maybe they should have just touted the sex. You never doubt for a minute that Nerone and Poppea are having a lot of it, and that it’s ridiculously hot. Ryan is simply terrific. With his youth and slicked-back hair, he may resemble Eric Trump more than his corpulent father, but his Nerone is no joke; the emperor is dangerous. Fons, too, is formidable. Her Poppea is way too smart to be the Marla Maples to Mesko’s Ivana. That doesn’t mean things will ultimately end much better for her — just Google “Poppea” if you’re into salacious rumors, and you’ll find plenty involving both her death and its aftermath — but that’s another story for another opera. This Poppea ends with a wedding.

Indeed, the libretto seems to suggest that love conquers all; Amore (Michaela Wolz) proclaims herself ascendant, and there’s little Virtu or Fortuna can do to argue. Has Nerone not moved mountains for his beloved? Yet the staging never lets us forget the terrible human cost. Sex seduces, sex sells, sex kills. So it was even back in 65. Without a single false step, The Coronation of Poppea will take you there and remind you that while it’s good to be queen, it’s a dangerous thing to marry the king. Heads roll. Maybe someday yours.

Sarah Fenske is the executive editor of Euclid Media Group, overseeing publications in eight cities. She is the former host of St. Louis on the Air and was previously editor-in-chief of the RFT and the LA Weekly. She lives in St. Louis.
More
Scroll to read more Arts Stories & Interviews articles (1)
Join the Riverfront Times Press Club