If you were caught up in the fever for Twilight, watching movies about carnies or pondering the settlement between KWMU and its fiery, fired boss Patty Wente, here's what you may have missed.

Family Affair (consisting of twin brothers QB the Classic and Mr. R.e.p), put their celebrating on hold long enough to give a typically energetic performance. The liquor didn't seem to slow them down at all... Read More

Elf Power at Off Broadway 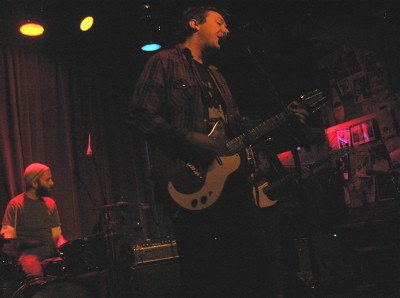 Also on Friday night, Athens, Georgia-based groups Elf Power and Vic Chestnut played at Off Broadway. Keegan Hamilton was there and has photos and a review.

The Thaxton Building on Olive Street showed off its recently restored underground lounge Saturday night -- the Thaxton Speakeasy -- with a prohibition theme. Sarah Paradoski was there and has a slide show.

On Saturday night, Little Joy and Dead Trees performed in the Blueberry Hill Duck Room. Roy Kasten was there and has a review and photos. Here's a taste:

The Dead Trees, a sweaty, scruffy rock band from Portland, Oregon, was warmly, generously received, as if the audience had been following the dudes for years, though they only have an EP and a just-released full length, King of Rosa, to their name. Turns out the show was a homecoming, as bassist Tad Dahlhoff is a St. Louis native... Read More

SNL's Post-Election Roll
If you've found yourself giggling at Saturday Night Live in the wake of those uncanny Sarah Palin (remember her?) impressions by Tina Fey, you might have caught this bit with Ludacris, T-Pain and Tim McGraw on Saturday. Watch the clip.

It's a short work week coming up and there's plenty to do. Check out the RFT Calendar.