Photo Exhibit Shows the World Through the Eyes of St. Charles Homeless 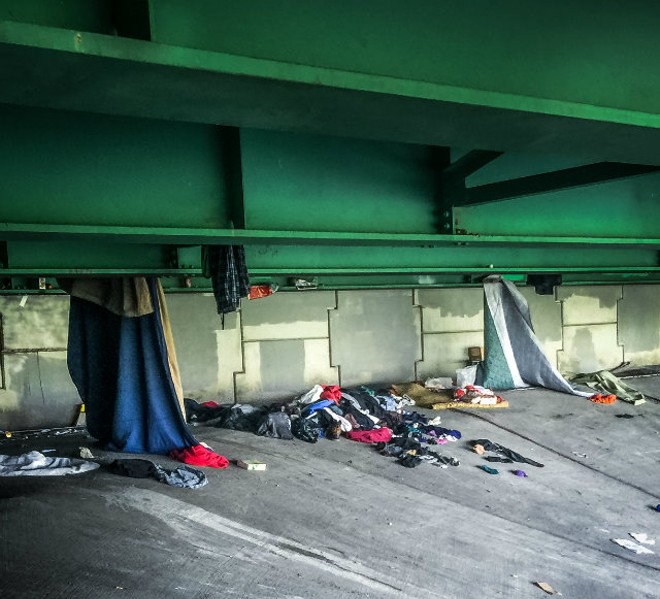 COURTESY OF STS. JOACHIM AND ANN CARE SERVICE
The photographs being displayed at the new group show opening at the St. Peters Cultural Arts Centre (1 St. Peters Centre Boulevard, St. Peters) tonight aren't the work of professional artists — but they offer a startlingly new perspective, and have a fascinating story to tell.

The photos were shot by members of St. Charles' homeless community, using Fuji Film Flash cameras given to them by Sts. Joachim and Ann Care Service. The Roman Catholic program, which works with impoverished residents of St. Charles, Warren and Lincoln counties, distributed 100 disposable cameras, asking its clients and contacts to use them to depict their lives.

They got 25 back — "about what we expected," notes Pam Struckhoff, director of program services. From that, a judge's panel culled the twenty images (plus five staff picks) on display tonight.

COURTESY OF STS. JOACHIM AND ANN CARE SERVICE
Struckhoff acknowledges that the idea came from a similar show overseas. Still, she believes this one, titled In Plain Sight – Homelessness Exposed, is the first of its kind in the Midwest.

The fact that it's being mounted in one of the most affluent parts of the St. Louis region only makes it more relevant.

"I have a gentleman that I work with who sits at a busy intersection in St. Charles," Struckhoff notes of one of her agency's clients. "Yet people in this area will tell me, 'We don't have any homeless people here' — even while there's a homeless person sitting less than a mile from us. They never saw him. They never looked at him. And he was there every day."

By giving men like that a camera, Sts. Joachim and Ann forces viewers to see the world from their perspective — not only to acknowledge their humanity, but to see the brutal reality of the world they live in.

Even for workers at Sts. Joachim and Ann, who deal with poverty every day, the photos have been eye-opening. Karen Grant, the agency's director of development, says she found herself marveling at the community depicted: "Just like any other family, they stick together, they care for each other, and even if they're not getting along, they're going to take care of each other."

Struckhoff mentions a photo showing a young girl washing her family's dishes in a cheap hotel bathtub. "Their survival instincts are amazing," she says. "I was fascinated by the resilience they showed."

The people who agreed to take cameras were a self-selecting group, Struckhoff notes. Those who feared their boss learning that they lacked housing, or were concerned about opening their children up to ridicule, generally didn't end up participating. As a result, she believes the group skews more toward single men than St. Charles' homeless population as a whole.

But their photos show that, whether St. Charles wants to admit it or not, the homeless live right alongside their more affluent neighbors. Unlike St. Louis, they might not be sleeping on the sidewalk, but they're there — "in parks, in car washes, in creekbeds and local motels," as Struckhoff puts it. Now they're showing all those places through a camera lens.

COURTESY OF STS. JOACHIM AND ANN CARE SERVICE
The photos will be on display in St. Peters through August 20. An audio tour of the display tells the stories behind the photos, while a contest allows viewers to vote for their favorite photos. The winners get a prize, and on top of that, a live auction on August 19 will benefit programs that assist the homeless.

After that, another twenty images from the project will go on the road as a traveling show, raising awareness of the secret lives hiding right there in plain sight.